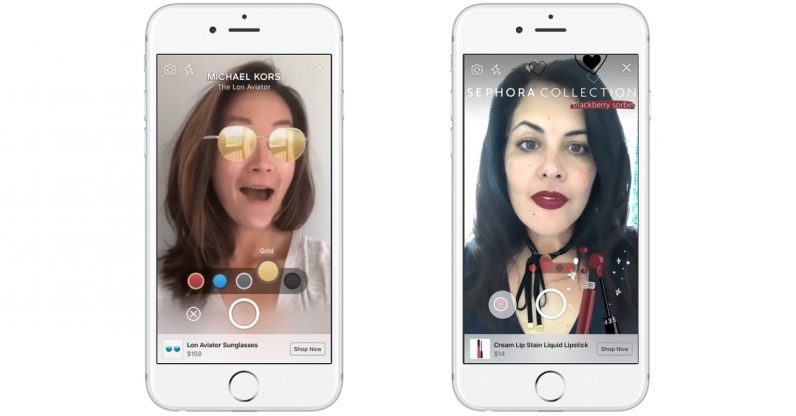 Facebook is rolling out a new ad format that uses augmented reality to encourage you to sample some of the products on display.

The details: The ads appear similar to every other Facebook ad out there, appearing as a promoted tile on your Newsfeed — except they have a “Tap to Try it On” option (presumably with other wording if it’s not something you try on). When you comply, Facebook accesses your camera and proceeds to put an AR version of the advertised object on your person.

The first company to test out the ads is Michael Kors, which allowed users to see what its sunglasses would look like on their own faces. Facebook showed an example of what a Sephora ad might look like, though I don’t think I could drop serious cash on that overexpensive warpaint without seeing what it looks like on my actual skin.

But wait. There’s more: The AR ads are supposed to target holiday shoppers, though I would point out the main purpose of the AR ads is to try things out on yourself, while the main thing you’re buying during the holidays are gifts. The announcement implies you can also post photos of yourself “trying on” the items to your Facebook Story — one wonders if this might be a new way of passive-aggressively telling your friends what you want for Christmas.

Because apparently the world can only have room for one social media platform with augmented reality ads, Snapchat’s stock took a hit in the wake of the roll-out of these ads. Still, it’s rumored the teen-friendly photo app is partnering with Amazon on some kind of “Camera Search,” so we may be seeing an ad innovation from it as well.

Read next: Report: The Mac mini is finally getting an update after nearly 4 years