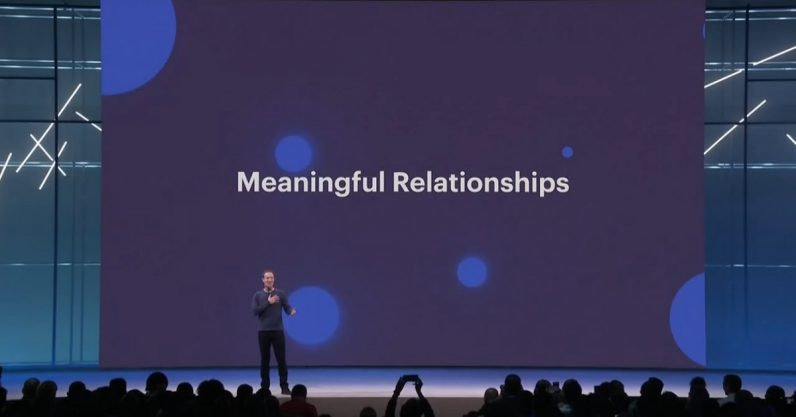 In one of the highlights of today’s F8 conference, Facebook announced it was entering the online dating space with new features. These new features, built into Facebook’s existing app, would use information from your profile to match you with potential paramours based on mutual interests and friends.

During his F8 keynote, Zuckerberg mentioned one of his favorite stories from Facebook users is marriages between couples who meet on Facebook. He described meeting people who’d point at the kids who have spawned from said pairings and thank him (hopefully it’s less uncomfortable in real life than how he describes it). He went on to say the new features the company’s introducing will be for “real, long-term relationships, not just hook-ups.”

Wife: Facebook isn't for people you want to date.

Wife: People you want to monitor from a safe distance.

If I had my choice of apps to use to find a date, Facebook probably wouldn’t be one of them. For all its claims to being a vast network of social connections, it’s not exactly the place where I present the most attractive side of myself. These features feel more like something that’s bolted to core Facebook than a service that can stand on its own.

To put it simply, Facebook is for visiting with my friends, posting pictures of my dog, catching up on the latest gaming news. I go there to watch videos about animals, or talk about work, or correct my friends when they misquote Shakespeare. None of it is how I’d choose to show myself to a person I just met and might be interested in — not at first, anyway.

If I had my druthers, I’d rather use an app designed with the goal of curating your dating experience from the ground up, not just pulling paramours going to the same Facebook events.

Coincidentally, shortly after Facebook made this announcement, the stock of Match plunged precipitously. Match – the company that owns Tinder, OKCupid, and Plenty of Fish – saw its stock plunge precipitously. It still managed to throw some shade at Facebook in a statement to TechCrunch:

We’re surprised at the timing given the amount of personal and sensitive data that comes with this territory. Regardless, we’re going to continue to delight our users through product innovation and relentless focus on relationship success.

Read next: Instagram should focus on quality, not quantity, in fixing its Explore tab