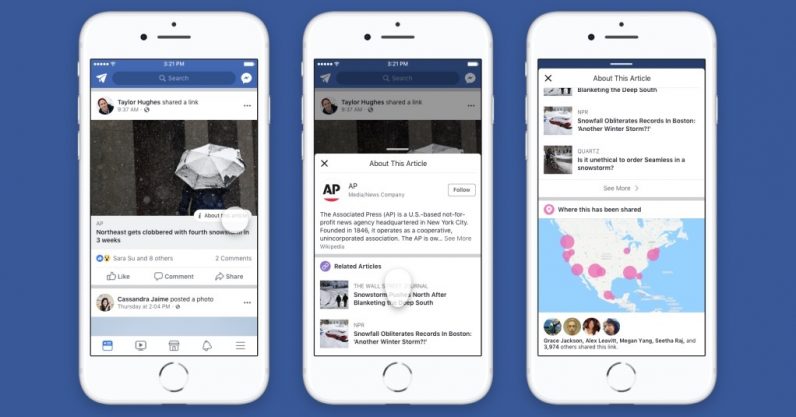 Facebook today announced it was rolling out an update to its News Feed to combat fake news. While the initial purpose of the update appears to be giving users context for the news stories they read. But the update also has a hidden second purpose: Showing you which of your friends are sharing bogus news stories.

The new update, first tested last year, gives users more context for news posts. By tapping on the “i” icon next to the story’s headline, you’ll be shown the source’s Wikipedia article, related articles, and a map showing where the story has been shared before — and by whom. That means, if you come across a story whose premise or politics you don’t agree with, you’ll be able to see which of your friends has already shared it.

The former information tidbits are pretty standard — having access to a non-Facebook summary of a news source’s history and a list of their recent articles is a good way of gauging not their popularity and views, if not reliability. But a hidden upside — or downside, depending on your perspective — might be seeing what kinds of news your friends are sharing.

Probably some of you already have your entire friends list pegged for their viewpoints, and you already know which of your friends are going to be getting the temporary mute during the next election. But for those of you with big friends lists, who might not already know, you’ll be able to see what they have been sharing and where it comes from.

Of course, this doesn’t take into account why your friends might have shared a story from a particular site — perhaps some of them included the link merely to comment on the contents without endorsing its viewpoint. But that’ll require more research on the part of the user than Facebook.

According to Facebook’s developers, the original idea came from the “Related Articles” you can find under news stories on your feed. In order for this to work, the authors of the stories have to have author tags implemented on their page.

The update will be available to everyone in the US starting today.

Read next: Facebook confirms: Donald trumped Hillary on the social network during 2016 election