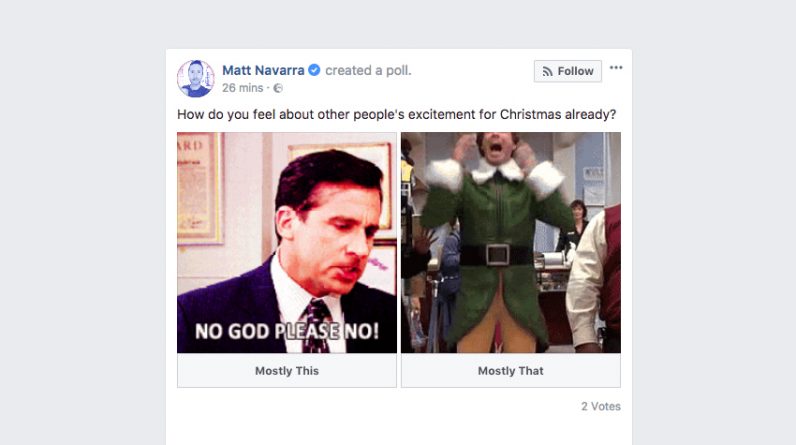 Facebook is about to turn scrolling through your feed into an even more obnoxious drill. The social media giant appears to be currently testing a new poll format that nobody asked for: voting with animated GIFs.

The feature practically works in an identical way to the standard poll format, but lets users vote with GIFs instead of simple text responses. Much like regular text-based polls, it is up to the creator of the poll to choose the GIFs users can react with.

The select few users in the test group can follow these steps to try out the feature:

Check out this video demonstration to get a better idea of how the feature works:

For background, Facebook polls have been around for quite some time now, but so far they were strictly text-based and mostly restricted to Pages – not personal accounts. In fact, the social media heavyweight experimented with GIF polls for Pages on a few occasions earlier this year, most recently in September.

But now it seems the company is finally prepping to roll out the feature to all users – whether you like it or not.

New! Facebook is testing polls with GIFs for Pages pic.twitter.com/o2Ri82F8yU

“This adds yet another way for people to express themselves and engage with their friends and family, and could actually useful as much as it is fun. Although some users may start to tire of endless GIFs in their News Feed making it look even more Myspace-esque,” he added.

Facebook has been gradually revamping its Status update feature with more options. Over the past year, the company introduced colorful Status updates; it also toyed around with adding a similar color functionality to its comment section, though it seems that plan has been shelved for now.

Quite frankly, I sort of hope the GIF polling feature will follow the same path.