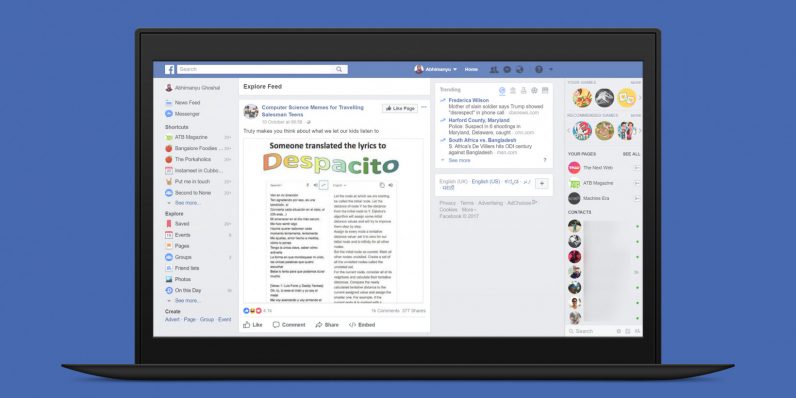 The feature has been available on mobile since April, and been in testing for a while on desktop. Facebook’s recommendations are based on your tastes, and also include popular posts from the vasts expanses of the social network. You can find it by visiting facebook.com/explore or clicking on the rocket icon labeled ‘Explore Feed’ in the Explore menu on the left of your news feed.

That’s just fine, and it probably works well enough for Facebook’s needs to present you with more content, keep you on the site longer, and deliver more ads between posts and within videos. What it doesn’t do is help you gain more perspective by delivering content you may not encounter in your day-to-day browsing, and that leads to people staying stuck in their echo chambers.

As I wrote last November shortly after President Donald Trump’s electoral victory in the US, Facebook allows us to create filter bubbles for ourselves and perpetually see only content that’s agreeable to our views and tastes. That’s the sort of thing that leads people to have no idea about why an incredibly unlikely candidate with zero political experience could become the president of the United States.

It’s also worth noting that Facebook is really good at figuring out what you’ll like and what might be relevant to you: save for the unfamiliar Pages that the content originates from, my Explore feed is awfully similar to my own News feed, filled with comics, science and tech posts and videos, as well as India- and Bollywood-specific memes. Nothing in there that I would be annoyed with in the least.

To be fair, that’s not entirely Facebook’s fault: it’s ultimately up to us to shape these bubbles we live in online, and it’s us users who inadvertently curate feeds that only suit our world views. But it’d be nice to have a way to see what others outside our circles see – kind of like The Wall Street Journal’s excellent working concept from last year.

Sadly, that may not be on the cards for Facebook now or ever. Showing you posts you haven’t indicated interest in is a wrong move from a product management standpoint: you’re not likely to engage with the content, and you’ll probably leave the page sooner than if you were shown content tailored to your tastes.

The goal for Facebook is to keep you glued to your screen longer so it can make more money from advertising, and idealistic features like this simply don’t make business sense. If you’re looking for a way to understand opposing views better, the Explore feed isn’t the answer. But if you enjoy what Facebook already has to offer and want more of the same, this will be right up your alley.

Read next: Review: Meizu's M6 Note is a budget phone with a flagship portrait mode