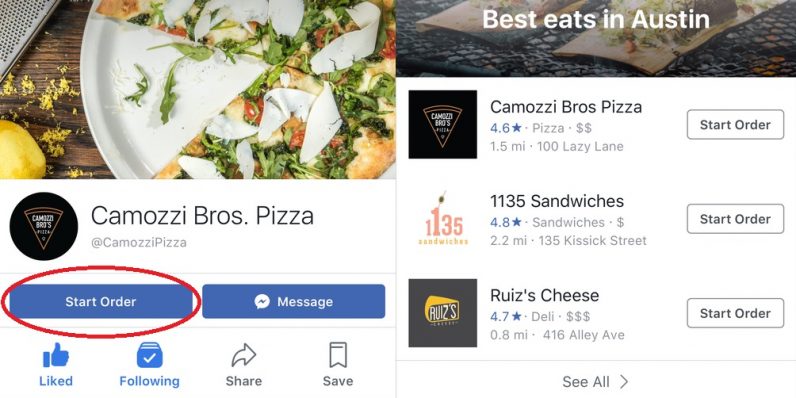 Facebook today announced it’s rolling out its Order Food option to all users. The site is partnering with food delivery services to allow users to order food directly from a restaurant’s Page.

To order food, visit the page of a participating restaurant and hit the “Start Order” button. You’ll be directed to choose an ordering service and a time, and from there you select a food order from the menu.

This feature has been in testing for a few months now — we first noticed it in May, when it was rolled out to some users. Now, it’s coming out to everyone, with more food delivery partnernships. In May, it was Slice and Delivery.com doing the heavy lifting, but now the company has also partnered with GrubHub, ChowNow, EatStreet, (wow, how many of these rhyme?) DoorDash, Zuppler, and Olo.

Users can also order directly from certain restaurants, including Chipotle, Five Guys, Jimmy John’s, and Jack in the Box. To find a restaurant, open the “Order Food” section (with the knife and fork icon) and look for restaurants with delivery and pickup options.

According to Alex Himmel, Facebook’s VP of Local:

People already go to Facebook to browse restaurants and decide where to eat or where to order food, so we’re making that easier. We’re combining options from a number of restaurants and food ordering services, so you don’t have to search through multiple places and eat what you want, in just a few taps.

Notably,  you will need accounts with certain food delivery services before you’ll be able to use them — Himmel uses Delivery.com as an example. This cuts down on the convenience somewhat, but at least Facebook will let you handle that within the app.

The update rolls out today for US users on Android, iOS, and desktop. I look forward to never again having to leave my house.