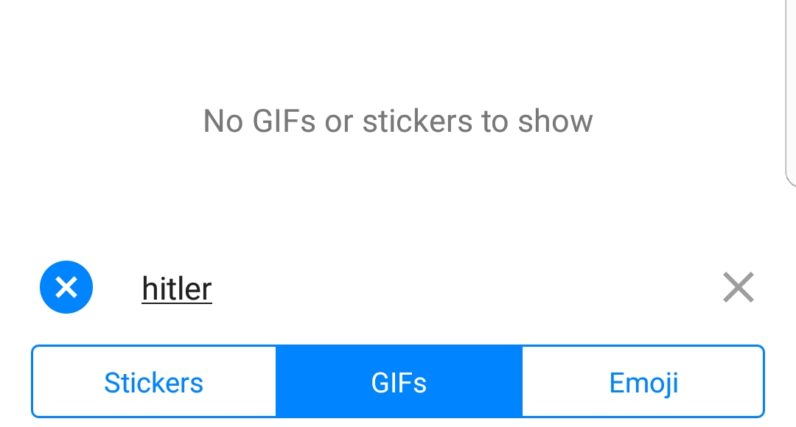 We might have to put the GIF vs JIF debate aside for a second: It turns out Facebook is flush with animated images that could potentially upset a large group of users on its platform, including content showing upbeat animations of Hitler’s name and other potentially insensitive language.

Curiously, while Facebook filters out some of these searches from the Messenger mobile app for iOS and Android, this isn’t the case on desktop.

The images in question are auto-generated text-GIFs based on user input sent through the search feature. All of these templates were generated by third-party service Legend, which is one of the many content providers the social media titan has partnered with.

In all fairness, the GIF-finder on mobile doesn’t weed out such imagery entirely either, with some potentially distrubing content showing up when looking up certain keywords partially.

Here are a couple of examples captured by our social media director Matt Navarra:

Interestingly, the comment and status post GIF feature (on desktop) seems to be more heavily moderated than the one in chat.

Here is what happens when you search for the same words there:

Facebook initially introduced the dedicated GIF button in chat and Messenger back in 2015. In fact, with almost 13 billion animated images sent via the social media platform just last year, the company recently extended the functionality to regular comments and status posts.

But despite the popularity of the functionality, Facebook opted not to monitor the GIFs itself and instead trusted its community with the task to self-report potentially controversial and insensitive content. The company would then forward such reports to the supplier and ask them to remove any violating images.

Unfortunately, it appears this strategy hasn’t been working out exactly as intended so far. Facebook has faced backlash for spreading antisemitic animations on at least two occasions this year alone.

When asked about its GIF removal policy back in July, a Facebook Messenger spokesperson told Forbes the following:

The GIFs that can be sent on Messenger are supplied by third parties, and we apply our community standards to all content on Messenger and Facebook. If we are made aware that a third-party supplier is violating our policies, we reach out to the supplier to ensure they address the issue by removing the violating content.

One thing to keep in mind is that not all images containing controversial material are inherently offensive.

In fact, Russian activists used colorful images showing President Vladimir Putin in drag to protest the country’s anti-gay laws. The tactic was so successful that Russia eventually banned the image in question.

So before you go on and report an image, you ought to ask yourself: Is calling for more censorship the only solution here?

Read next: Google to unveil the new Pixel on October 4