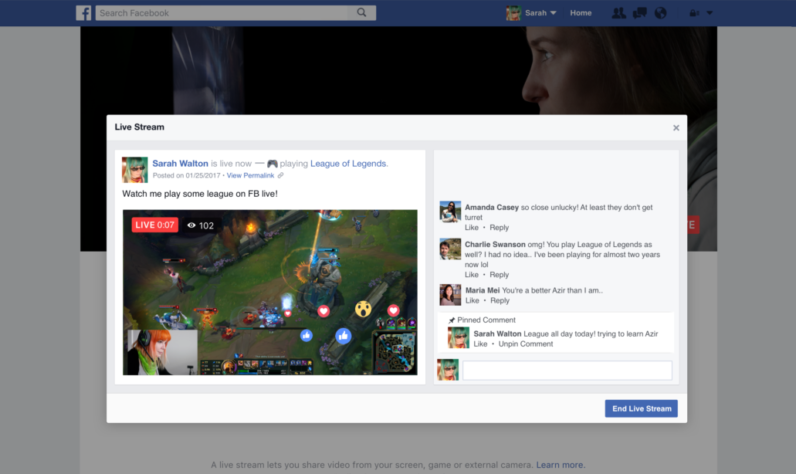 After bringing live streaming to mobile and quickly dominating the space, Facebook is now doing the same for desktops and laptops.

Starting today, anyone can stream through Facebook’s web interface. The feature has actually been available on Pages for some time, but I’m sure plenty of everyday users want to stream whatever mundane thing they’re doing at their desks as well.


In all seriousness, desktop support opens up Facebook to whole new kinda of livestreaming. Currently, user broadcasts tend to be boring shakycam messes, because there’s only so much you can do from a smartphone. With support for standard streaming software, Facebook can now do more interesting things like screen sharing, inserting graphics, or using multi-camera setups.

That means Facebook is becoming a legitimate – if barebones – platform for gaming streams. You can start a stream from your News Feed, profile, or this link, and then paste your server URL or stream key just like any other service. You can even label the video with what game you’re playing.

Facebook isn’t going to take over Twitch anytime soon, but streamers with a prominent following might think twice about where they want to broadcast. Moreover, streaming onto a familiar platform like Facebook may be less daunting for gamers who’ve never been interested in streaming on Twitch, or who simply want to share streams with friends and family instead of online strangers.

Gaming aside, Facebook also sees the desktop feature being useful for things like Q&A’s, vlogs, tutorials. Whichever way you cut it, Facebook livestreams are about to get a lot more variety. Head on over here to learn more about how to stream on desktops.

Read next: Sorry Apple, but the iMessage App Store sucks