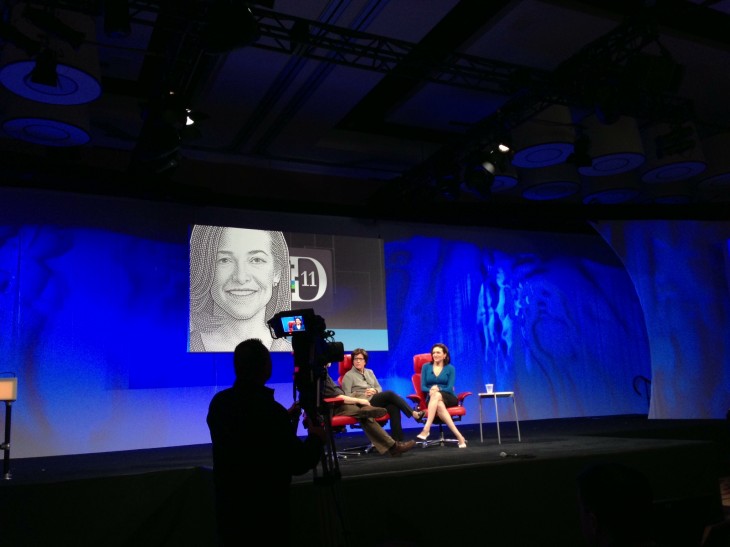 Facebook COO Sheryl Sandberg spoke today at the D11 conference in southern California. “Men still run the world, and I’m not sure how well that’s going,” Sandberg opined right off the bat.

One of the major issues, she says, is that gender issues simply aren’t being discussed enough. “When you say the word woman people think you’re asking for special treatment or about to sue them.”

This leads to the issues surrounding women in leadership roles not getting enough attention. This goes for all fields, she says, but there are particular issues with tech.

“Every industry is overwhelmingly led by men…the tech industry has a particular challenge, which is women going into STEM.”

Mid-1980’s the rate of women entering computer science fields was around 35%, now it’s around 20%. Sandberg says the rate is ‘plummeting’.

Sandberg says that the gendered expectation is that women are ‘communal helpers’ and that men are supposed to take charge. This is often surfaced when women are called ‘bossy’. She then asked the men in the audience to raise their hands if they’d ever been called bossy, a handful did so. She then asked the women the same question and many raised their hands. Sandberg says that those results are fairly typical.

She attributed this to a failure to speak about gender issues and a failure of HR departments which generated an aura of fear around them.

Sandberg also spoke about conversations surrounding things like maternity leave. She asserts that there isn’t a regular dialog that happens between bosses and employees around leave, instead it’s something that people are afraid to talk about and that hurts the employee and the company.

The relationship between Sandberg and Facebook CEO Mark Zuckerberg was also a topic of discussion. She says that they have a feedback arrangement which allows them to keep in step every week. Zuckerberg is most comfortable focused on product, and Sandberg says that he’s happy there and that it’s simply a matter of what they focus on.

Sandberg was then asked about the success, or lack thereof, of Facebook Home.

“We consider it v1, very early,” says Sandberg. “Obviously like any company we would love to do a v1 and get everything right.”

Sandberg also mentions that she feels that people are reading the situation wrong when it comes to Facebook’s ‘power’ on mobile. “We’re all building on iOS and Android and they’re integrating Facebook as well.”

She noted that the reviews that they’re seeing with regard to Facebook Home were ‘bi-modal’, almost all one or five stars.

When quizzed about whether Facebook was worried about a departure of teen users, Sandberg said that the worries about teens leaving Facebook when their moms joined were unfounded. Despite other services like Snapchat and others, Sandberg says she’s convinced that there is plenty of time left over in the schedules of users to use Facebook more.

One statistic she pointed to was that Pew says most people spend 6 hours a month on social services, and 34 hours a week watching television. This points to more room for growth in use of those services. She also said that 60% of Facebook users return every day, up from 50% a couple of years ago and that 94% of teen survey respondents said that they were on Facebook.

The Instagram purchase was also a topic. “Oh I think it’s looking like a very good deal,” says Sandberg. “It took them two years to get to 100M users, it took Facebook four.”

She also addressed the rumors around Waze, and while refusing to deny acquisition rumors like Apple CEO tim Cook, she said that mapping was obviously important and acknowledged that Facebook couldn’t make everything in house.

“It would be great if we could build everything,” Sandberg said. As an example, she said “I think an ad network is a pretty good idea for Facebook.”

Still, no announcement of plans to build that network, or to buy one.

Read next: Microsoft: Office 365 passed 1m subscribers in just over 100 days, making it the best-selling Office yet