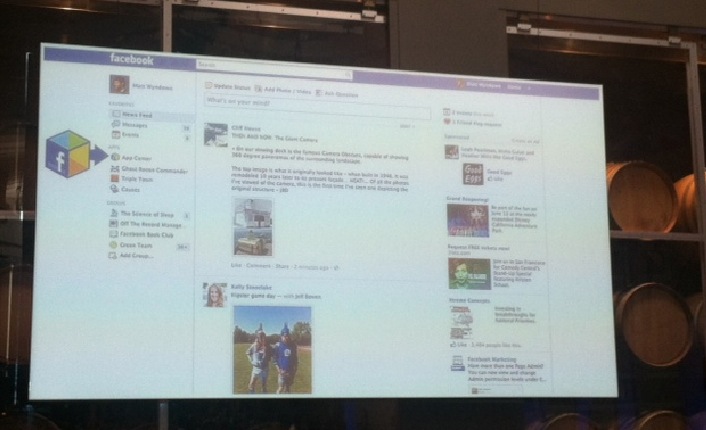 We’ve known it was coming since early May, and Facebook has finally started rolling out its App Center to users.

At an event in San Francisco which was advertised to us with the theme of “Apps and Drinks”, the company is discussing all of the potential for developers to get their applications submitted and approved so that they can grab a whole bunch of social-hungry users. In case you forgot, Facebook now has more than 900M of them.

Facebook also shared a bunch of interesting stats at the launch announcement:

Oddly, the App Center is only available to US users right now, but the company says that a worldwide launch will happen over the coming weeks.

Like we mentioned earlier, the App Center is Facebook’s way of highlighting the top apps in a few different genres:

Basically, any app that hooks into Facebook’s social and Open Graph will find its way to the App Center, but it’s launching tonight with more than 600, including Nike+ GPS, Draw Something, Pinterest and a host of games. Instead of waiting to see what your friends are using by way of the stories you see in your News Feed, you’ll now be able to proactively navigate the huge amount of opportunities to find cool things to do.

You’ll find the App Center on both the web version of Facebook as well as its mobile counterparts. The experience that Facebook is shooting for is to help speed up growth for developers who are creating applications which rely on Facebook for authentication and engagement. Some of these apps are doing just fine on their own, but others will need a boost.

Every app in the App Center will have a full description and screenshots, which lets you preview the app before installing it. You can send any apps that you see on the web version of the App Center directly to your mobile using the ‘send to mobile’ feature. Any apps that you select on the mobile versions will forward you on to the stores that they belong to, whether that’s Google Play or Apple’s App Store.

Facebook even one-ups Apple in the disclosure department, telling users the exact information an app needs and letting you choose who can see the activity from the app in your feed on Facebook.

Developers will also be able to offer paid apps on the Facebook platform, which should help boost sales as well as interest in shifting to its platform. The company gave such an advanced heads-up so that developers could start filling out their App details page early. Those who got their submissions in before May 18th got a priority review spot.

Since Open Graph has exploded after launching last year, Facebook is taking this opportunity to reign everything in and toss the apps who leverage its features the best into a categorized store. Unlike Apple’s App Store, you’ll be able to dig deeper into the actual engagement the apps are seeing, rather than just download numbers.

The App Center should be live at this link once it has rolled out to you.

Read next: LinkedIn killing all leaked passwords, says no account logins leaked and the law is involved