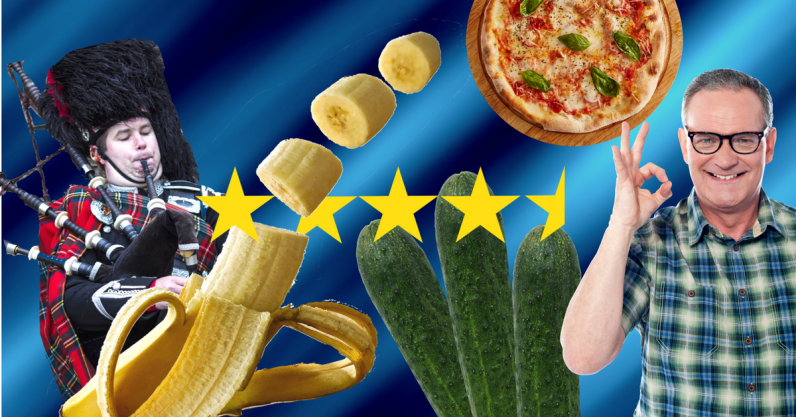 While browsing through the EU’s massive online presence — you know, for fun — we came across a pretty interesting website run by the European Commission’s representation in the UK. The website is called Euromyths A-Z index and, like the name implies, has a list of debunked misconceptions ranging from semi-plausible to the absurd — surprisingly coupled with a five-star rating system.

The list mostly focuses on myths that UK citizens might have been exposed to during the Brexit campaign. It’s full of familiar and less familiar lies — most of them pretty entertaining — which most people hopefully recognize to be untrue, although that could be optimistic considering Brexit actually happened.

The classic myths include the EU’s obsession with the curvature of bananas, supposedly wanting wanting to ban too curved or too small bananas. It sounds so ridiculous that you wonder why it’s even needed to include in the list — until you hear that one person actually voted ‘leave’ over straight bananas.

Bananas were not the only type of nutrition that was used to try to bring down the Union. According to the index, it seems that EU skeptics have long been concerned with the union meddling in food-related matters, as the index is filled with food myths.

The EU supposedly wanted to outlaw certain pizza sizes, tried to force Italians to make mozzarella cheese using powdered milk, and was considering a ban on mushy peas. It seems like myth-makers strongly believe in the old proverb saying that a best way to a man’s heart is through his stomach.

Other weird myths include banning the use of the word ‘love’ in pubs, as well as playing darts, and banning boilers in miniature steam trains. 15 years ago, there were apparently also myths circulating that the EU wanted to ban the Queen’s beloved corgis and force her to get her own tea.

The best thing about the site though, is its seemingly pointless rating system which allows one to rate myths with one to five stars based on… well, based on whatever you want. And if there’s a rating system in place, I’m sure as hell going to express my opinion, especially when an esteemed institution like the EU is asking for me to weigh in.

After having scoured the list and voted on a couple of myths — EU approves dangerous devices (1 star, bland), bananas can’t be too curved (4 stars, a classic), and EU banning bagpipes (5 stars, fresh) — I started to get curious what the system was actually for. Is a five star myth convincing or just funny? Why is would the EU want me to rate myths?

That’s why I decided to dig a little deeper and finally managed to get in contact with an employee of the European Commission. Unfortunately, his reply was deeply disappointing. He told me that the system was merely a simple blog post rating system and implied that it didn’t serve any particular purpose. Sad.

However, we don’t necessarily have to listen to him. The world must know how many stars you think each EU myth is worth, so go to the site and start rating!

Read next: Do you want a black box AI deciding whether you live or die?