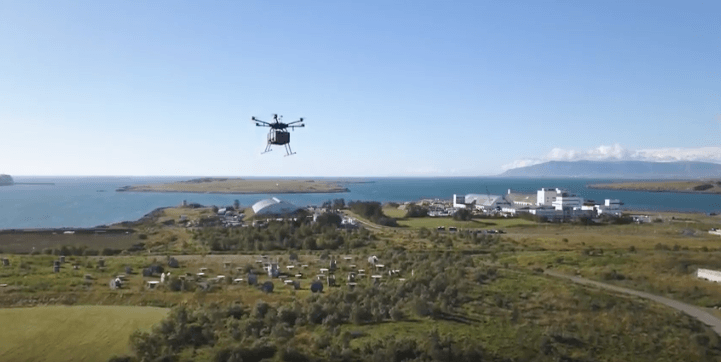 Right away I could think of hundreds of reasons why drone deliveries wouldn’t work in Iceland. The regulation can be cumbersome, the weather conditions aren’t optimal and I don’t really see drones being that more efficient than delivery trucks. Also, I’m just a really cynical person in general (Winter is coming).

The whole saga started when TNW received the original press release. I sagely advised my coworkers not to cover it. I suspected Iceland’s remoteness would deter any tech reporters to actually make sure whether it was real, which would be great for scammy PR people trying to create hype around their product. The story suspiciously had all the essentials for a click-worthy article: trending tech, new usage, and a cool and incredibly popular location, Iceland — all without mentioning Iceland’s terrible terrible weather (there’s a reason I emigrated).

I was going to ignore the story, but after the embargo lifted, sites like The Verge and Mashable started running stories with these kinds of titles: Hamburgers and beer are about to start flying through the skies of Reykjavík, Iceland, Beer Delivery Drones Have Arrived in Iceland, and Icelanders can get burgers and beer by drone, and we’re all moving.

Anybody who’d be excited about this news would be sorely disappointed because delivering alcohol is illegal in Iceland — you can only buy beer at the state-run liquor store (closed on Sundays) and a pint at a pub will set you back at least 8 euros. This inaccuracy really made we want to uncover this lousy PR stunt — so I hopped on the next plane to Iceland to find out (or actually, just happened to have a planned vacation. I’m not that dedicated).

“I have no idea where they got the beer thing from,” said Maron Kristófersson, CEO of AHA, over a cup of coffee at AHA’s headquarters in Reykjavík. “I guess that’s the only part of this story that had a touch of ‘creative journalism’ — somebody was clearly very thirsty when he wrote the article. Beer deliveries are not possible in Iceland, legally speaking, but we do deliver drinks — just non-alcoholic.”

Currently, AHA just has one active delivery route for its drone deliveries which has been approved by transport authorities in Iceland. That means that you’re not able to get your sushi and non-alcoholic beverage straight to your door (which sucks) but Maron says that more routes and door-to-door delivery is in the works.

“We’re working on getting the deliveries closer to people’s doors but right now what we’re working on is getting the public to understand the safety regulations and basically getting them to get the right perception about drone deliveries. I don’t think people would like it if drones would all of the sudden start flying above their houses without understanding a little bit about what’s happening first. We have taken all safety precautions in the routes we’re choosing now, making sure that people get the chance to get a what you could call a ‘soft introduction’ to drone deliveries.”

Right now AHA is making about 20 drone trips a day with the modified DJI Matrice 600, when weather permits. The thing is that the current drone can’t really handle rain, sleet and strong winds — all of which are common in Iceland (even in summer).

However, DJI’s upcoming drones will be able to handle any type of precipitation with simple modifications — and the wind isn’t as much of a problem as you’d think. It was quite windy when I went to AHA’s headquarters but the drone handled itself easily in the skies. The main concern is the windspeed at the landing sites, if it’s more than 4 m/s it could make the drone trip over during landing.

But despite the current drawbacks, the drone deliveries are already saving the AHA a lot of time and resources — drones actually make more sense to use than cars. The upkeep costs are way lower, they need fewer employees, and it’s saving 20 minutes per delivery by bypassing traffic. Maron also adds that increased automation in deliveries via drones is a perfect solution for a country like Iceland, where unemployment is virtually non-existent and salaries are incredibly high.

But will the practice of drone deliveries actually last? There’s been loads of gimmicky PR campaigns — like Domino’s pizza delivery robot — but the ‘revolutionary’ technologies seem to disappear as soon as they’ve been announced. I mean, have you ever heard of anyone having a pizza delivered by robot?

For a layman it seems like the only way to make drone deliveries a regular part of our lives is to guarantee door-to-door delivery. But will that be possible in Iceland? Or anywhere else for that matter?

I had a call with Flytrex CEO, Yariv Bash, who revealed that door-to-door deliveries might actually not be that far away.

“We’re working together with AHA and Icelandic authorities to start delivering to dozens of points in residential areas in Reykjavík. We hope to have that operational by the end of the year,” says Bash.

The idea, according to Bash, is to have the drones lower down deliveries into people’s backyards with a cable. That would avoid the dangers and difficulties of landing and increase the amount of suitable locations. This technology should be operational in the next few months — but its implementation relies on regulators, who are surprisingly positive according to Bash.

Despite having been skeptical at the beginning, I have to admit that this approach to drone deliveries might actually work. Flytrex’s tech allows for a single person to monitor up to 12 drones at a time and it’s designed for regular people to operate, not engineers. Flytrex is also ‘drone agnostic’ so it can simply implement the best drones to its system at any given time.

To further support that Flytrex’s and AHA’s partnership isn’t just an empty PR stunt, Bash said that they were launching deliveries in another metropolitan city really soon which they can’t unveil yet. “But what I can tell you, is that this time, we’ll be flying in between skyscrapers.”

AHA has been making about 20 drone trips a day now for more than three weeks and is determined to keep perfecting their system along with Flytrex. So maybe it’s time we cynics admit we can be wrong from time to time, and embrace a future of drone delivered goods — because it might actually be taking off.