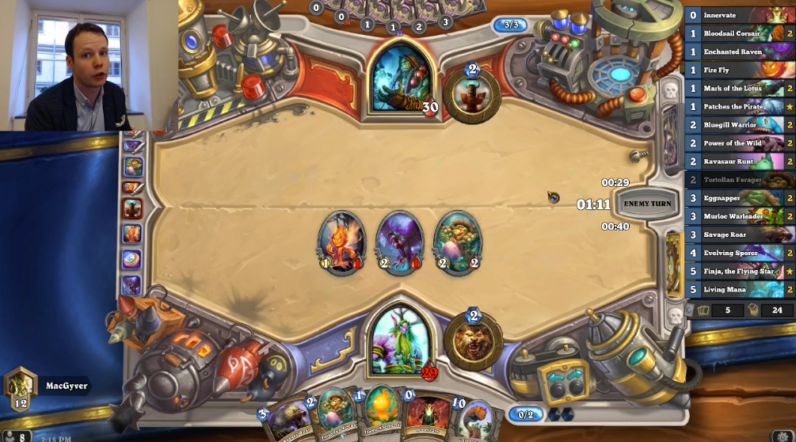 I’ve written a few articles here on TNW about the importance of legislators understanding and adapting to technology, but one Swedish politician needs no encouragement from me. In his Twitter bio, Rickard Nordin describes himself as “climate and energy policy spokesman with extra interest in e-sports”, and boy does he mean it.

According to Engadget, the 34-year-old member of the Swedish national parliament has started his own channel on Twitch where he livestreams his weekly Hearthstone session. Nordin doesn’t just talk the talk as he directly engages with fans of esports through his livestreaming.

Every Tuesday at 7pm CET, Nordin broadcasts for two hours from his office in Rikdagshuset, Stockholm’s Parliament House. During the broadcast, Nordin answers questions from viewers, like what are his favorite types of Hearthstone decks, to more serious ones regarding global politics.

Nordin only started his livestreaming last March, but he’s gotten a considerable following already (3,000 plus views on his first video) and his reception has been almost completely positive. He recently even added an hour to his streaming to accommodate those of you who don’t speak Swedish (which I’m guessing is most).

Watching Nordin’s stream is honestly quite an experience. It’s a surreal melt of popular culture and serious socio-economic issues. Don’t get me wrong. I’m not saying there’s anything bad about it, I just never expected to see an MP talking about tax increases but stopping midway to contemplate what spell to use against his opponent in an online cardgame.

Although there are many parties in the Swedish parliament that are all for innovation and free markets, like Nordin’s own Center Party (Centerpartiet), he’s had a hard time convincing fellow MPs to embrace the economic benefits of esports.

Investments in esports have been increasing in the Nordic countries, but governments have yet to help the community reach it’s full potential. Nordin wants esports professionals to be able to get athlete visas, pass new tax laws for tournament winnings, integrate esports into university education, and much more.

This might change as Nordin has noticed a positive change in his colleagues view of esports ever since he started livestreaming. There’s been more talk about proposing esports motions and there’s even been a Starcraft tournament at the lower levels of government.

You can follow Nordin here and possibly witness the future of politics. Engaging younger voters is a world-wide problem, but Twitch could prove to be a perfect way to reach them.

Who knows, maybe we’d be looking at a completely different political landscape if Hillary Clinton would have started livestreaming Gal*Gun sessions on Twitch. We’ll never know.

Read next: Amazon opens Subscription store to help you manage all your monthly fees