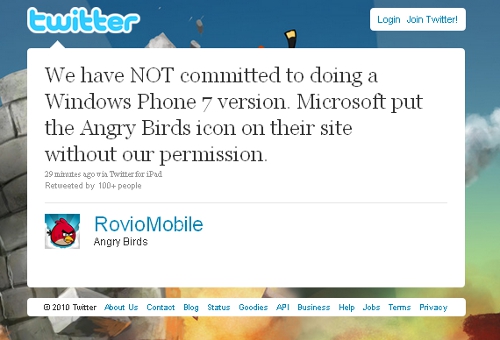 Rovio, probably the hottest company in mobile gaming right now, has no worries about Angry Birds running out of steam. Indeed it sees the franchise as having the long-term potential to match Mario or Sonic the Hedgehog. A big part of developing the game’s audience? Entering the social gaming space.

At a presentation by Finnish technology companies in Barcelona this morning, Rovio’s head of communications (calling himself “The Bird Whisperer”) said that while Angry Birds already claims 75 million downloads, it’s aiming to boost that to 100 million this spring. While he declined to announce any details of Angry Birds’ move into the social space, Rovio is aiming to add another 100 million players as a result.

While Angry Birds is heading for games consoles in the near future, it seems none of this planned growth will come from Windows Phone 7 – at least yet. Rovio has thus far held back from Microsoft’s platform and there appears to be no immediate plan to change that. Rovio apparently sees the situation as “delicate”, but if there’s demand they will look at it.

Rovio has made the trip to Mobile World Congress as part of its quest to become “The most carrier-friendly developer”, with the aim of signing more operators up to its recently announced Bad Piggybank operator billing system. As previously reported, players using Finland’s Elisa mobile phone network will be first to have the option to pay for the ‘Mighty Eagle’ cheat via their phone bill.

Read next: Visiting a bar and owning a bar are very different things