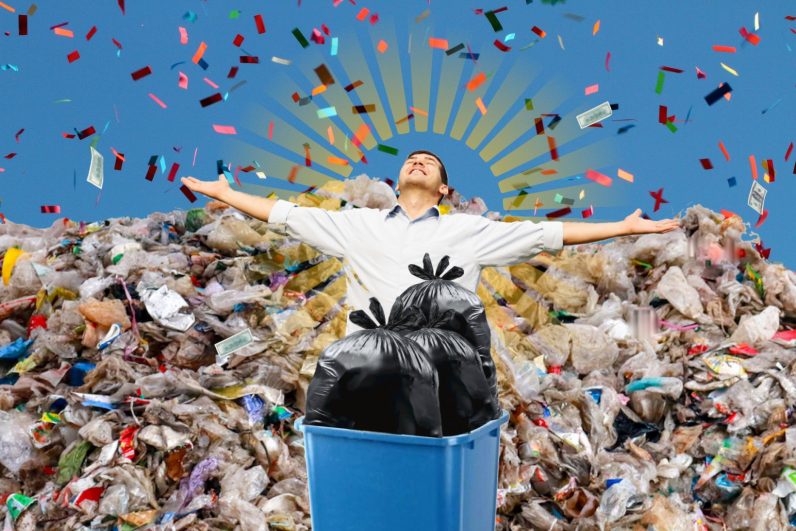 Can you remember what you were doing on New Year’s Day, 2018? Celebrating or perhaps nursing a hangover?

This, countered with China’s banning of imports of recycled products, has increased the need to look for more innovative and long term solutions to manage the world’s waste.

One company encouraging such solutions is Chivas which holds an annual competition for social entrepreneurs, the Chivas Venture competition. Right now, there are 20 finalists vying for the top prize, and the winner, who receives funding to grow their business, will be announced at the TNW Conference in May in Amsterdam.

Here are five of the 20 finalists who are turning their attention to transform waste into profits.

Hunger exists because of a lack of logistics; not for a lack of food, says San Francisco-based Copia which brings logistics and partnership working to address the issue of food waste. The startup works with communities in two ways: To help businesses track and manage their food waste and to donate edible excess food to those in need.

Now operating in 13 US cities, this year Copia will feed three million people with high-quality food that would otherwise be in the trash.

Copia has been defying the status quo since day one, says founder and CEO Komal Ahmad. “We don’t settle for the way things ‘have always been’ — we strive to break boundaries and push innovative thinking. In 2016, we partnered with Super Bowl 50 to execute the first-ever zero food waste Super Bowl. And we were invited to partner with the Academy Awards to ensure that for the first time ever, no food went to waste during Oscars weekend.”

Winning the competition would allow them to open in over 200 new locations and grow their team to help more hungry people in need.

As former bar and café workers, the Scottish Revive Eco founders saw coffee grounds being chucked in the bin on a daily basis. Wanting to do something about this waste and the UK’s annual production of 500,000 tons of coffee grounds Revive Eco are now on their way to diverting every ounce of that away from landfill.

It wasn’t an easy road. “Initially we knew very little about how we were going to go about creating a solution to this problem,” admits co-founder Scott Kennedy. “Coming from a non-technical background, we were naive enough to question everything and try to find methods to do things differently from day one.

In addition, they also extract natural chemicals from the coffee grounds which form the basis for a substitute to palm oil and thereby offer a more environmentally friendly alternative for the cosmetic and pharmaceutical industries.

“Our mantra is very much that we strive to create a profit with purpose,” says co-founder Scott Kennedy. “Social impact is engrained in everything we do, and our very business model ensures that profits and purpose go hand in hand. The more coffee grounds we collect and process, the greater revenue we generate, which then enables us to grow and process more and more material.”

Funding from Chivas would allow Revive Eo to launch their first industrial coffee ground processing plant, increase their processing capacity from 5kg of coffee grounds per hour to over 100kg per hour and produce more sustainable materials to disrupt global industries

Used tires account for over 13 million tons of global waste a year, either sitting in landfills or being illegally burned.

The Polish company Syntoil has developed an innovative method for processing tires and rubber waste into industrial products by recovering carbon black. Today, the rubber industry is the largest market for carbon, and although the recovered carbon black market is relatively new, estimated at USD 55 million in 2018, this is forecast to rise to USD 491 million by 2023.

“It was extremely difficult to develop this technology,” says CEO and co-founder Martyna Sztaba. “The past three years were dominated by a series of mistakes and attempts to repair them. In this industry, errors, iterations, and repairs are not only time-consuming but also expensive. I’m glad that we had patience and perseverance to get where we are today.”

Financial support from Chivas would allow Syntoil to increase the number of renewable substances that can be extracted from processed tires, in addition to protecting people, animals, and the environment by reducing the emission of compounds that cause respiratory diseases and climate change.

The wine industry produces 7 million tons of waste every year.

Startup Vegea, based in Italy, turns waste from wine production into a bio-textile for clothing, creating an environmentally friendly alternative to synthetic textile production which uses 100 million tons of oil a year.

Their bio-textile reduces the pollution to our rivers caused through standard methods of growing, dyeing and treating our clothes and aims to provide support to garment workers who often suffer poor health and safety conditions and a wage that is rarely enough to live on.

Founder Valentina Longobardo became inspired after the Rana Plaza tragedy in Bangladesh, where 1,134  garment workers died when a textile factory collapsed. “Reading about that truly enraged me,” she says. “It made me want to start this project and drive positive change in the fashion industry.”

With Chivas’ support, Vegea would be able to fast track their launch onto the market and support garment workers who have overcome difficult situations and involve them in the production of ethical fashion.

Xilinat, a Mexican company, is aiming to sweeten life for everyone by transforming agricultural waste into a sugar substitute. Their product looks and tastes like sugar, is safe for diabetics, low in calories and protects teeth against cavities.

Using farm waste this way produces an alternative to current practices of incineration which creates 40% of the CO2 that is generated in Mexico, exposing rural communities to toxic pollutants.

Farmers are paid fairly for their farm waste, raising their living standards and a large portion of the money is ring-fenced to pay for the education of their young children.

“With this solution, we improve the financial situation of poor farmer families by buying their waste, says founder Javier Larragoiti Kuri. “And in addition, we avoid pollution and aid to solve health issues like diabetes and obesity.”

Chivas’s support would allow Xilinat in the next 3 years to pay 4,700 USD to poor Mexican farmers, turn 80 tons of waste into sweetener and avoid 70 tons of C02 being released.

Want to support Copia, Revive Eco, Vegea, Syntoil, Xilinat or any of the other 15 social startups in the Chivas Venture? Chivas is putting an initial $100,000 of their prize fund into your hands. Vote for your favorite Chivas Venture Global Finalists here – the winner of this public vote will be announced at the Global Final, held at TNW Conference, on May 9th.