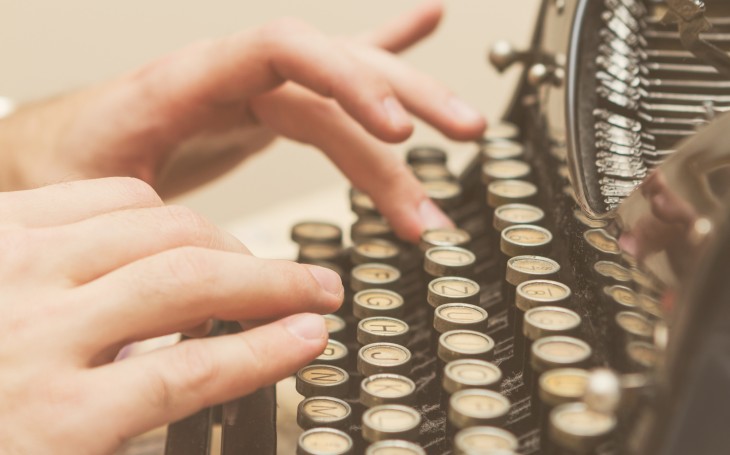 Blinking at you. Waiting for you to say something.

In the last few months, I’ve written 20 pieces that have been viewed over two million times. But every time I write, there are still moments where I want to punch myself in the face.

I feel it right now as I’m writing this sentence. My brain is trying desperately to stop me, saying things like,

I had drafted presentations, copy for websites, and email campaigns, but when it came to staring at a blank page and writing something thoughtful, I was lost.

I was afraid of the nasty parts of the writing process. The uncertainty of going from a tiny, fragile idea — maybe just a single statement that was alive in my head for two seconds — and turning that into something worth reading.

My brain fed off this uncertainty to try and stop me from writing because that’s what brains do — they avoid anything that isn’t one hundred percent certain. It’s what kept us alive for thousands of years.

To help get over my Avoidant-behaving brain, I started to develop a system to help me write better and more consistently by removing as many uncertain things in the writing process that I could.

Hopefully, there may be a few things you can take from my process that might be helpful.

1. Coming up with ideas

When I first started writing, I thought I wouldn’t have enough ideas to write about.

Interestingly, once you start writing, ideas seem to start popping in your head more often. While you’re writing you’ll think of something that could be a topic for a different post.

When you’re out with friends, taking a walk, or in the shower, ideas will start to flow. It’s as if writing loosens up your brain, allowing ways for it to connect it ways it couldn’t before.

I started to store these ideas in a single file. And what was once a blank list a few months ago, now has 112 ideas (more than I could get to in a year):

One of the best ways I’ve found ideas to write about is noting things I’m researching or curious about.

Should I have a coffee or beer if I want to get a blog post done?

I want (read: need) some salt and vinegar chips right now but I know they’re not good for me. How do I stop my craving?

If you’re thinking about something, don’t know the answer, and it seems interesting enough where you’ll probably research on Wikipedia later, this could be a topic worth writing about.

Jot it down. You can figure out later if this could be a topic your readers will be interested in.

Another way to find ideas is to pay attention to things you might be struggling with right now. Maybe it’s something you’re doing to find your first customers for your business or how you found a way to fall asleep every night within five minutes.

These stories are interesting.

Even if someone’s written about a similar experience before, you’ve approached the situation in a certain way and had your own outcome. Sharing this is valuable. It helps build a broader knowledge base around the topic, helping other people dealing with the same thing.

2. Putting words on the damn page

When I first started writing, it would take me a long time to put together a single post. Sometimes I would spend over twenty hours writing a post like this one.

After writing my first few articles, I learned something from one of my favorite writers, Paul Jarvis.

Paul’s written three books and a collection of thoughtful essays. When I asked him about his writing process he said,

First I vomit all over the page. Then I edit like crazy.

The first draft you write should not be perfect. If it is, you spent too long writing it.

When you flip back and forth between writing and editing too often, your doing your brain a disservice. You’ll stall your writing flow. This was one of the things that was causing me to take so long to write a post when I first started writing.

Get your ugly ideas out. Don’t worry about capitalization, punctuation, or spelling on the first go around. You’ll take care of that later.

Here’s an example of what my ‘writing vomit’ looked like from one of the paragraphs of the first draft of this post:

Although I would never publish this, this garbled mess serves its purpose —a placeholder for fleeting ideas.

Get your ideas on the page. You can prune them up later.

If something you wrote doesn’t feel right, don’t go back and fix it yet. Just keep swimming.

Once you get through your first draft it will be a mess. This is one of the hardest stages for me.

I might have to restructure a piece entirely or scrap major parts because they aren’t focused. For instance, I pulled out the original introduction to this piece; although some of the points in it were good, it veered away from the core topic.

Sometimes, before or during this process, I’ll read a few articles from my favorite writers to help me see different ways to structure certain things.

This part of the process can suck a lot and feel like there’s no way what you’re writing now will ever make sense but realize it’s only hard because your writing muscle is getting a hell of a workout.

If I’m struggling at this stage I’ll say something to myself like,

You will get through this. Just keep going.

The more you write, the stronger your writing muscle gets. You’ll get used to feeling uncomfortable and the pain at this stage will gradually start to fade.

At this stage, my writing is full of run-on sentences, pointless words, and parts where things still don’t flow right.

I’ll read a piece from beginning to end, noting the places that made me pause. Any pauses you notice are a sign that something is off.

If a paragraph seems redundant, I’ll remove it. I’ll then re-read that section and if it works without the paragraph, that paragraph is out.

Keep your writing simple. It will help make your points stickier.

I use this same process for sentences and even words. I’ll see how i could restructure sentences to have fewer words or interchange words for shorter ones. Here’s an original sentence from this piece,

Here is where I begin to remove unnecessary words and look to improve the rhythm of the piece.

Be ruthless. Cut words that don’t deserve to be there.

The post is almost there. I fully turn on my analytical brain for this part of the process, double-checking every fact, every ‘they’re, their, there’, and every image.

When considering an image for a piece, I look for two things:

1. The image must add value to the piece. For instance, if I’m writing about the details of a scientific study, I’ll add an image to help summarize or support the main takeaway from the study. I won’t add an image simply for the sake of adding an image.

2. The image must be simple enough to understand at a glance. If your readers have to pause too long to understand an image, you’ve broken their rhythm.

Here’s an example of a simple image I created for a blog post versus a complex one I decided not to use:

I’ll keep an image only if it adds value to the piece and is simple to understand in a quick look.

6. Have someone read your stuff

When you’ve been so involved in a piece, you’re likely missing a few things that only someone else could pick out.

I’ll usually send a draft out to one of my co-founders or a few trusted friends. This process helps me identify things that could be improved that I likely never would have found.

Another thing I’ll do is bring up the topic of my post during a conversation with my fiancé but I won’t tell her I’ve written a piece on it.

I’ll say a few of the main points from the essay and see how she reacts. If she says something like, “Really?! That’s so cool. So why does that happen?” I know that’s usually a good sign.

If she looks confused or disinterested, that means I have more work to do.

After writing a post, I’ll usually leave it alone for at least a day or two before looking at it again.

Scientifically, this is called the incubation period, an important part of your brain’s creative process. When I take a break and return to a piece later, I have a fresh set of eyes and new neural connections to draw from.

You may find things that could be improved that you missed before — it could be an awkward sentence, a misspelling, or an image that still doesn’t look right.

If you feel it, your reader will feel it.

Fix these before hitting publish.

You could go on editing forever but once I make these last fixes, I force myself to hit publish.

It can be hard to put your writing live because you want to make sure you’ve done everything you can to make the piece enjoyable. Your brain will creep in again, saying things like,

Now is the time to hit publish and remember this quote from best-selling author, James Altucher,

Sure you might see a few things that need fixing but it’s better to publish and make a few fixes when the post is live than to sit in draft mode, editing over and over.

Hitting publish forces you to get on with it.

Writing is hard. It’s a process that involves many highs and lows but most writers are fighting against the same forces that you are. As the great Ernest Hemingway said,

I write one page of masterpiece to ninety-one pages of shit.

Not every word you write will be published. And that’s okay. Wading through the bad words is sometimes the only way to find the good ones.

And there isn’t one best way to write. Ernest Hemingway wrote standingwhile author Mark Twain was known to write laying in bed. Your routine doesn’t have to be the same as everyone else’s.

Start small. Some writers aim for 1,000 words a day. I used to stick to one post a week but I felt like I was always behind and it didn’t make writing feel good. Now I just try to write something every day.

Be consistent. Whether it’s one post a week or a month, experiment with what you can sustain.

Your words are some of the most powerful tools you own. Don’t let them go to waste.

Read next: TripAdvisor plans mobile travel guide features in the face of competition from rivals like Foursquare and Google Now