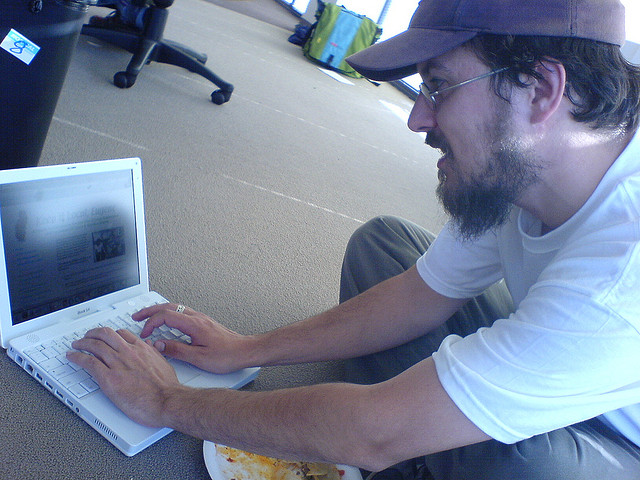 ReadWriteWeb‘s lead writer of four years, Marshall Kirpatrick, annnounced today that he is stepping back from the day-to-day job of covering of startups, to begin the journey of starting his own.

Kirkpatrick had this to say on his blog about the new venture, called Plexus Engine:

It’s with both excitement and sadness that today I announce I am stepping back from my full-time position at ReadWriteWeb to build a product and a company. I’ll be continuing to post at RWW regularly, but I’ve got some big new things up my sleeve as well.

After years of writing about startup companies, I’m now building one myself. Specifically, I’m building a company that’s developing a technology based on some of my favorite consulting projects I’ve done for clients over the years: an app and data platform that discovers emerging topical information. It’s a learning-curve busting, “first mover’s advantage” as a service, technology for information workers who want to win. It’s about helping users “skate to where the puck is going to be, not to where it’s been.”

Plexus Engine is currently in private beta, and we hope to take a look at what he has in store for us very soon.

Kirkpatrick explained the name he chose for the new company:

A Plexus is a place where nerves branch and rejoin in the body and the Plexus Engine analyzes points of intersection online to detect emerging signals.

Kirkpatrick has a long history as a respected technology journalist, dating back to his days of writing for TechCrunch.

His thirst for knowledge pulled from aggregated data can be seen in his work, and it sounds like Plexus Engine will further that thirst, and be the basis for his new company.

While Kirkpatrick isn’t talking about what Plexus Engine is exactly, he teased it with this background story:

I’ve built my career as one of the web’s leading technology journalists by making strategic use of lightweight tools for processing data to gain first mover’s advantage.

I’ve also consulted for companies large and small on how to build and use new media technologies, launch products and identify potential hires and industry experts, using tools as well. That’s where Plexus Engine was born.

Now I’m building a technology for everyone to use in order to save time and derive value from the huge sea of data being published online.

I spoke to Marshall today about his experiences in tech journalism, and what’s coming next:

TNW: What was the single most important thing you’ve learned being a tech journalist?

Marshall Kirkpatrick: That’s a really hard question Drew! Lemme think about it some more. That there’s a lot of good news in the world, that despite the state of the offline world, the online world is filled with opportunity, innovation, hopefulness and excitement. It may not be evenly distributed yet, it’s disproportionately available still to the most privileged people in society and to early adopters, but hopefully that’s changing.

TNW: Are there things tech companies can do better to get their products seen that they’re simply not doing?

TNW: What excites you the most about being hands on with your own project?

Marshall Kirkpatrick: I’m excited to be learning what it takes to build a company and a technology and the Plexus deliverables are awesome!

We wish Marshall the best of luck in his new venture, and look forward to reviewing the company here on The Next Web.