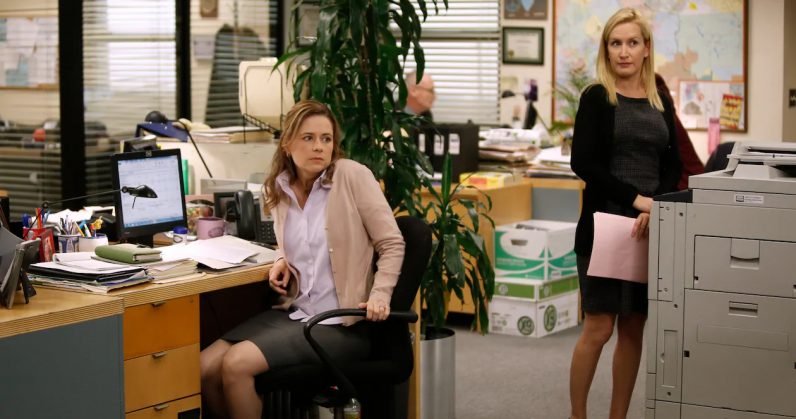 I’m currently on my 25th or so re-watch of NBC’s hit mockumentary series, The Office, and it’s not because I didn’t get all the jokes the first 24 times. The show is pure comedy gold, thanks in no small part to its phenomenal cast.

Now, six years since the show’s season nine finale, actors Jenna Fischer and Angela Kinsey, who played the roles of Pam Beesly and Angela Martin respectively, are teaming up on a podcast about the series called Office Ladies – and I can’t wait.

My bff @angelakinsey and I are excited to be teaming up with @earwolf to bring you our new podcast Office Ladies! Each week we will watch an episode of The Office and tell you all the behind-the-scenes scoop and trivia…the kind of stuff that only two people who were there can know. There might be some tangents about our lives, our friendship, our cats and our Target runs. We will also answer your questions!! It starts Wednesday October 16th so get ready to watch The Office with us!! We can’t wait! #theoffice #officeladies #bffs (“Office Ladies" will be available on Stitcher, Apple Podcasts, Spotify and anywhere you can download podcasts.) LINK IN BIO!

The duo will re-watch episodes of the show and share trivia, stories from behind the scenes, and other anecdotes from their lives on set, as well as from their years-long friendship that’s outlasted the series.

It’ll be published by Earwolf, A Stitcher-owned podcast network that’s also produced big-name shows like Conan O’Brien Needs a Friend, Getting Curious with Jonathan Van Ness, and How Did This Get Made?

Office Ladies will launch on October 16, with one episode a week – which, as TechCrunch noted, doesn’t give Fischer and Kinsey enough time to go through all 188 episodes before the TV series leaves Netflix in 2021. Oh well, I’m fine with them skipping the final season anyway.

Read next: PSA: You can now cover your iPhone with a monthly AppleCare+ plan forever