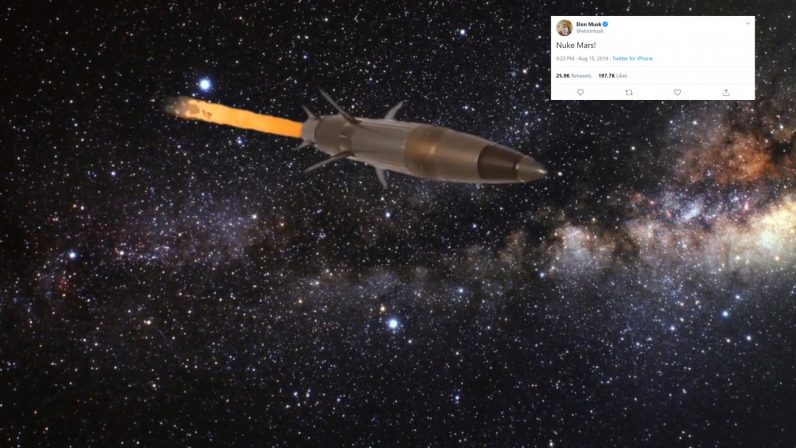 Elon Musk – aka Lex Luthor in spirit — is on social media yapping about nuking Mars again. He’s not trolling; he’s not acting as a provocateur; he really wants to bombard the surface of our planetary neighbor with actual nuclear weapons.

Here’s why: he thinks it’ll kick-start the planet and make it habitable by releasing trapped carbon dioxide into the atmosphere. He’s been pushing this theory since at least 2015 when he told Stephen Colbert that Mars was a “fixer-upper” and that we could fix it by nuking it. According to scientists, he’s mostly wrong.

NASA research indicates that dropping nuclear weapons on Mars will release some carbon dioxide, but not enough to alter conditions so they’re remotely close to what we have on Earth. A 2018 study indicates that there simply isn’t enough carbon dioxide on the planet to make that big a difference. Currently, Mars‘ has an atmospheric carbon dioxide content of about 0.6 percent of the Earth‘s. If we let Elon Musk fire off nukes at it, scientists believe that’ll raise it to a mere 7 percent of the Earth‘s content.

But that’s not stopping the controversial billionaire engineer from riling up his 28 million Twitter fans with tweets talking about nuking the red planet and selling t-shirts:

It’s unclear where Musk’s getting his information from – he could be speculating or riffing off of related research – but we’ve been able to find nothing peer-reviewed to indicate that terraforming Mars is possible in any way using current technology.

The idea that humans will inhabit the red planet beyond outposts and expeditions anytime in the near future is laughable. But it’s possible Musk is a fan of science fiction writer Kim Stanley Robinson, who wrote about using nukes to terraform Mars in his trilogy about the planet. Robinson no longer believes it’s possible though, so even if it’s based in fiction, Musk‘s still out on a limb here.

A significant number of serious scientists believe it will take hundreds or thousands of years to colonize Mars. Others believe it will never happen. But one thing’s certain: Mars‘ problems can’t be solved with nuclear weapons any more than Earth‘s.

Read next: Satoshi Nakaboto: ‘A day of consolidation in Bitcoin’