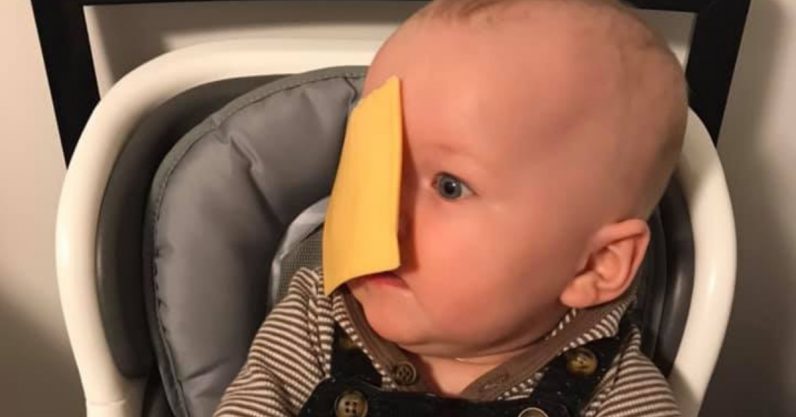 Very often on the internet, you see videos where you want to laugh, but know you shouldn’t. Or you suddenly do laugh, and then feel immediately guilty afterward.

I saw a video a few days ago (tweeted by @unclehxlmes) of a guy throwing cheese on a baby’s head along with “just cheesed my lil brother.” But it turns out the video was originally posted on one Charles Amara’s Facebook, where @unclehxlmes found it.

You asked for it, here it is! Attack of the cheese Episode 2. He wasn’t happy after this one…

Eight million views later, @unclehxlmes admitted his fraud in a tweet, apologized to the family, and took down his tweet.

just to let you all know, that cheese tweet isnt my lil brother and ive deleted it🤧 didnt expect it to get THAT viral lmaoooo

explanation to why i deleted it, if u wanna ask anything just dm me pic.twitter.com/FXl2INd1Hn

But it was too late — the video had already been turned into a viral cheese slapping challenge. By now, thousands of babies’ faces have been flapped with cheese slices.

It gets better every time I watch it pic.twitter.com/QPRN42x8Xo

Some were calmed by the slice:

Most looked apathetic, and a bit confused:

The challenge even spread to adults:

Can we talk about how my dog was more excited about the #cheesechallenge then my dad was😂 pic.twitter.com/mLBJbDO8am

And the definition of “cheese” loosened:

Technically this was cheese (I still ate the pizza)#cheesechallenge pic.twitter.com/pS9pREpcJq

I’m not really sure what to think. I laughed, yes. But I love kids, and I love cheese,  and I hate to see either wasted. While the satisfying “fwap” sound of a moist Kraft single landing on a perfectly bulbous baby scalp is satisfying, it’s also kind of sad. Babies look to us for protection, and, yes, dairy, but not on their face.

Chrissy Teigen sums it up perfectly, as she often does:

I love a prank as much as anybody but I cannot get myself to throw cheese at my adorable, unsuspecting baby who has all the hope and trust in the world in me

Think of the children, people of Twitter. THINK OF THE CHILDREN.

(And, this is definitely not an endorsement, but if you wanted to see more of these videos for research purposes and definitely not entertainment, search #cheesechallenge on Twitter.)

Read next: Analog synths are the perfect instrument for people who took all their toys apart