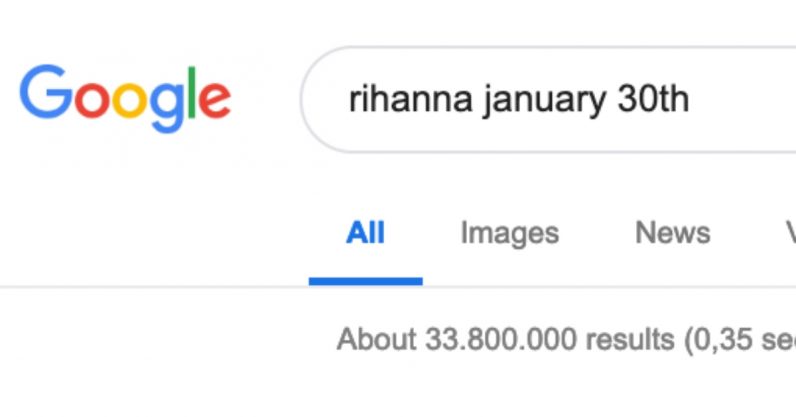 Go to Google.com, type in “Rihanna (your DOB),” you’ll get… a picture of Rihanna taken on the anniversary of your birth.

To Rihanna fans (me), seeing her in a fabulous and perfect outfit IS magic — because it’s on my personal birthaversary, it makes me feel like the outfit was styled just for me, and Riri is on her way to celebrate my birthday party because she’s my best friend.

Here’s mine by the way:

I spent at least five minutes thinking about what this outfit says about my unique personality and our unique bond.

Not everyone will be into this, and might find this headline to be clickbait-y and misleading — they might not see the magic in it yet. But it’s still a great meme, and I’m going to talk about it anyway.

This whole challenge started trending on Twitter after @ChipdNudePolish tweeted the following:

Google Rihanna and your birthday to see which outfit you get pic.twitter.com/wd691IEdFr

People replied, sharing their own results, and soon the challenge spread to other celebrities, such as Shia Labeouf, under the imaginative hashtag #ShiasOutfitChallenge:

The popularity of this meme shouldn’t come as a surprise — the whole thing is very astrological, like an R&B Rorschach Test. It taps into the viral success of horoscope social media accounts; just take a look at Instagram accounts from the likes of Chani Nicholas, @notallgeminis, or @jakesastrology, which each has between 150-400k followers.

There are even parody accounts, such as @trashbag_astrology, which combines horoscope memes with a “low brow” (read: incredible) aesthetic:

As written by Dazed, astrological memes are perfectly designed for us self-centered and flailing millennials: “At some point, two of our generation’s main coping mechanisms collided to create the most neurotic and narcissistic lovechild of all time; astrology memes.” They give us “the heads up on all the shitty things that you can blame on the pure fact that you were born during a particular time of the year.”

It seems to be that horoscopes help us cope with how fucking shit the world is. If I’m having a crap day, I can blame it on the Mercury Rising or Saturn barfing or something.

And while “self-care” has taken on a whole new meaning from its original anarchistic one into yet another vehicle by which to sell us candles, bath salts, and other shit, it’s undeniable it plays a benign role in the popularity of astrology memes. In an interview with Inside, Viktor Winetrout, the creator of the parody astrological Twitter account @Sorrowscopes, said horoscopes are a “harmless escape from the never-ending news cycle.”

The Rihanna meme, as Teen Vogue reported, “is a startlingly accurate representation of mood, personality, and overall life.” Memes are just super speedy vehicles for ideas, and when put into this context, it’s no surprise Riri’s outfits bring us comfort in this cold cold world.

While googling Rihanna and my date of birth is a comforting meme raft in the stormy shit sea that is the internet, I’m not sure if it solved all of my stresses and worries — but it was a welcome reprieve during a busy day.

And while not everyone may share the same belief in or enthusiasm for astrology and horoscopes, it’s undeniably fun — and the fact that it’s Riri made it all the better.

Read next: Huawei Mate 20 Pro: A long-term review of 2018's most ambitious phone