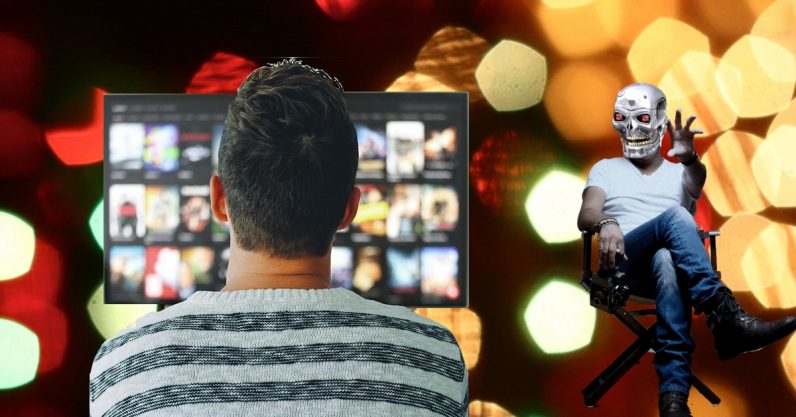 It’s that time of year again.

What always amazes me is how much tacky crap people will tolerate for the holidays. Creepy music, vulgar light decorations, gross food… the list goes on.

Don’t get me wrong, there’s a lot of great stuff too. Take holiday movies for example, there are some absolute classics. But there’s also a lot of really really terrible films which for some reason we lower our standards for.

Maybe it’s the spiked eggnog, or maybe it’s capitalist manipulation disguised as “coziness,” but Netflix has managed to exploit our weakness for holiday crap yet again with their latest film releases. The Holiday Calendar, The Princess Switch, The Christmas Chronicles, and The Christmas Prince: The Royal Wedding — each one as mind-numbing as their generic titles imply.

Netflix knows exactly what they’re doing — the streaming platform famously “reverse-engineered Hollywood” in that they use predictive algorithms to create tens of thousands of micro genres to better understand how people find movies they want to watch. Once they monopolized film and tv streaming, they then used this data to engineer movies and tv shows that were perfectly made to make us want to watch them — great shows like House of Cards were sculpted out of big data.

Netflix knows we eat shit for Christmas, so they’ve served it to us on a platter.

But how much of a hand does big data have in creating these movies? The concept, plenty, but what about the plot and the dialogue?

I decided to watch every single one, and rank them based on how likely they were completely AI-generated. Our highly subjective metrics for ranking include stiffness of dialogue, predictability of plot, and how many other movies they ripped off. I also comment on general criticism of shittiness that has nothing to do with robots.

Also, this article has spoilers. Get over it.

First up: The Holiday Calendar

Here’s a rundown of the plot — struggling photographer Abby dreams about opening a studio, and her family doubts her abilities. Her best friend Josh comes home from traveling around and photographing the world, and clearly loves her. Her grandpa gives her an old European wooden advent calendar her grandmother used to own, and it turns out the thing is magic. Every day it gives her a toy which predicts an event that’s going to happen that day. Eventually the events cause her to fall in love with her best friend and he buys her a studio and everything is perfect and wonderful.

My ultimate takeaway? Painfully sappy, and offensively boring. Vox referred to it as “aggressively bland” and I couldn’t agree more.

As far as the dialogue goes, it included some truly agonizing gems, the worst of which were between Abby and Josh, such as when Josh asks Abby if her work feeds her soul, or Abby saying “I want to be fearless enough to go after my dreams, like you.” Blaming a robot for this dialogue is an insult to technology.

In terms of predictability of plot, you pretty much know how it’s gonna go as soon as the advent calendar starts acting autonomously.

Did it rip off any other movie plots? Why, of course it did! This movie fit neatly into the template of best friends falling in love with one another, so it’s a bit of Clueless, 13 Going on 30, Made of Honor, etc, except way way worse.

The Holiday Calendar is worse because this movie also has the classic plot cliche where the main character is an insecure hermit who needs a man to push her to chase her dreams. Basically, women are shit until men tell them otherwise.

Unfortunately this is something that nearly all the other Netflix holiday movies also share, and you deserve better for Christmas.

Finally, the whole magic bit is unrealistic — if I had an advent calendar with a mind of its own I’d throw the thing out and call an exorcist. On that note, I kind of wish the whole thing turned into a horror film where the advent calendar is luring everyone to their death. But that might be too out of left field for machine learning to pick up on.

Next: The Christmas Chronicles

The plot centers around a sister and car-stealing brother who are borderline abusive to each other, likely due to the emotional trauma of their father’s death. On Christmas Eve, their mom has to work, and after hearing Santa they decide to sneak into his sleigh to follow him. The sleigh crashes halfway across the country, and the children now have to help Santa find all the presents which have fallen out. A whole lot of other stuff happens, and ultimately it ends with the older brother believing in Santa and talking to his dead dad in a Christmas ornament reflection.

This one was the sole children’s movie of the bunch, and it was possibly the least fun kids movie I’ve ever seen in my life. It’s completely joyless.

Santa is also an asshole. Played by Kurt Russell, Santa is rude and gruff and not at all the comforting old man like he’s typically depicted. He also gets weirdly political, like when he says that him saying “Ho, ho, ho” is “fake news.”

Now, douchey Santas can be done well — consider The Santa Clause with Tim Allen — but this one brings nothing new to the table. Also, apparently this movie is a symbolic shift in Kris Kringle aesthetic — we’re now in the era of the “hot santa,” and my childhood is ruined.

The brother is just mean, and the sister is weirdly precocious. Precocious children creep me out.

This movie definitely ripped off The Santa Clause, but also The Polar Express, two classics.

The only positive I’ll begrudgingly give it is that when the kids were flying through space on Santa’s sleigh, the visuals were kinda cool.

Besides for that, I’m not being hyperbolic when I say finding out that this movie was produced by the same man behind Mrs. Doubtfire was one of the most disappointing moments of 2018.

A fun way to watch these movies is to see how fast you can predict the entire plot — this one took me about three minutes.

Here are the CliffsNotes: Vanessa Hudgens of High School Musical fame plays Stacy, a talented but insecure baker (!!!) who is invited to Belgravia to enter into a prestigious baking competition. She doesn’t want to go because Christmas time makes her sad about her ex boyfriend. She runs into him and his new girlfriend on the street, as well as a little old man who tells her Christmas wishes can come true, and decides to go. She goes to Belgravia with her best friend (!!!) Kevin and his precocious daughter, (!!!) Olivia.

The prince of Belgravia is betrothed to a woman named Lady Margaret Delacourt who, get this, has the exact same face as Stacy. Marge wants to “get to know the people” of Belgravia, so she asks Stacy to switch places with her. Long story short, Marge falls in love with Kevin, Stacy falls in love with the prince, and they end up deciding to stay switched forever.

The tagline is “Life is what happens when you’re making other plans.” It doesn’t have much to do with the plot.

Besides for its obvious similarities to The Holiday Calendar, The Princess Switch rips off more plot points than I can count — The Prince & the Pauper, The Parent Trap, Cinderella, The Princess Diaries, and The Lizzie McGuire Movie were just a few films disrespected.

This was probably my least favorite of the bunch.

Second of all, another precocious child. Never trust a child with a better vocabulary than yours.

Third of all, the men are terrible in this film. Kevin keeps referring to Stacy as “too intense” whenever she tries to do anything intelligent, and the prince has a weird fetish for women who “have an opinion” like his grandmother. FYI, most women have opinions. But I digress.

Fourth, the prophesying old man, who I guess is Santa or some kind of Christmas spirit, pops up too infrequently for us to get used to him as a character, so whenever he does it’s a bit jarring.

Fifth, far too little time is spent trying to figure out how two distant relatives have exactly the same face, which I’m pretty sure is a scientific impossibility.

Sixth, Netflix keeps dropping in these creepy subliminal ads for their other movies:

This movie was definitely written by a robot, and we’re not the only ones who think so.

I’m not gonna lie to you, I tried to watch all of these in a day, so by the time I got to this movie I was so completely brain dead that I barely remember what happened. I also didn’t see the original A Christmas Prince movie, leaving quite a few plot holes I don’t care to fill.

Here’s what I think the plot is: Woman is engaged to a prince, and she’s struggling to reconcile her free spirit nature with royal expectations. There’s another precocious child who speaks like a 40-year-old, but I forget how she’s related to the main character. There’s also a villain, who tried to steal the crown in the original movie.

Oh! And there’s a union problem in the kingdom, which the royals are trying to solve. The main character tries to help but is told to stay in her lane while the king fixes it.

A royal family fixing a country’s financial crisis instead of making it worse is definitely the most unbelievable part of the script.

Everything else has been ripped from the plot of The Princess Diaries and What a Girl Wants.

Also, why are all these movies so weird about Europe? What all the movies had which I found odd were generic, and probably AI-generated, names for European countries — Belgravia in The Princess Switch, Aldovia in this one. Even The Holiday Calendar alluded the advent calendar’s origins were somewhere in a fantastical European city.

They used real names for American cities including New York and Chicago, so I don’t really get the refusal to admit Europe is a real place. Also every European person had a British accent, but American movies do this all the time.

I don’t even think I finished this one, so I can’t tell you how it ends.

The results are in. Netflix’s most likely to be written by a robot movie of 2018 is… all of them!

Watch them if you must, but all of these movies were definitely AI-generated as they’re all complete rip-offs of each other. I’d bet my annual $30 holiday gift from grandma on it.

Our advice? Skip these this holiday season and watch Die Hard instead.