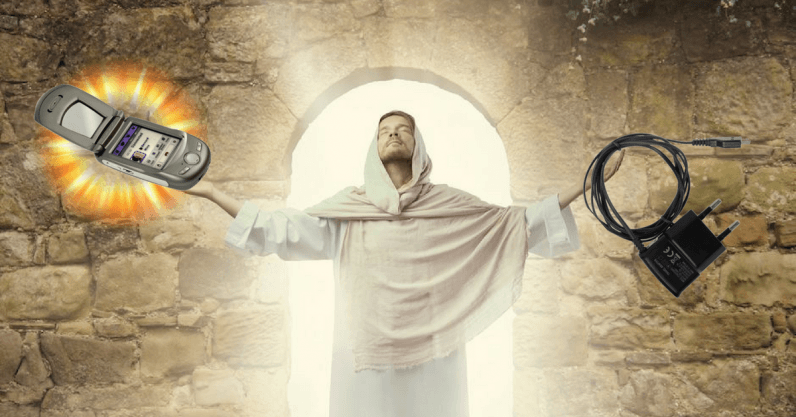 Let me set the scene for you. It’s 2010, my family and I have one shared PC that takes thirty minutes to load the login page, the internet makes a weird sound when it’s switched on, all four of us in the house have a flip phone — and we share one phone charger…

My parents were ahead of the curve when it came to digital paranoia and found a ‘fun’ solution to raising kids in a new and terrifying digital world — control their access to electricity. I’m not hanging about parenting platforms, but I can easily imagine some vapid advice article that would happily promote my parents’ ‘family charger’ idea. But I’m here to tell you it’s a bad idea.

I had timed restrictions on MSN messenger, my PlayStation 1, and even phone-charging time — it was tough. But since most teens are spending an average of nine hours on their smartphone a day, I don’t blame my parents for the precautionary restrictions — but I didn’t support them either.

If you want your kids to hate you, make them share a phone charger

My parents aren’t old-fashioned, overly-strict, or strangely religious. They were just simply concerned when it came to phone-usage. Even now when I go home at 21, I’m very conscious of when I use my phone and god forbid, I will never leave my phone on charge overnight because what if it blows the whole house up like my mum always said it would.

The sacred phone charger would live in the same spot in the living room and we’d all take our turns to charge-up. I didn’t mind this rule so much when I was prepubescent and only used our computer for Microsoft Paint but I soon turned into a terrible teen (at least, that’s what my mum would say).

Growing up under the “one phone charger” policy was not worth the arguments me and my brother had daily. I’d always get up earlier than everyone else to charge my phone. The trusty flip phone would stay alive for most of the day (unlike today’s smartphones) and it wouldn’t be until late afternoon that it would finally die — and this was when the arguments began.

I would try to sneak the phone charger upstairs, I would blackmail my brother into allowing me to take his phone charging slot, and I’d even pay him, sometimes up to five pounds, to use his charging time.

My parents weren’t oblivious, they saw the war that would unfold everyday at approximately 3:00pm in our house. But they let it happen, maybe they enjoyed watching the drama?

This went on for a while — the physical fights, the passive aggressive silent treatments, and the threats of taking my phone away. Until I just stopped caring, but mainly when my teenage hormones stabilized.

I started to notice that my friend’s lives were centered around technology. When I was younger I might’ve been jealous, but truthfully I didn’t really understand it. I never felt like I needed to bring my phone everywhere, and luckily, I still feel that way.

The roots of my upbringing still exist, however it’s made for a nice balance. What my parents forced upon me has stuck, and I do thank them for that. My phone stays in my living room (alongside the charger) when I sleep and it never makes an appearance during social events.

As much as I hate to admit that this rule has had a positive impact on my relationship with my phone and I’m probably a better and healthier person for it. However, I’m not ready to betray the frustrated teenage girl I used to be.

Even though I bring my phone charger everywhere I go since I can’t trust my iPhone to stay alive for more than two hours, I will never lend you it.

But you should blame my parents for that — or I’m just an asshole.

Read next: Huawei will reveal the Mate 20 on October 16