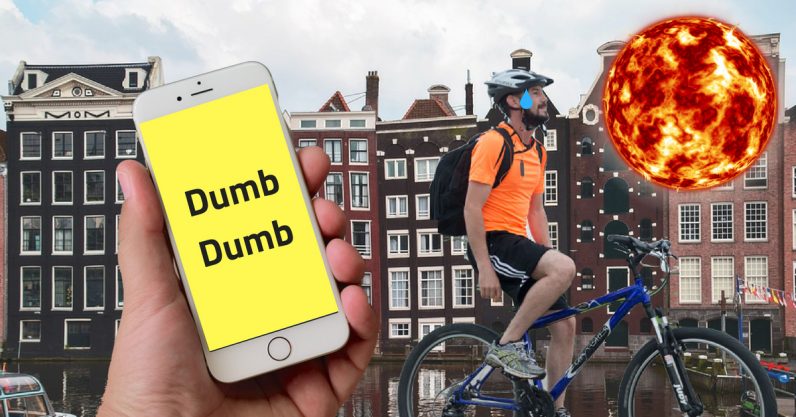 It’s so hot that every time I stand up from sitting down, I leave another puddle, exposing my perpetual swamp ass to the world. I’ve taken four cold showers today, yet I still stink. Every time I accidentally come into contact with other human flesh, I instantly recoil in disgust. The boiling temperature is turning me into a kind of moist vampire.

Pretty much all of Europe is sweating its balls off right now.

At the time of writing this, the top trending search results in the App Store are almost all people looking for a thermometer.

But here’s the thing — the iPhone has no thermometer. There is no such thing as a thermometer app. Software cannot alter your iPhone’s hardware into suddenly having temperature sensing abilities. That makes no sense.

And before you pull up a bunch of “thermometer” apps to prove me wrong, those just pull local weather data according to your geolocation.

Searching for a temperature app in the app store is dumb.

This exposes how we rely on our smartphones to be the one stop shop for all of our human needs. We assume these magical little rectangles can fix all of our problems. It shows how much we don’t understand the technology we spend so much time staring at, and that we trust it blindly to take care of everything for us.

At the risk of sounding hyperbolic, this trending search for a thermometer app led us into a much broader argument about humanity: Are people actually dumb? Or is the world just hard?

Are people dumb? Or is the world just hard?

This was the title of an interview with behavioral economist and Nobel Laureate Richard Thaler on the podcast Freakonomics.

Thaler is known as the founding father of behavioral economics, and has written book such as Misbehaving: The Making of Behavioral Economics and Nudge: Improving Decisions About Health, Wealth, and Happiness. His work revolves around building economic models that take into consideration how humans actually think, decide, and act.

In this interview, Thaler is asked if his work is “really just another way to suggest that individuals can’t be trusted to make good decisions” and therefore “a kind of new, softer form of statism” in that institutions should take control of those decisions.

In response to this, Thaler explains: “…we don’t think people are dumb. We think the world is hard.”

Correct. The world is undeniably hard right now. There is a worldwide immigration crisis, incredibly depressing global inequality, rampant racism, sexism, homophobia, and xenophobia. The planet is melting, mistrust of the media is incredibly high, and there’s a Cheetoh barking orders from the White House.

Technology has increased our connection to information, but the information feels like its getting worse.

Across the rest of the world, populist and far-right groups are gaining momentum and influence. Many people claim those who voted for Brexit and Donald Trump’s presidency are dumb. They are stupid people, who maliciously stay uninformed to protect their own self-interest.

There are dumb people in the world. But the world is also hard. Many voted for Brexit out of a fear of immigration. Many voted for Trump because they are out of work and are increasingly left feeling helpless. They are not dumb just because they voted defensively, as much as it is easy and satisfying to say.

So what does this have to do with a thermometer?

I said it before: Europe is stiflingly hot right now.

When one of our colleagues shared the trending search in the team Slack channel earlier today, we laughed, high up in our ivory office tower. How dumb people are!

Yes, people are making silly searches. Not because they’re idiots, but because biking to work as sweat slowly drips down your ass crack sucks. We’re looking for shade, and finding none.

So, there you go. A trending search for a thermometer has turned into an overly simplistic metaphor for the state of the world and behavioral economic theory.

Now, if you’ll excuse me, I’m going to stick my head in my freezer.