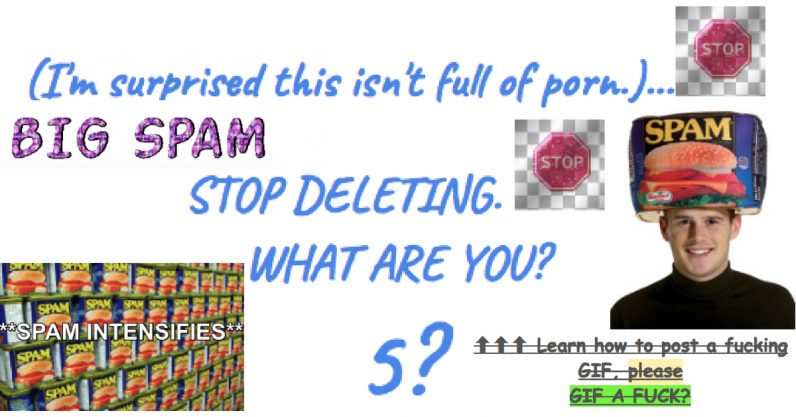 Ever heard of Godwin’s Law? It’s an old internet adage asserting that the longer an online discussion continues, the more likely Nazis or Hitler will be brought up. This idea was created by Mike Godwin, the creator of the meme, in the October 1994 issue of Wired.

It may have shifted slightly in shape — especially as in American contemporary politics, Hitler comparisons are never too far away — but it can be easily applied to online sites such as Reddit and 4chan, where if you leave anything unregulated for too long… odds are it’s going to turn into a Nazi mess. Or a porny mess. Or a Nazi porny mess. It speaks a lot to how the internet catalyzes conversations to extremes, which can turn toxic quickly.

Which brings us to Big Spam.

This week, one of our writers wrote about how he trolled a spammy person by jumping into their bad PR pitch which was unfortunately sent in a public Google doc. We turned their blockchain pitch into a truly Avante Garde and crowd-sourced art project.

We were inspired by the results and immediately began to think of other ways we could use crowdsourcing to avoid doing work.

If you’re not yet familiar, we have a daily newsletter, Big Spam, which brings you the day’s most important tech news, plus whatever puns come to our coffee-deprived, alcohol-addled minds while we’re writing it.

We decided crowdsourcing would be the perfect way to get the next day’s newsletter written with as little effort as possible.

We made a blank Google doc, set the “share” permissions so that “everyone on the public web” can edit, and we sent the link in a newsletter to tens of thousands of people. We also tweeted it to another 2 million.

Sending this blank document to a lot of weirdos made me a little nervous… but we did it anyway.

Our work was done. We sat back and watched as the document slowly began to fill up, the text morphing into a cacophony of vibrant colors and fonts, memes and GIFs.

I sat there for hours, scanning the doc for anything sexist, racist, homophobic, or any other yucky “ist” or “ic” that would require the delete button.

Shockingly, there was none. What we saw instead was a beautiful unfolding of communication. People wrote random words, promoted their bands, added onto each other’s sentences, responding to one another through comments, wished each other Happy Birthday, told each other they loved each other, used the words “please” and “thank you”… Some tried to take the project of building a newsletter seriously, before being Comic Sans-ified by someone else.

It was a show of affection I have never before witnessed, even from my own mother.

It was so wholesome we even left the document open overnight.

Sending an open Google Doc to millions of people could be considered the ultimate test of Godwin’s Law. How quickly will this go bad?

We sent it out with the best intentions — avoiding work — but, like with tweets, comments, and angry emails that fill our inboxes, we can’t really control what comes back at us. We were prepared for some heavy moderating and some even heavier editing, but we barely changed anything. It all stayed pretty tame.

Actually, it was even kind of sweet.

Maybe I’m reading too much into this. Maybe I shouldn’t take the lack of evil -isms as a virtual cuddle, and maybe Godwin’s law still holds true, but I’m damn proud of our readers for not being mean to each other.