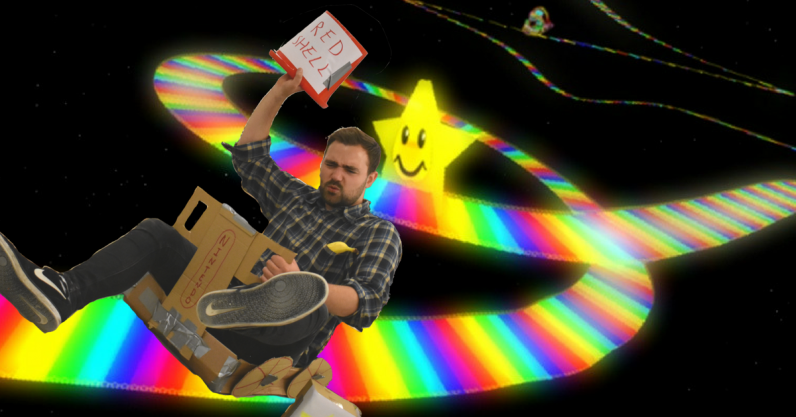 It’s just typical that Nintendo came out with an update for Mario Kart 8 Deluxe that includes Labo support. Why? Well, because the far superior Labooth Kart was set to be launched today and Nintendo has undercut the whole thing.

On a separate note, don’t ask for any proof of release date. My word should be enough.

For those not in the know, I recently entered a hotly contested trade war with Nintendo. In a nutshell, after a disagreement with the company, I decided to make my own, BETTER version of the Labo: The Labooth. Not only is it exactly three times more fun than the Nintendo Labo (prove that it’s not), it also doesn’t even need a Switch.

A Labooth Kart, you say?

You’re damn right. After creating a piano, a fishing rod, and a robot suit (all of which is shown below), the next logical step was some sort of vehicle. Obviously.

This is where the Labooth Kart came in. Luckily, I had some construction experience from last time, which meant I could put something even more impressive together:

Wow, I mean, that’s pretty cool and all, but on Mario Kart the vehicles moved and there were power-ups and stuff

God, never happy are you? Think we didn’t consider power-ups when using the Labooth Kart? Have a gander at these tasty fellas:

Yes, you’re eyes aren’t deceiving you, that’s indeed a red shell, a star, and a banana skin. And no, this is definitely not infringing on any copyrights. What, Nintendo can trademark turtles, fruit, and constellations now? Doubt it, bud.

Let’s get the Labooth Kart moving and the power-ups in play.

I need to this in my life, what can I do?

Ah, you’re aware of the Labooth logo, right? Let me give you another reminder if not.

That’s right: you should send me some money and I can send you some Labooth items.

If that doesn’t quite suit you, how about you create your own version of the Labooth (but don’t call it the Labooth because that’s my territory) and send us some pictures of it on Twitter? You too could be this happy:

Bafflingly, I’ve heard that some people would actually prefer the so-called ‘real thing.’ If that describes you, head here to get the Labo variety kit (which includes the motorbike add-on) and you can get yourself a Switch here. Fancy playing the lamestream version of Mario Kart 8 Deluxe? Grab it here.

Read next: Review: The Key2 is the best BlackBerry phone. Ever.