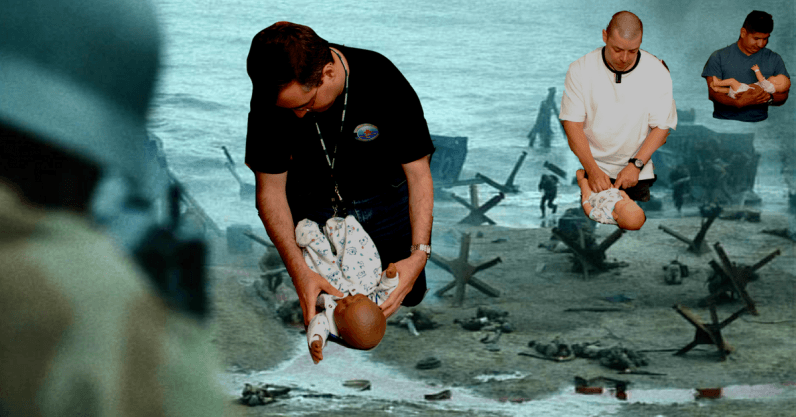 Objectively, there are only seven types of dad. This is a fact. Do not dispute it. You may think, “Hey, my dad’s unique and there’s no one else like him,” but I’m sorry to say that you’re both naive and deeply, deeply mistaken.

There are only seven types of dad and they’re all listed below. No matter your first impressions, this is a ‘good thing’.

With Father’s Day rolling round this Sunday (17th June), the fact there are only seven types of dad will make it easier to buy him a gift. Not only that, we’ve done all the hard work for you and selected the items that best suit your Da’.

So, come, sit on my lap and let me tell you the tale of the dads.

The Laddy Dad (AKA Jack-the-Dad, AKA Daddy Dyer)

If the words “your dad” and “banter” have ever been used together, this is his category. Still, it’s important to remember that, just like the lad in general, the Laddy Dad is a broad category.

It traverses the Da’ desert all the way from the father who makes uncomfortable jokes to his daughter’s prom date (“iIf you kiss her, I might have to kiss you!”) to the gammon-pink, humongous-gutted football fan chanting on the terraces about the referee being a wanker.

In other wards, a fella who desperately wants to be both a man and a dad, but goes route 101 with it. Your Pa, the Ben Affleck of dads.

So, you’ll need a gift that’ll really sums up his approach to humor. In other words, a goddamn novelty apron.

What could be more amusing than your dad wearing that, pointing at the gut and going, “If only I was so lucky, hey?” Extra points if he also implies the apron’s funny because the kitchen’s a woman’s place.

Still, if that doesn’t fly, just get him this book of dad jokes and watch him reel them out one-by-one at family gatherings for the next decade.

It’s okay though, cos he’s your dad.

The Rugged Dad (AKA Pa Mears, AKA Da’ Grylls, AKA Clint Eastdad)

There’s a subtle difference between the Lad Dad and the Rugged Dad. The former wants to be a proper man and does the things that he feels proper men should do: watching football, drinking pints, and, sometimes, being kinda sexist.

On the other hand, the Rugged Dad frankly couldn’t give a damn. He’s a squinty, wrinkled sort of pa, the type of who’ll accidentally mangle his leg with a garden tool and drive himself to the hospital, the kind that’ll neglect you emotionally for years leading to a host of unresolved issues that a team of therapists will take years to unravel. You know, that kind.

Whether he’s out in the garden, reading the latest Lee Child thriller or looking disapprovingly at your non-short-back-and-sides haircut, he’s a fella who knows what he likes.

And, you know what, he fucking loves this axe.

Don’t bother wrapping it, he won’t appreciate that one bit. Just walk up to him on Father’s Day – making eye contact the whole way – and just hand him that log-splitting, wood-killing, heavy-handled motherfucking tool. Then walk away and leave him alone – just how he wants you to.

If, for some unknown reason he doesn’t want that axe (what?) repeat the process above with his favorite four-pack of lager. He won’t love you quite as much, but it’ll give him something to do when he’s staring off into the distance thinking about the amount you disappoint him.

Geekiness is mainstream now – you only need to look at the success of super hero movies to see that.

So, when I say Geeky Dad, I don’t mean a dad who enjoys the antics of a muscly men called Chris, I’m talking about the dad who knows oh-too-well the stench of a comic book store on a Saturday afternoon. A dad who not only understands the difference between plain old magic (as in the lamestream stylings of David Blaine) and the sort of Magic you play with cards (GAAAATHERINGGGG), but has also – at one time past his adolescence – had a functioning Warhammer army. Both regular and 40k.

It’s important to note that the Geeky Dad doesn’t necessarily have to be into geek culture, as per the examples above. Instead, he has to be so over-the-top into something that within 30 seconds of him beginning to talk about it, you’re as lost as the writers of the TV show Lost were after starting the second season. Really. Fucking. Lost.

For this dad, there’s no chance you can get him anything on his chosen topic of interest without utterly, utterly letting him down. For this, we’re gonna need a selection of ideas.

The Winnie-the-Pooh Pa (AKA Big Pappa, AKA Uncle Phil)

He’s just a big jolly old fella your Pa, right? A lovable, cuddly gentleman who gives the best hugs ever.

Get that man some honey already. Watch in awe as he drinks the whole thing in one go. Marvel at his unbridled power.

This father is the sort of fella who, on a perfectly good Saturday afternoon in his perfectly good house, will tear the wiring out of the wall because he saw a light bulb flicker. The sorta dad that’ll replace every appliance in your house with ‘smart’ versions. You know, the kind that keeps QVC’s gadget section alive and kicking.

Buying a gift for this category is tough – he’s got all the gadgets – but we’ve got your back. He needs a key organizer.

Nah, don’t scoff, you know his tinkering ass is gonna love this. The KeySmart is a Swiss Army Knife style gadget (he’s already got about five of those) that lets you slam USB sticks, bottle openers, and more all other sort of ridiculous gadgets onto his keys. You can even get a Pro version with a tracking function and a torch.

Your Constant Improvement Dad doesn’t dig keys? I know something else he’s into: stationary. Get him this bluetooth-enabled pen from Cross that you can track so you never lose a pen again.

Oh… did you hear that?

I think it was the sound of your Father getting hard just thinking about the pen.

There’s a subtle difference between the Constant Improvement Dad and his crafting counterpart. The former is all about buying things, while the Craft Dad is all about making them.

Their front room is filled with paintings that make a mockery out of perspective, their gardens are filled with bits of old cars that haven’t been on the road in decades and the garage is brimming with wood shavings from the time they tried to make a coat rack, a chair, or take up whittling. There’s wood everywhere. These dads like wood.

The best thing you can do is give them something they can both create and use to drown their sorrows: a brewing kit.

Grab him a Craft-A-Brew. If you kinda love him, you can get a small kit, but, if you really want to rub it in his face quite how well you’re doing, then you need to purchase an entire fermentation system.

That doesn’t work for you? Just buy daddy a tool kit. In non-sexual way.

Hopefully, if you gift him one of the above he won’t immediately comment on how soft your city hands are. I work on a computer, Dad, and it’s not my fault moisturizer smells so wonderful.

There he is in his turtleneck, glasses balanced on the tip of his nose and with one leg crossed over the other. Look at him, sitting on a chair in front of the fire, reading a… book and making you feel like an uncultured swine.

No, Dad, I haven’t got through Kierkegaard book you got me. Opera? Not really my thing. Wait, wait, wait – why should I put on airs and graces, and stop licking the gravy off my jumper for your sake? Snob.

Whether he’s a full-blown or faux-Intellectual Dad, it’s hard to stay mad at him when all he wants is for you to stop having an opinion and to see the world exactly as he does. If that’s the case, get him this book compiling Kim Kardashian’s selfies. He’ll love every last page.

But, if you’d like to be nicer to the old fella, how about something along the lines of this fancy cheese board?

As, I know for a fact, he has some pretty strong opinions on how you should slice cheese. He does, doesn’t he, your Intellectual Dad? He knows a thing or deux (DAD LOL) about fromage. He understands Käse. Loves a bit of сыр, your Da’, doesn’t he? “You can’t cut it that way,” he says, the Intellectual Dad, “that’s not how they do it in France.”

Well, we’re not in France, Dad, WE’RE NOT IN FRANCE.

Which dad is yours?

Now you’ve seen all the available options, which dad is closest to your dear old padre? Let us know on Twitter.

Finally, don’t forget to get your lovely Father something worthy of his place in your life ahead of Sunday 17th June! We’d never forgive ourselves.