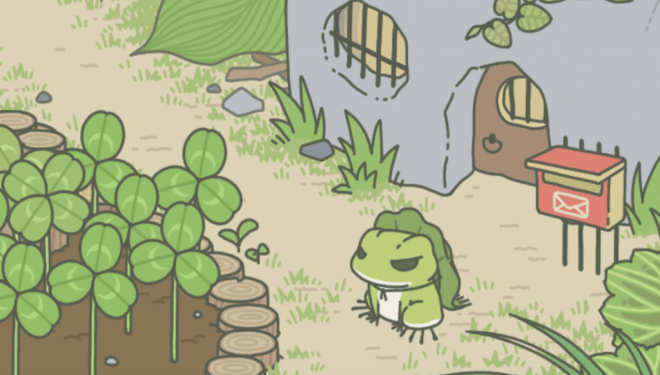 Guess what: I’ve found the most stressful game ever. It’s called 旅かえる (Tabi Kaeru or Travel Frog), and I have no idea how to play it.

In this game, I’m responsible for the life and happiness of a tiny frog. Based on Buddhist philosophical ideas about control and letting go, the frog comes and goes as it pleases. The player has no control over when it visits or how long it stays.

Apparently, everyone loves it — it was downloaded almost four million times in the first two months after its launch in December. It’s been hailed as the latest obsession of “cool kids” throughout Japan and China. There are even WeChat support groups for players awaiting the return of their frog.

People love Travel Frog. Every single one of them is a masochist.

Here’s what Travel Frog is about (I think)

The premise of the game, on the surface, seems very simple. It operates in the same way any other nurturing game does, where you collect currency to buy food, furniture, etc. to take care of a fake creature.

The player then becomes irrationally attached to and burdened by this little cyber animal. This burden is then leveraged to get you to make in-app purchases, or suffer through obnoxious pop-up ads.

Travel Frog takes place in a little stone hut — there are only two frames you can go to, inside and outside the house.

The player collects clovers from a little garden every three hours which you can use to buy little omelets and other cute stuff. You can also buy furniture and other objects I don’t know how to use. I can’t tell what anything says — but look how cute the bagels are!

Sometimes a snail shows up and says something I don’t understand. Sometimes I get a postcard with a picture of where the frog is traveling to. Sometimes there’s nothing, and I feel a deep well of loneliness in the pit of my stomach.

I don’t actually know how to play this game, and I’m sure I’m doing it wrong. What I do know is that I collect my clovers, buy food, sometimes go wild and buy furniture — but I have no idea where the frog has gone. I haven’t seen it for MONTHS.

Why I hate this game

I’m not trying to be dramatic, but this is the most stressful game ever created in the history of the universe.

Why do I despise Travel Frog?

Possibly it’s just the nature of caretaking games. I’m not great at caring for creatures. My third cactus just passed away and I have the blood of a few Tamagotchi on my hands. When it comes to my phone, I’m highly erratic — sometimes it’s glued to my hand, and sometimes I use it as a doorstop and forget it exists. A digital creature stands no chance if I’m solely responsible for its survival.

But this frog isn’t dead — it’s avoiding me.

I’m going to go out on a limb and say it’s the frog’s fault. I think it’s ungrateful. I toil away, picking clovers, and he just fucks off to god knows where. You can see the indignance all over this little curmudgeon’s face — especially in his tiny angry eyes.

That’s cute you have ~*wanderlust*~ little guy, but maybe check in every once and a while?

But what if it’s just me? What if this game is confronting me with my unwillingness to let things go? Am I not caring enough?

There are probably stages of this game I will never get to because of the cycle of sweaty stress, maternal guilt, and loneliness I go through every time I open the app.

I don’t know. All I know is I want my fucking frog back.

Read next: Not every startup has a cool origin story — and that’s okay