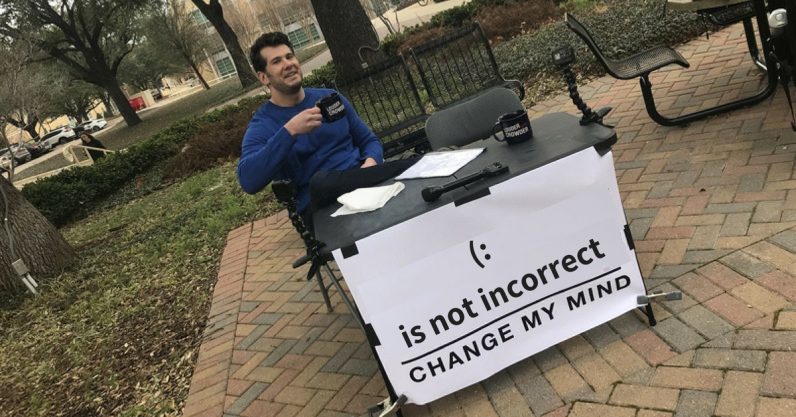 Coworkers and friends alike have told me I’ve been sending smiles wrong.

For years I thought the recipients of my smiles would be happy to receive a tiny bit of digital love from me. Apparently, this isn’t the case. Apparently, there was an emoticon class called “How to express emotion and if you don’t do it this way you’re a terrible person” everyone was invited to and I wasn’t. APPARENTLY, we all want to nitpick each other’s expressions of joy. My mistake.

You might think this is semantics, but it’s torn TNW’s editorial team apart. Now, I’m going rogue. Here’s my hot take: I don’t give a fuck that I allegedly type emoticons backward.

To prove why I’m objectively correct in this highly subjective argument, let’s take a quick look at why the emoticon was invented.

The emoticon was born on September 19th, 1982 when computer scientist Scott Fahlman discovered electronic message board conversations at Carnegie Mellon University were going off the rails. Subtext was lost as irony, humor, and intonation were being missed. :–) was thus used to alert people that a joke was being made.

And it works. You can say literally almost anything with a smile after it, and it’s fine. Look:

What are you doing later? :)

I’m right outside your window :)

I just set fire to your lawn :)

The portmanteau — emoticon = emotional icon — was born, and spread.

(Worth mentioning is the kaomoji, the emoticon’s Japanese cousin, which is similar in effect, but since it utilizes characters from the katakana alphabet, it’s not really time efficient for English typers. ¯_(ツ)_/¯ )

The emoticon was thus a way to complement the limited capabilities of our keyboards, and humanize this very mechanical way of communication. Today’s emoji are far more versatile and common, but the purpose remains the same — to make up for the physical cues that are missing in electronic communication. They make up for our lack of, well, us.

You might be thinking: who cares? But this comes up a lot. Much of our team is remote, so we communicate electronically over Slack daily. Just the other day I innocently asked my colleagues to weigh in. The backlash was swift and vicious:

But jokes on them — Slack, which automatically turns emoticons into emoji, accepts it both ways. If Slack accepts me, why can’t my colleagues?

I have done my Googles, and I can’t find a single reputable source that says I’m wrong. I did, however, find many online forums hotly debating the topic, as well as one Wikipedia article saying: “typically employing a colon and a right parenthesis to form sequences like :-), :), or (: that resemble a smiling face when viewed after rotation through 90 degrees.”

It’s a SIDEWAYS smile. My face isn’t sideways, is yours? Do you rotate your face 90 degrees, like some sort of exorcism?

I’ve heard the argument that it’s because, in English, we type from left to right. That argument doesn’t hold here. You don’t type your face from top to bottom. At least, I don’t.

Also, the original point of the fucking emoticon was to add humanity and personality to electronic conversation. I’m not arguing my way is correct — I’m arguing that I should be able to express myself in this way if I so choose.

I can adjust, but why should I? Why must I change to please you all? Why am I wrong, and why can’t you all just accept my love?

Read next: Vilifying Facebook is pointless — we need to take responsibility for our data