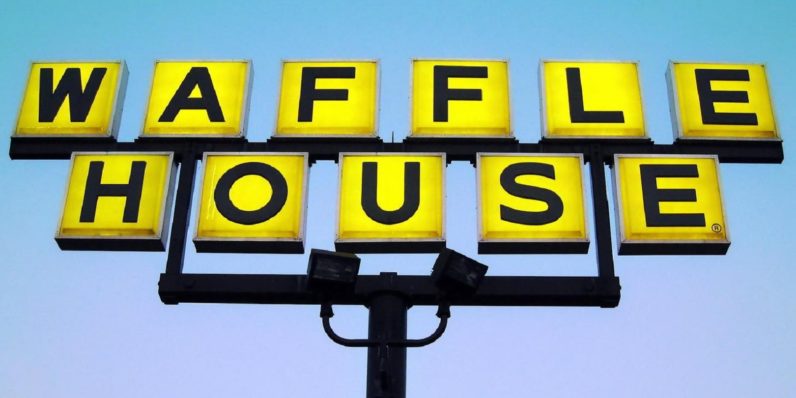 The Waffle House Index is a fine example of a low-tech solution to a real-time data analysis problem that’s been around for as long as people have. The Federal Emergency Management Agency (FEMA) has informally employed a green/yellow/red system of situational reporting from Waffle House employees in order to determine the extent to which a local community functions after an emergency.

Apparently, the Waffle House Index is a real thing. One journalist went through a lot of trouble tracking down the truth behind rumors that a US Federal agency relied on a southern purveyor of hash browns and grits in order to assess the situation in a disaster area.

Waffle House is a greasy spoon that dots the entire southern and southeastern parts of the US. The food – while delicious – is best described as hearty and comes in large American portions. Its doors never close.

If a Waffle House reports in to FEMA that it’s open and operating, that’s a green indication, so the community is bouncing back. Yellow means that it’s operating in a limited capacity without a full menu. Finally, red means the restaurant isn’t open — and presumably things are bad.

Former FEMA director Craig Fugate used its existence as an anecdote to the press several times.

Basically the Waffle House Index was his thing, and I don’t think that can be overstated enough. Fugate seemed to be the genesis, driving-force, and overall raison d’etre for its very existence.

A long series of emails were exchanged between various members of FEMA and a journalist, who incidentally was also named Craig. Several members of FEMA pointed out that the Waffle House Index was the director’s thing and they weren’t sure what to say about it.

I don’t know if Craig (the journalist) ever got to speak with Craig (the former FEMA director) but I’d like to think they met over hash browns one hazy morning. Perhaps discussing the various merits of scattering the potatos so they crisp versus keeping them clumped and tender, before parting ways for good.

Somehow, in the face of our recent disasters, it makes sense that restaurant would serve as a lighthouse for FEMA … if for no other reason than the big ass yellow “Waffle House” sign shining above every truck stop from Galveston to Charleston. Its bright glow reminds southerners of home.

Read next: Intel's Myriad X chip is a game-changer for AI