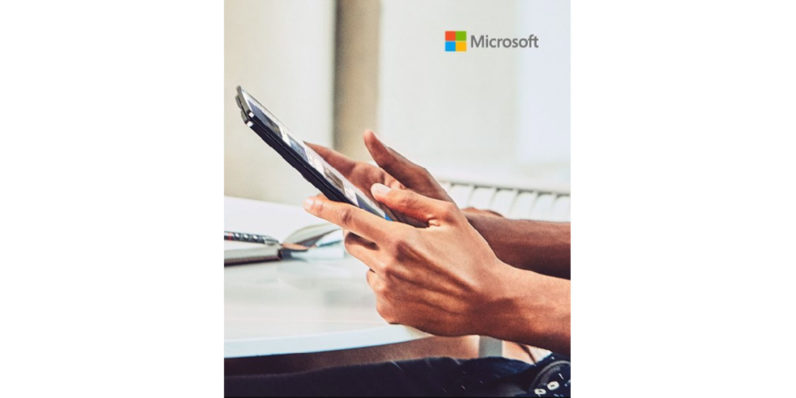 Astute observers on Twitter noticed a Microsoft tweet shows a device that doesn’t look like anything currently on the market. The tweet, which advertises a free Node.js class, shows a person holding what appears to be a large phone with a bezel-free screen that might be folded behind the device.

There’s no reason to believe that this is the Surface Phone, relax. It seems like a strange marketing move to make an innovative hardware device play second-fiddle to a free developer class on a javascript runtime.

Perhaps the people responsible grabbed an image from the wrong folder, or the photographer captured a different device at a weird angle we hadn’t seen before. Is it just a strange case or accessory?

This isn’t the first time we’ve talked about the rumored Surface Phone. We previously reported on a Microsoft patent for a folding screen, which would make sense given the Surface line’s transforming capabilities.

If this is a Surface Phone mock-up there’s almost no chance it was meant to be seen by the general public.

Was this an accident or the most underwhelming reveal ever? Does this image come from a Twitter account owned by Microsoft in another dimension where the Surface Phone has been released but the KFC Phone is mere speculation? We may never know.

We contacted Microsoft for more information, and will update this post if we hear back.

Read next: Uber is getting sued by disability advocates again