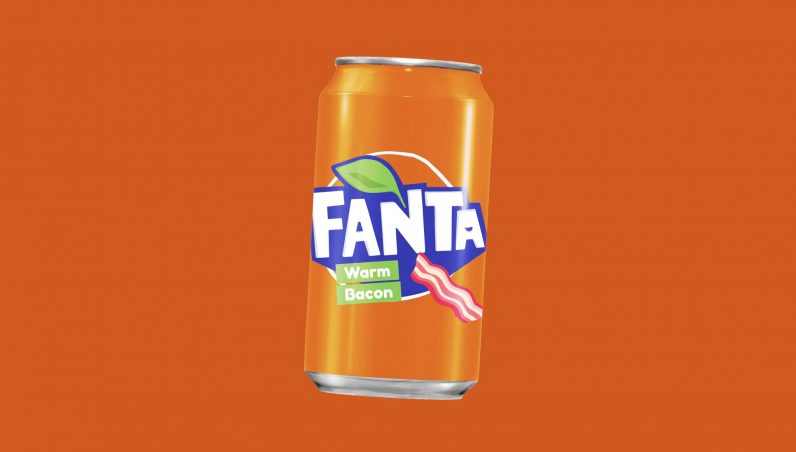 Fanta is my favorite soft drink. The original, I mean. I can’t get enough of that sweet, sweet orange nectar. It’s like crack to me — if crack was invented in Nazi Germany and chugged by the Wehrmacht like lager.

I’m less keen on the weird not-orange flavors though. Peach Fanta tastes a bit like mouthwash, and I’m pretty sure that Fruit Punch Fanta is repurposed industrial slurry that would otherwise be pumped directly into the Hudson River. I’m not a fan.

That said, compared to some of the Fanta flavors conceived by this truly bonkers Twitter bot, fruit punch Fanta is positively tame.

For those craving a potassium fix, how do you feel about Bitter Banana Fanta? It’s like normal banana-flavored Fanta (which isn’t a thing, thank god), but hardened by the relentless cruelty of life.

And if you dig your soft drinks with a hint of inbreeding, you should grab yourself a cool can of British Dog Fanta. Drinking this would presumably shorten your lifespan to that of an English Bulldog.

Those with a thing for Lebanese food get some love too, in the form of the Young Stuffed Flatbread Fanta. I’ll have mine with extra hummus please.

Spanish-born frontend developer Laura Gonzalez, who came up with the idea (and weirdly enough used to wrangle code here at TNW in an earlier life), explained the inspiration for her quirky side-project.

“I moved to the UK and orange Fanta is very bad here compared to the Spanish one,” she explained. When she looked at the ingredients, she noticed that the UK variant contains carrot and pumpkin extracts.

“I sort of was meaning to do a jokey [blog] post about carrot and pumpkin Fanta, and I was just like ‘wait, this could be a bot’,” she said.

So, Gonzalez went to work. Her creation is live and producing some utterly head-scratingly weird beverage ideas. If you’re interested, here’s how she created it.

The underlying software is built with JavaScript and node.js. It essentially randomly combines data from three different lists: a valid emoji, an adjective, and the text for the tweet. This is then turned into a JSON object, and rendered as a webpage using some “very basic” HTML and JavaScript.

You can check this out here. Every time you visit this webpage, it produces a random Fanta flavor.

To tweet this, Gonzalez created a shell script that periodically visits the page, screenshots it (using Puppeteer), and then sends the text and photo to the Twitter API.

“This all sounds super complex, but the beauty of Node is that it has packages for literally everything so it’s a bit like putting legos together. The actual code is probably under 1000 lines total,” she explained.

Gonzalez is proud of her creation. And, for what it’s worth, she thinks some of the “fake Fantas” aren’t particularly heinous. “White Cherry sounds actually drinkable,” she said.

Another favorite is Gay Mystery, which she thinks would taste “super super sweet” and “like Skittles.”

Read next: AC repair tech claims they found a missile in a server room