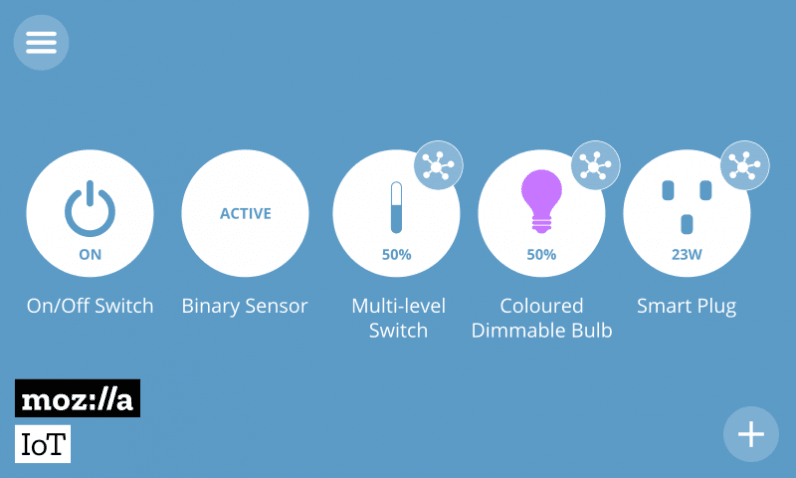 If you’re a smart home fanatic, you’re probably familiar with the struggles of getting devices from disparate developers to play nicely with each other. You may have a thermostat that works over one protocol, and a light switch that communicates over another. The fragmentation is real, and it means that consumers are having to make difficult choices about the connected gear they buy.

Mozila has noticed. Yesterday, the foundation launched one of the first salvos in its Project Things effort: an internet of things (IoT) hub called Things Gateway.

Using a Raspberry Pi and Mozilla’s newly-released software, users can control their smart home devices through an enticing voice- and browser-based interface. The Things Gateway uses the microphone in users’ computers, and provides a URL that can be accessed from anywhere in the world.

Mozilla’s tech allows users — not necessarily developers — to write simple scripts using “If this, then that” logic. These perform actions when conditions are met, and work across all supported IoT devices.

So, through the Things Gateway, you can theoretically tell your thermostat to crank up the heat when you turn on the living room lights. You can already do similar stuff with IFTTT, but it’s nice to have an open and non-commercial alternative.

In addition, the Things Gateway is extensible. This doesn’t just relate to additional devices (support for which will be added gradually), but also third-party applications. These can access the gateway through OAuth.

Out of the box, the Things Gateway supports Zigbee and Z-Wave, although users will need to purchase compatible dongles separately.

Although Mozilla doesn’t call Things Gateway a hub, it’s analogous to the centralized smart home hubs that have existed for ages.

Things Gateway is interesting as it’s a completely open system. With commercial hubs, there’s always a risk that the manufacturer may get bought or run out of cash, resulting in support for products being canned.

The best example of this is the Google-owned Nest, which bought hub maker Revolv in 2014. Seventeen months later, it permanently discontinued the product. When Nest turned off Revolv’s servers, it bricked the hubs that punters had previously bought for over $200.

That risk doesn’t apply here. To be clear, I’m not casting doubt on Mozilla’s longevity, but if worst came to worst, Things Gateway would continue to exist. The software is open source, and freely available on Github.

It’s pretty exciting, but worth remembering that Project Things isn’t just a single project, but rather an effort to address the broader issue of IoT fragmentation. As you’d expect from Mozilla, it’s taking an open and standards-driven approach to this.

In addition to consumer-oriented products, like the aforementioned gateway, the firm is interested in the technological fundamentals of how these devices talk.

It’s lobbying for the creation of an accepted open standard. Mozilla is an active contributor to the W3C’s (World Wide Web Consortium) Web of Things Interest Group. This wants to give device manufacturers a consistent, standardized protocol for devices to communicate over.

If ultimately accepted, it would create a long-awaited even playing field for the Internet of Things, and would go some way to addressing the creeping issue of vendor lock-in.

If you’re interested in building your own Things Gateway, you can read Mozilla’s how-to here.