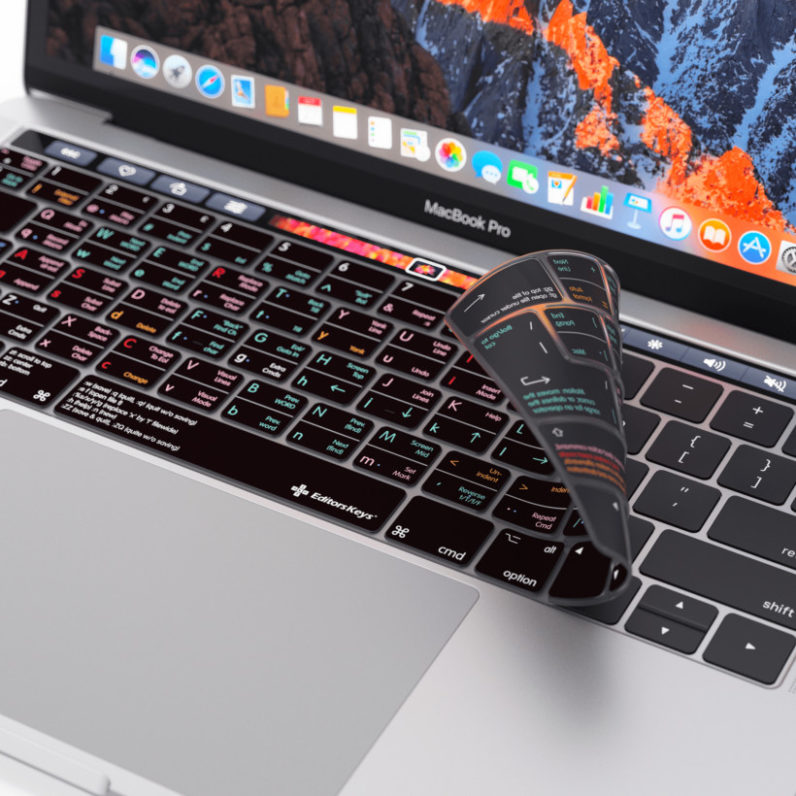 The Vim text editor is beloved by programmers. It’s ludicrously powerful, and lets you accomplish tasks with greater efficiency than you otherwise would. But boy, is it complicated. So complicated that one of the most popular questions on developer Q&A site Stack Overflow is “How do I exit Vim?“

Most people’s introduction to Vim is a bit of a baptism of fire. You inevitably spend a lot of time looking at reference guides trying figuring out how to do the most basic of things. But there’s a far more graceful alternative in the form of Editor Keys’ Vim Keyboard Cover — a silicon membrane that goes over your MacBook Pro keyboard, and tells you what each key does within Vim’s various modes.

Editor Keys is a Manchester-based manufacturer of keyboards and keyboard accessories. The company mostly targets the creative industries, and produces covers for audio and video editing applications like Ableton, Avid Media, Cubase, and much of the Adobe Creative Suite.

The Vim Keyboard Cover is the first one from the company aimed at the developer market, as Editor Keys director Mark Brown explained. He said that the company noticed a significant amount of organic search traffic for the product, in addition to several direct inquiries from Vim users. He spoke to several Vim users, and realized that it fit into the company’s philosophy of “speeding up your workflow, while protecting your keyboard.”

The covers are designed in the UK, and manufactured in China. They consist of a single, thin piece of silicon, designed not avoid hampering typing, and the writing on each key is individually placed by hand. According to Editor Keys, the Vim Keyboard Cover also protects against dust and spills, although I didn’t test this out personally. I guess you’ll have to take their word for it.

It’s a little hard to explain, but one of the things I love most about Vim is that it’s designed to keep your hands over the letters of your keyboard. It doesn’t have you reach for the arrow keys to get around. Everything can be accomplished with your wrists being completely static.

The Vim Keyboard Cover feels like a logical extension of that. Because with it, you don’t need to look at hastily-scribbled notes or online resources to figure out what you’re doing. You just glance down at your keyboard, and keep working.

Editor Keys’ Vim Keyboard Cover costs £27.99, and is available for the MacBook Air, the MacBook Pro Retina, and the MacBook Pro with TouchBar. According to Mark Brown, the company also intends to release a model specifically for the Surface Pro and Surface Book Line, with other high-end PC laptops to follow.

While it’s no replacement for actual expertise with Vim, it can help keep you productive when you’re just getting started, as well as removing the massive intellectual overhead that comes with using it.