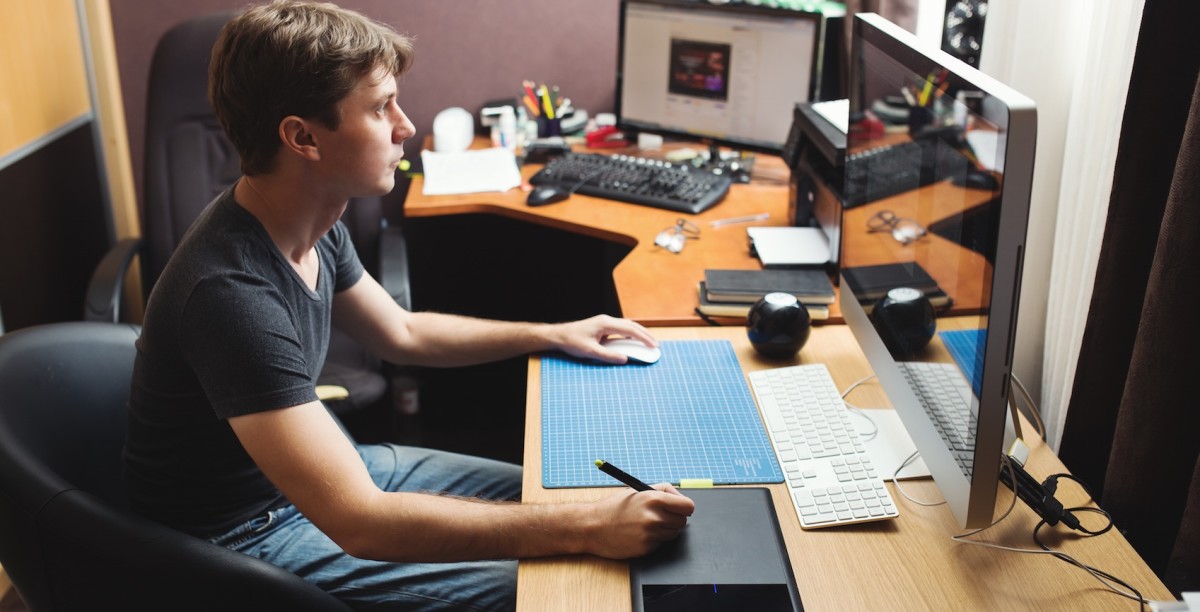 For the best visual precision, every Web design project eventually requires fully-composed mockups for each page and interface. Informed by technical constraints, these mockups must act as collaborative visual design documents for regular discussions with developers – not just something you hand off as though the person on the other end is a WYSIWIG factory.

After all, if you want the project to move forward, you must always ensure that your works of digital art are clearly understood by developers who think in terms of frameworks and systems.

As recommended in the free Designer’s Guide to Collaborating With Developers, the first step to proper implementation is predicting  UI limitations that may (and usually will) arise during development.

In the design world, it seems like any beautiful idea should be possible to create in code. HTML5/CSS3 specs have certainly come a long way, but some ideas are still very difficult to build with full support.

When collaborating with developers in the wireframe/prototype stage, always keep in mind the limitations of HTML5, CSS3, or whatever your language of choice. That way, you’ll know what to design and how to design ideas visually so that developers can actually build the interface.

Keep a list near your desk (or in Google Docs) with a collection of hurdles, obstacles, and interface ideas to avoid. While It may be possible to add these features later, you should focus initially on prioritizing interface elements that are most feasible. As you progress in the design, review this list on a weekly basis with developers so that you don’t get lost in a high-fidelity design of something that’s actually a technical nightmare.

Now that you have a good starting point for design feasibility, let’s examine some other methods to keep in mind as you design.

When it comes to exploring interactions, prototyping is the most efficient platform for discussing feasibility. Aside from actually coding your designs, prototypes are far more effective than simply describing or annotating flat wireframes and mockups.

Even rough low-fidelity prototypes (also known as interactive wireframes) can show developers the overall framework of content, and the dependencies between content as users click through the experience. While the visual details won’t be anywhere near polished, developers can still provide feedback on design infrastructure.

For example, you might be dead-set on an infinite scroll for a large blog design, but perhaps a cards UI pattern can still serve as an elegant compromise between usability and site load times. On a subtler level, developers can also provide you device-specific feedback. Your navigation header might work beautifully in the prototype, but it may be completely hidden by the address bar in certain browsers and devices.

You simply won’t uncover these technical setbacks (some of which may require a complete revamp) unless you let developers play with your prototype. In fact, part of the reason our app integrated with Photoshop and Sketch was to encourage more designers to cross over into the interactive design stage (even if they prefer to first add fidelity to the visual design).

The field of Web design is quite different compared to mobile app design.

The process of designing a website interface feels similar to designing a mobile app interface. But development is vastly different between these two mediums. When designing a mockup,  you’ll want to consider the potential pitfalls and drawbacks of each feature.

This is especially true of newer CSS3 techniques that are not supported in all browsers(ex: transforms, reflections, clip-path, and masking). While Photoshop and most other design programs let you insert notes next to your design, there is no substitute for a quick feasibility discussion with developers as you prepare for a major iteration.

Below, you’ll find some of our favorite free open source scripts to help with browser compatibility. These resources may not help you directly when designing, but they are certainly an important conversation point when collaborating with developers.

Even if you don’t understand how these scripts work, you should still bring them up with your developers. In our experience, we’ve found that developers appreciate the proactive gesture and don’t mind spending some time explaining any compatibility issues. After all, it is in both of your best interests since late nights are usually a shared misery between designers and developers.

While the homepage design may require the most effort since it’s a portal to the entire site, you also need to apply the same precision to the inner pages.

In some large companies, project managers demand full mockups for every single page due to strict internal processes. In other companies, some developers may have design experience, allowing them to build multiple similar pages from a single mockup (freeing up more time for you to work on unique pages). Adapt the level of mockup detail depending on your company protocol.

Now, let’s examine some of the development considerations for your mockup elements.

A keen sense of graphic design is required for great mockup design.

For example, even if two pages are distinguished only by differences in icons, the safest option is to still create two separate mockups to avoid any confusion. Most of the time, you’ll find it’s safer to create all inner pages and then export icons separately – that way, developers can access the individual icon images and the page designs as reference material.

Before wrapping up your mockup design, follow along with this checklist to see if you missed anything. Here’s a quick list of some things to check for:

On larger projects, we’d recommend including a short document for developer notes. Just be sure to clarify the referenced mockup (and page sections) which pertain to the notes. If you’re working in UXPin, you can add a note to the design itself and while you’re in Preview mode, or you can also just upload a separate document into your project folder.

While mobile app mockups must consider landscape and portrait view, websites must support any view at any dimension from smartphones to widescreen monitors.

If your design is meant to be responsive, then we recommend creating different mockups for each breakpoint to show developers how the layout adapts.

Consider a few of the following changes:

There are no right or wrong answers because each project needs to be handled individually.

When in doubt, the mobile-first approach championed by Luke Wroblewski is always a good starting point (once you’ve completed the initial user research). Design around the content for the smallest screen size, then scale it up as the screen size increases. By building upon the essentials first, you ensure a more enjoyable device-agnostic experience.

To prepare for the transition to development, make sure you label your responsive mockups properly. Filenames must include the responsive breakpoint in pixels along with any other important details(revision date, draft number, retina screen, etc.)

Your goal is to design for every possible situation so the developer doesn’t have to think.

As always, if you’re unsure about how to deliver something, just ask one of the developers what format they prefer. Keep the communication lines open to reduce problems and avoid confusion.

Digital design programs come in many forms from Adobe Photoshop to Fireworks and the popular newcomer SketchApp. Despite the differences in capabilities, the overall mockup design process remains relatively uniform across these different applications.

The following tips are geared toward designers who create mockup assets for developers. Some of these ideas are easy to overlook on the surface, but they make a world of difference when it comes time to write code.

Mastering any design program takes time and switching up your workflow can be daunting. But once you try incorporating these tips, they’ll feel like second nature. When you design with developers in mind, it makes everyone’s job a whole lot easier.

Here’s a few best practices we’ve learned through the years:

For more practical tips, we recommend the Photoshop Etiquette site which includes advice for dozens of topics like effects, layer organization, and typography. To learn more about the anatomy and process of mockups, check out the free Guide to Mockups.

Every developer should at least know about version control systems, which are like digital archives that store previous versions of a script, database, or an entire website. Aside from organizing files, version control is useful for rolling back changes or comparing differences between two(or more) files.

Although version control is mostly used in programming it has found small pockets in the design community. While design-based version control is still new, there are some great resources available. Pixelapse is an online storage application for managing design documents in the cloud. And while GitHub is primarily a code storage platform, they’ve recently added support for PSD files.

Now it’s possible for designers to use GitHub as their own version control system for PSDs. Granted, the site is open source and it may not be a great choice for private enterprise projects – but it is a good way to practice and learn about version control.

Here are some alternatives for design-centered version control:

Photoshop and Sketch both support a wide assortment of plugins for automating tasks and improving typical design workflows. Even though Sketch was built from the ground up for Web design, Photoshop has a larger selection of plugins simply because it’s been around longer and focuses on a broader spectrum of tasks (photo editing, print work, UI design, etc).

We chose the following plugins specifically for UI designers who create interfaces from scratch. These plugins will help you achieve pixel-perfect mockups with less time and effort than traditional workflows.

Mockup and hi-fidelity prototype creation are the last major tasks for the design team before developers take over. To keep your design on track during the transition, offer as many resources as possible and clarify everything. As we’ve recommended before, it’s always better to over-clarify rather than under-clarify.

By designing mockups with developers in mind, you’ll be giving yourself a constant reality check. It can definitely be frustrating when you move from your own routine into a more developer-friendly process. But when you’re working on design projects as part of a larger team, it’s better to compromise on your process than it is to unnecessarily compromise on your design due to breakdowns in communication.

For more tips on collaborating with developers, check out the free Designer’s Guide to Collaborating With Developers. Across 70+ pages, you’ll get real-world advice for including developers in all different stages of design: planning features, wireframing, prototyping, mockups, and testing.

Read next: Apple takes two steps forward, then two steps back, in its event diversity