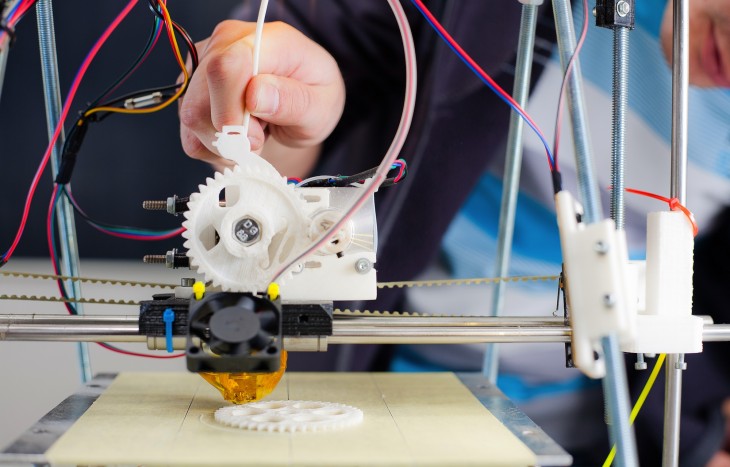 Helen Foley is Marketing Executive at Elanders, a global printing group with production units in nine countries on four continents.

Love it or hate it, 3D printing is here to stay. It is considered the future of print and manufacturing, and is set to dramatically change the way we buy and produce products in the future.

Over the years, experts have been researching and developing different concepts, printing designs and processes and several breakthroughs have been made — including a working 3D kidney made in 2002 by the Wake Forest Institute and a prosthetic leg, inclusive of the knee and foot, etc. made in 2008 by Bespoke Innovations.

Outside of professional and engineering circles, consumers have been able to get their hands on the first affordable devices that are powerful enough to produce small 3D printed objects, mainly through Kickstarter projects. Those who have had their eyes on the slightly larger machines for bigger objects can buy 3D printers like The Buccaneer.

More commercially, leading retail businesses such as grocery giant Tesco have declared their interest in integrating a 3D printing service into their stores in the future.

So, to help you get inspired by the “next big thing” in tech and design, we’ve gathered the 15 of the best 3D-printed items from 2013.

If you’re not in the US or your idea wasn’t noticed by Google during their “#ifIhadglass” Twitter campaign earlier this year, there is an alternative! Chinese entrepreneur Sunny Gao proved this by printing a fully functioning pair of Google Glasses at a hackathon event in Shanghai.

Unfortunately the 3D printed version of the glasses doesn’t boast Wi-Fi or Bluetooth support, unlike the real thing – but they look awfully close. On the plus side, you have an option to choose your preferred colour, which will please the more fashion-conscious amongst us!

Chinese students from the School of Automobile and Mechanical Engineering at Changsha University of Science and Technology constructed their first race car, “FNX-13,” using 3D-printed parts. The race car took the brains and brawn of 40 students, and uses a Honda 600CC motorcycle engine, allowing it to reach speeds of 150km per hour (95 mph).

Despite being a manufacturing marvel, the project is still a long way from becoming affordable for the masses, with as much as $37,570 spent on printing materials and equipment, since the cost of 3D printing is still reasonably high.

Easton LaChappelle, a 17-year-old high school student from Colorado, used free online resources for 3D printers to construct a fully functional prosthetic arm and hand. The high school student found inspiration from one of his past projects which involved building a robotic hand, made entirely of Lego when he was 14. His creation was able to open and close its fingers using two things: fishing line and servo motors.

LaChappelle has already visited The White House and demonstrated his new invention to US President Barack Obama. Now, the high school student is working at NASA on the Robonaut team.

Layers in Design have finally found a use for your collection of old water bottles. This new contraption, “Screw You Vase,” is priced at €130 (£110) and transforms 12 water bottles (all of a similar size) into a large vase.

The 3D-printed model is available in green or black and uses the cap on the top of the bottle. It then balances the three bottles from the centre to form the base of the vase before expanding out in a circular formation.

Finnish designer Saad Alayyoubi, AKA SaGaDesign, hasn’t just created a perfectly good stand for your iPad, but in fact, a work of art. The €161 (£136) miniature muscle-man, reminiscent of the Greek titan Atlas, not only looks impressive, but uses every bit of his 3D-printed strength to hold your iPad at the perfect viewing angle.

As mentioned on the product’s Shapeways page, it also appears to defy gravity as the mini man holds an object that is much taller than him. The product, named “Sisu” roughly translates to “determination” or “grit.”

Why print a guitar? Well, there is a little-known fact that the supplies of exotic woods are running considerably low, so manufacturers of instruments need to start researching for alternative materials.

Scott Summit, co-founder of Bespoke Innovations says that the good news is, there is no Gold Standard for guitars compared to other stringed instruments like the violin, so they can be made of anything. In addition, guitarists prefer to have their own unique sound in addition to a customised guitar face, something that will be available with a truly original, 3D-printed guitar.

Andy Hudson-Smith and team, of The Bartlett Centre for Advanced Spatial Analysis at the University College London, discussed the design and construction process of building 3D printed mechanical clock on their blog.

Using the MakerBot Replicator 2, the team printed the clock pieces, consisting of cogs and connectors. Each cog took around two hours to print. Meanwhile, the frame sections took around three to four hours to print using the same settings.

To demonstrate the clock in action, creators use a 600g weight which requires winding every 48 hours.

If you’re on the road and your phone battery dies, you can’t always run the risk of using your car battery to charge it. So, the hand cranked power generator may be just what you need for your next trip.

The rotor spins up to 4,000 rpms and produces about 40 volts without any load; sufficient to charge the small gadgets we all carry around with us on a daily basis.

Erichsen, the designer behind the 3D-printed hand cranked power generator, was awarded the place of first runner up in CGTrader’s 3D printing competition, where he showcased his new creation.

Other 3D-printed items you might want to consider taking with you on your next trip are Gear Wraps. These small, strong and lightweight cable wraps are printed from the material ABS and were designed by Eddie Licitra.

Gear Wraps help you keep your ear phones, chargers and USB cables organised; removing the possibility of them being tangled with each other in your bag. The fact that they can now be printed on demand means you should never again run out of these handy little cable organisers.

This isn’t as much a 3D-printed item as it is a printer itself. 33-year-old Kodjo Afate Grikou wanted to help his community in West Africa, so they can use it to print utilities that they aren’t able to source locally, such as kitchen utensils for cooking.

The structure of the printer uses very little in terms of new parts, as it is mostly made up of e-waste and scrap metal. Before building, he set up his project on the European social funding website, ulule. The project received more than €4,000 (£3,400), despite the printer only costing him €73 (£62), which was mostly through purchasing new parts that he wasn’t able to source locally.

Grikou hopes that his innovation will inspire teenagers and young people in his community to attend school and gain an education so they can make further life changing developments that will benefit not only their lives, but also others around them.

The European Aerospace and Defence Group (EADS) printed this bicycle which weights 65 percent less than the traditional bicycles on the market today.

It is grown, rather than constructed, from nylon power using a process called additive layer manufacturing – which is similar to 3D printing. EADS combined this with another process called laser sintering to reinforce the structure and make the frame robust, yet light. The result: a product they are calling “Airbike.”

A similar process to laser sintering is also used by NASA. They have recently performed successful tests of their rocket injector, printed using a process called direct metal laser sintering.

The printed injector withstood a pressure of 1,400 pounds per square inch and 6,000 degrees Fahrenheit. Such figures signal huge progress in 3D printing and are too significant for future printers not to consider, when building their next creation.

Printed rockets might be too ambitious a project for you if you’re just starting out with 3D print, so perhaps try designing your own unique smart phone case first. There is a range of templates online for the latest smartphones regardless of whether you own an iPhone, Samsung, HTC or Nokia.

The case we’ve featured is from the Shapeways community, designed by user Genghis. It is printed using a strong and flexible plastic, starting at $20 (£12).

Of the various creations we’ve covered so far, the bionic ear is perhaps one of the most unusual. To construct the ear, Princeton University researchers print the polymer gel onto an approximate ear shape and implement calf cells onto the matrix. The sliver nanoparticles fuse together to create an antenna which picks up radio signals before being transferred to the cochlea, which translates the sound into brain signals.

Despite all of this, researchers have yet to draw up plans to attach the ear to the human head.

Drivers of older cars, such as the classic Aston Martin DB4, can often be heard saying ‘They don’t make them like this anymore!’ Well, with 3D printers available to consumers, plus a little bit of computer aided design (CAD) knowledge, you could effectively ‘make them like they used to’ once more and end up with a fully functioning life size car.

Ivan Sentch is currently building his very own Aston Martin DB4, made from a variety of plastics which can be bought for $30 per kilogram. He will then use plywood to hold the structure in place until every module is complete.

His estimations calculate that the finished product will cost $1,800 (£1,100), after installing parts such as the engine, drive train and suspension, taken from a Nissan Skyline.

Did we miss any of your favorites? Discuss in the comments.