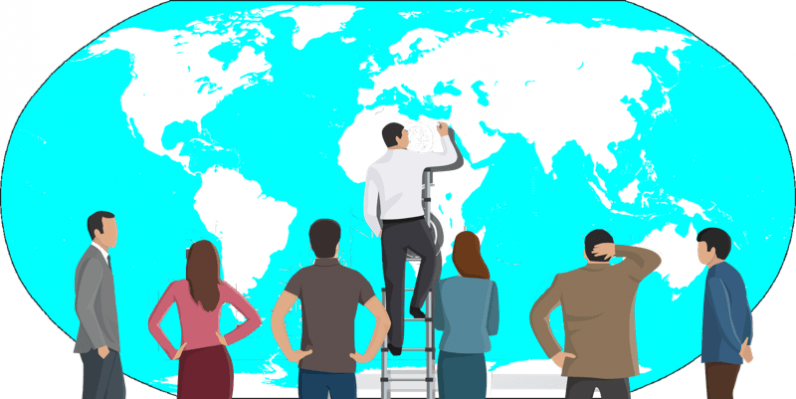 Governments around the world are overseeing a surge in bureaucracy, and increasing intrusion into people’s personal lives, running the ever-increasing risk of tyranny among the people. The world may be divided by tectonic shifts, but what if there was a solution to solve crumbling nation states and the global challenges politicians seem incapable of fixing? What if it was possible to live in a borderless world where increased personal freedom was a given right?

Bitnation, a proof-of-concept Decentralized Borderless Voluntary Nation (DBVN), is an open source movement that is providing a platform for people to become a citizen of any nation through a smartphone application. In the real world individuals are forced to compete with each other in order to achieve their desired governance outcomes. However, this can often lead to violence, coercion, and conflict. With Bitnation’s Pangea software, a Decentralized Opt-In Jurisdiction, citizens can create nations, join voluntary nations on the Ethereum blockchain, and conduct peer-to-peer negotiations. It is aiming to reduce competition between citizens and increase competition among nations for citizens to improve the quality of governance.

Through an early version of its blockchain jurisdiction for both iPhone and Android devices users are already creating their own voluntary nations on the platform. Some of which include Liberland, Antifa International, Sin City, Tea Party, and Republica Catalana. Notably, given what is going on in Catalana at the moment this is all the more relevant. By creating or joining a voluntary nation a citizen will have access to a choice of services that are governed under the nation’s own laws and policies, which is competing for citizens in a free market that rewards good governance.

According to Bitnation’s white paper, the goal of the platform is to create a ‘global free market for governance services,’ adding:

“A post-Nation State world of Voluntary Nations, City States, and Autonomous Communities which compete for Citizens by providing a range of opt-in governance services. In our world sovereignty shifts decisively from the State to the Citizen, and humanity reclaims freedom of choice when accessing governance services.”

Through the use of peer-to-peer agreements on Bitnation, citizens are able to resolve disputes with other citizens, positively enforce contract compliance, and access governance services from DBVNs using the legal code of their preference.

Additionally, by joining or creating a nation, citizens inspire one another across social and cultural milieus and geographies.  According to Bitnation, these new forms of governance can have any legal framework, economic model or decision-making mechanism promoted by their founders; however, citizens retain their personal sovereignty at all times and voluntarily join and leave nations.

“Yet these organizational models can only outcompete Westphalian state sovereignty if they can provide credible alternatives to the Nation State’s raison d’etre, the provision of security and justice,” Bitnation said. “Voluntary Nations must provide better, more secure, faster, cheaper, and peer-to-peer alternatives for these services. In other words, the global Westphalian oligopoly needs competition from decentralized, borderless, and voluntary jurisdictions.

According to Bitnation, through Pangea people can reclaim their ‘sovereignty and build a positive future through decentralized governance.’

Recognized as a ground-breaking organization for decentralized governance services and citizenship, Bitnation is delivering concrete solutions for real-world problems. In 2015, it created software to provide blockchain IDs for refugees – winning the UNESCO NETEXPLO 2017 Grand Prix – and a blockchain Public Notary with Estonia’s e-Residency programme, which has been used by thousands of users to record contracts and agreements on marriages, birth certificates, wills, and land titles, to name a few.

With the release of its blockchain jurisdiction, Bitnation is creating a user-friendly infrastructure for the Governance 2.0 revolution. Applications are already being built to run on Bitnation’s blockchain jurisdiction to provide extra peer-to-peer governance services. These include security, insurance, and education. Bitnation is expecting many more to emerge after the formal API release, with various ideas and proposals being discussed amongst Bitnation citizens.

Bitnation’s technology already has over 200 new nations registered, more than 100 embassies and consulates, as many as 150,000 citizens on all five continents, and a positive open source community of over 2,000 contributors.

The Pangea Arbitration Token, also known as PAT, is an Ethereum-based in-app token for the Pangea jurisdiction that powers its platform and is a proof-of-reputation for citizens.

When citizens create or complete contracts or a dispute has been resolved on the platform a citizen will receive non-tradeable reputation tokens through Lucy, Bitnation’s AI bot, name after the first human discovered on Earth. Through the accumulation of reputation tokens earned a person can receive tradeable PAT tokens, ensuring that an individual can’t simply buy a good reputation or achieve it through popularity.

The public PAT token sale starts on March 25th. There will be a total PAT token supply amounting to 42 billion. During three phases of the initial coin offering (ICO), 34 percent of the PAT tokens will be sold: presale, public sale, and slow release, which will see the remaining tokens sold over a 24-month period. Of the remaining tokens, 18 percent will be allocated to founders and core contributors; 14 percent for future options and bounties; and 34 percent will be earned on Pangea by users.