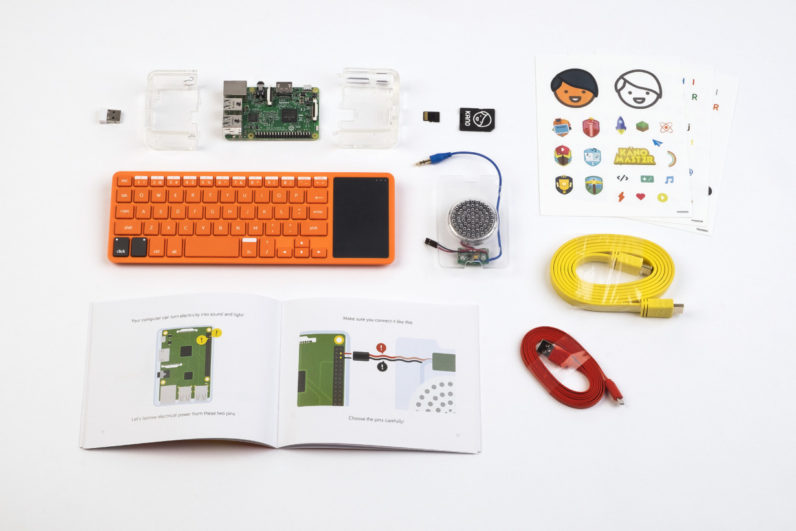 Growth Story is a new 4-question format we’re doing about startups finding and influencing a defining metric that helped to really grow their company.

We had an inspiring chat with Alex Klein, CEO and founder of Kano, a company that builds computer and coding kits for kids of all ages. Kano’s winning metric? Hiring interdisciplinary coders who could help keep kids really engaged on their self-made computers. This is his story, use it to your advantage.

“Kano is a new kind of computer company. We create computers that you build and code yourself like Lego. They’re connected by an online coding platform that let any beginner at any age make music, games, art-like animations, and meld and mix data with the simplicity and fun of a game.

The core product has been shipped to 86 countries since 2014, and about 150,000 people of all ages have built a computer or a screen, or a server, or have made their own versions of games like Minecraft, Snake and Pong, which have been created and shared over 25 million times on our online platform that links the kits together. Recently we’ve introduced add-on kits that let you code in cameras, speakers, sensors, and pixel grates.

Our mission is simple. We want to make it as simple and fun to create with computing as it is to consume it.”

“When we got started there was a lot of skepticism surrounding our concept.  A lot of people said, well, you know kids can get an Amazon Fire tablet for 50 bucks – a really fast, beautiful computer with a touchscreen. It’s going to have all their apps. Why are they going to want to spend any time building your computer and coding your computer? Kids just want to buy one.

But after we shipped the very first production units in September 2014, kids loved them, and their parents were going wild. We were mentioned by Steve Wozniak. The reviews were incredible.

Most of the reviews centered on the step by step building experience. The original computer kit comes as a box of bits with a book, and you put the bits together.

So a metric that I thought about a lot was overall time on kit for kids. We didn’t want this to be a one and done experience. We wanted to create this DIY PC that would grow with you, that would serve not just as a playground, but a place where you sharpen your skills, a place where you level up and unlock new powers – a place that could involve you for hours and hours on end.”

“We were doing tons and tons of workshops with real kids and trying to not think of them as kids, but as beginners of all ages. We spent time in workshops in South Africa, in Sierra Leone, on the east and west coast of the US. We went to the Middle East. Wherever we went, we tried to expose the kits to different types of people of different ages, but especially kids, because they have that curious mind and will tell you exactly what they think. Plus, they’re easily distracted, which makes for a good test or your product’s engagement.

There was a workshop early on with this boy called Khaled, sometime before the product came out. After the workshop we always asked kids ‘How do you feel? Describe how you feel.’ This kid said, “You know, adults, they think we’re incapable because we are so young, but today we made a computer and even more than that, we powered it up with this matrix code and that makes us super children.” I was like, ‘yeah.’

First of all, plus one for the Matrix reference and number two, the matrix of the computer is the beginning. It’s our Trojan horse. It shows you what’s inside the device that you take for granted.

But what really made this kid excited, is how he ended up with Matrix code, feeling like Neo. So then we started to talk a lot in-house about how we can make a new generation feel like Neo – feel like they’ve entered a world that is infinite in possibility because they see below its surface and manipulate the world therein. And so that became a huge focus.

Nowadays kids are spending upwards of ten hours on that kit playing with the software, hacking the hardware. And that’s 10 hours on average.”

“A big principle is that we’re a creative computing company. Creative is a word that gets bandied around a lot especially these days, but the bottom line is we believe that computer science is important to learn.

Making music, making graphics, manipulating games: The logic underneath serves an artistic end. So we looked for and ended up hiring ingenious developers who also have a bit of multidisciplinary persuasion.

We have one incredibly talented bare metal software engineer that we got from Broadcom who’s also an actor on the side. We have another engineer who plays the violin and we have another engineer now who’s a front end web guy, Victor, who’s really an excellent music mixer. He worked with some great classical pianists on producing their albums.

I think that the one thing we looked for, was a type of multidisciplinary person. Misfits, if you will. People who never really fit into the traditional disciplines, but still managed to excel because they have curious minds.

Curiosity is a huge one for our business, because we’re building products that are intended to spark curiosity in a young person and to encourage them to learn by doing.

We look for people who have learned by doing and who have maybe taken on a variety of different kinds of roles.

We also – and this sounds kind of cheesy, I guess – but Kano is a company that you could criticize at times for being more of a cause than a business. We believe computing needs to change. It’s needs to be broken open. It needs to be democratized. It needs to be de-mystified. People who end up doing really well at Kano are ones who believe in that.

They believe in the cause, while not taking themselves too seriously and still having a bit of a laugh, and remembering that we’re just part of a bigger movement that’s going on around us. I guess that combination of multidisciplinary, curious, humble, but also committed to making a change in something that’s socially relevant.”

Read next: How Lithuanian tech companies are crushing it in the US