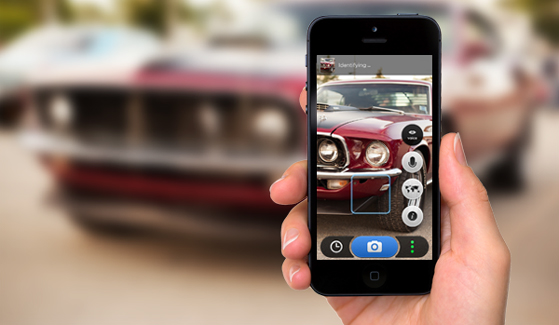 CamFind, the company behind an image recognition and visual search app of the same name, today launched CloudSight, a public API that uses the CamFind technology.

CloudSight analyzes images — as opposed to text — to return relevant Web-based information to users. The API is designed to be accessible and easy for developers and companies to integrate into their own devices and platforms.

Both app and API employ deep learning, a popular technology that “learns” over time and from its mistakes by simulating certain brain functions.

“Using deep learning, we set up an advanced image recognition technology to give results from our server,” Dominik Mazur, CEO and co-founder of CamFind told TNW. “With this, we can go deeply into identifying, say, a brand of car or breed of dog — not just a classification. What sets us apart is that we always have an answer. It’s not just an exact answer or nothing.”

A typical example of how this tool works could be at the supermarket, where the user wants to cook something with eggplant. They can take a photo of the eggplant using CamFind’s visual search feature and uncover related information from the Web, such as additional images, nutritional information, recipes, pricing and more. CamFind lets users photograph, identify and gather a range of information on objects and products from any photographic angle.

Its features include Internet search, related or similar image results, price comparisons and online shopping, location information, and sharing to social networks. The app lets you upload and save images from the Camera Roll, and includes a QR code and barcode scanner, language translator, voice search and more. It recognizes nearly 40 million images.

The public API now lets any app integrate visual search technology. According to Mazur, CamFind’s technology is already being used by over 750 companies, including international marketing agencies and app developers. The company is currently working with additional North American retailers and cell phone manufacturers.

The technology, for which CamFind has 11 patents pending, is available for developers and companies. The API is designed to be functional and accessible with a goal toward saving companies time and money by removing the need for them to build similar technology.

In addition to its API launch, CamFind announced it raised $4.8 million in seed and bridge round funding to continue working on this technology.