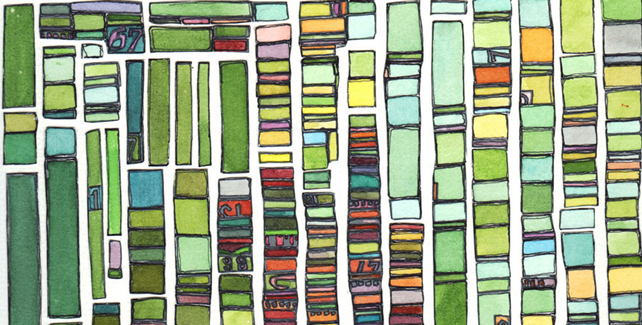 Data doesn’t have to be ugly or boring. In fact, if Laurie Frick has her way — and it’s certain that she will — your data will be not only useful, but beautiful to look at.

Laurie Frick is the creative mind behind FRICKbits, a free iPhone app under development via Kickstarter, whose algorithm takes your phone’s location data and creates an artistic pattern on your screen. This dynamic abstract art changes over time as new data is recorded — like when you go somewhere. A screen tap toggles between the actual map and the unique pattern that it generates.

As an artist, Frick goes for the visual as she seeks not only to make sense of and derive meaning from patterns of self-tracking data, but to liberate it.

The goal is to raise consciousness around reclaiming our own data and using it as we choose. According to Frick’s Kickstarter statement, “…instead of agonizing about every big corporation tracking us…take back your data and make it something good. Use technology to boost a little self-reflection. Not ugly graphs and charts…but genuine art.”

You can crunch any kind of data to make the pretty pattern — for example, the Austin-based mobile app company, thirteen23 had Frick use its chat metadata to construct a huge art installation in its lobby. The consumer app Frick is creating, however, will use location data. Why? Because location data generally repeats itself day after day, with some variations, so what emerges is a unique and personalized portrait.

FRICKbits only gathers occasional movements, so it doesn’t run down your battery and denotes those locations on a map with contrasting, brightly colored dots. Users can choose and change color palettes at will. All information is private and shared only at the user’s discretion.

Want to get in on the deal? Any contribution up to $25 gets you a download of the app plus high-resolution wallpaper for your phone, tablet or desktop. 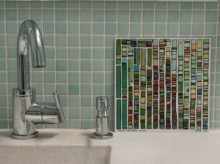 Contributing $55 or more gets you the real print on metal patterned portraits, the FRICKbits signature look. They’re waterproof with a satin finish and can be mounted in any location, such as the kitchen or bathroom, or on a desk or book shelf.

Anything over $1000 gets you a beta version of the app while you wait for the launch, multiple pattern portraits in various sizes, undying gratitude and dinner for four cooked by Laurie in your choice of four locations (San Francisco, Los Angeles, Austin or New York).

On Day 1, FRICKBits already met its Kickstarter goal nearly twice over. The campaign runs until September 7.

Right now, development is for the iPhone only, but Frick is open to an Android version as well. Estimated delivery date for the app is in September.