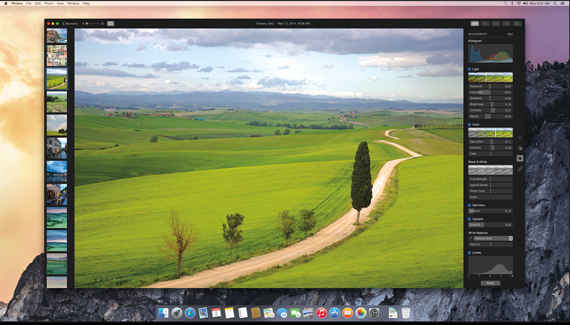 The shoe has finally dropped. Apple confirmed today that it’s ditching Aperture, its photo management tool, and iPhoto, its consumer photo editing app, in favor of Photos, a brand new desktop and iOS duo slated for debut in 2015.

It all makes sense. While Aperture has undergone some fairly high profile updates in recent years, iPhoto had stagnated badly. When the back-end databases of both apps were hitched together last year, it was a warning that something was on the horizon. But when?

Apple works on its own timetable and was not in a hurry to move things forward publicly. But in the background, as development of the new Yosemite operating system, announced at the WWDC conference, took shape the time to acknowledge a change in direction had finally come.

Not that there’s an urgent need to take action right away. The apps will be fully operational for quite awhile. And even after Yosemite is introduced later in the year, Apple has said it will support both iPhoto and Aperture in the transition.

Good news for whom?

A new photo app, indeed photo system that combines Mac desktop, mobile and iCloud, is bound to be welcome news for the consumer iPhoto crowd. And it’s sure to make some folks at Adobe smile, too. Even pro level-photographers and advanced enthusiasts who settled into the Aperture groove, while perhaps shaking their heads in dismay, seem to accept the inevitable.

“I have to admit, on one level I’m a bit relieved that we finally know what’s happening with Aperture, instead of the limbo it’s been in for the last few years, ” said Jeff Carlson, a professional photographer and author in Seattle. “I think the timing is a little odd, since anyone still using Aperture will no doubt start looking seriously at Lightroom to prepare for what’s to come.”

Said Derrick Story, a pro photographer in Northern California, “My feeling is that Apple had to build a new app that incorporates Mac OS X, iCloud, and iOS. Trying to patch the existing software just feels clunky at some point.”

This move by Apple acknowledges changing times. Now that nearly everyone has a camera in their pocket — literally — we are all, in a sense, photographers. Since 2005, when Aperture came on the scene, followed the next year by competitor Adobe Photoshop Lightroom, a huge shakeout has taken place in the photo industry.

Not only have smartphones like the iPhone slaughtered sales of low-end point-and-shoot cameras on the consumer end, the DSLR market also took a hit from smaller, lighter, but powerful prosumer-level compact mirrorless interchangeable lens cameras, all catering to aspiring photo enthusiasts. The market was converging and the direction was toward the middle.

Says Texas photographer Will Porter, “At one time, Aperture was the top dog in the world of raw workflow apps. I had some hope that they’d roll it off into a wholly owned subsidiary like FileMaker Pro, with the idea that the new independent company would release a Windows version of Aperture. Instead, it seems that Apple has decided that the future of photography lies in the iPhone.”

Convergence took place on the software end too. When it was introduced nine years ago, Aperture was a pro-level photo management tool with a pro-level price tag. Over time, however, the price dropped and numerous updates made it easier to use and more accessible to a wider range of photo enthusiasts.

Similarly, Adobe’s Lightroom, entering the scene as a direct competitor, wound up following roughly the same path. Now, only one will be left standing.

The Photos app, which will be released next year, will offer a streamlined connection between Apple’s desktop and iOS photo apps, one that Apple has been striving for ever since the introduction of iPhoto for iOS in 2012, in addition to its enhanced concentration on the cloud.

Waiting in the wings

What choices will users have after Aperture is finished and iPhoto users move to the new Photos app? Adobe is awaiting what well may turn into a flood of new customers for its new Creative Cloud Photography program, according to a blog post by its Vice President of Digital Imaging, Winston Hendrickson.

Another viable alternative to Aperture is Corel’s AfterShot Pro, for those who don’t want to get involved in a subscription.

Said Greg Wood, Corel’s product manager, “We’re getting ready for Yosemite now and unlike Lightroom, AfterShot Pro already supports the use of the file system to manage your photos — like Aperture does. In the coming weeks, we’ll be looking for more ways we can make the transition easy for Aperture users and you can expect to see more from us with AfterShot on the Mac in the near future.”

The larger question for photographer Carlson, though is how much the new Photos app will appeal to the pro crowd. “Will Photos for OS X include any pro-level features? Will there be an upgrade path? I suspect that a brand-new app will start basic and move up over time.”

Story believes, that as with the evolution of Final Cut Pro X, Apple will start at a basic level and gradually gain ground to appeal to the most advanced users, adding more and more pro level features.

“Personally, I’m going to sit tight and wait and see how my Aperture libraries migrate to Photos,” Story said. “I can always keep a legacy machine running Aperture during the transition period. Because I like the Apple ecosystem, I’m willing to wait and see how this pans out. If I can integrate my iPad and iPhone into my overall photography workflow, then I see that as a move forward.”

Also see: Apple will phase out Aperture and iPhoto, replacing them with the the Photos app