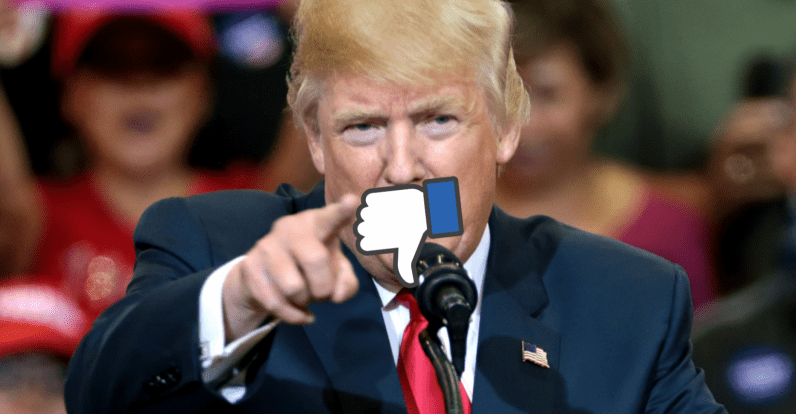 In a Wednesday morning interview on Fox News’ Fox & Friends, Donald Trump claimed children are “almost immune” to COVID-19. Evidence suggests this is not true. Trump also suggested schools should reopen because the virus will “go away.”

The video was then shared on the president’s Facebook page. The social network decided this violated its content guidelines on misinformation and removed the post, as reported by NBC News.

It’s one of the rare times the social network has acted on one of the president’s posts. A Facebook spokesperson told NBC:

This video includes false claims that a group of people is immune from COVID-19 which is a violation of our policies around harmful COVID misinformation.

The President was stating a fact that children are less susceptible to the coronavirus,” Courtney Parella, deputy national press secretary for the Trump campaign, said in an emailed statement. “Another day, another display of Silicon Valley’s flagrant bias against this President, where the rules are only enforced in one direction. Social media companies are not the arbiters of truth.

Whether Facebook was justified hinges on how loosely you interpret “almost immune.”

Children do tend to have less severe symptoms than other groups, but have died from the virus and can transmit it to more vulnerable groups. Because children tend to have milder symptoms, they are also less likely to be tested — a matter compounded by the fact most schools have been closed for several months.

The degree to which children can spread the virus is something researchers are still figuring out, but recent studies suggest they may be able to spread the virus more than previously believed.

One of the largest such studies, a South Korean study tracking transmission among roughly 65,000 people, suggested children between the ages of 10 and 19 can transmit coronavirus at least as well as adults, for instance.

Another suggested children have similar viral loads to adults. This alone doesn’t necessarily mean children are transmitting the virus higher than previously insinuated, but it does suggest more research is needed.

At the very least, it’s an indication that calling children ‘almost immune’ is misleading.

Read next: There is no productivity software