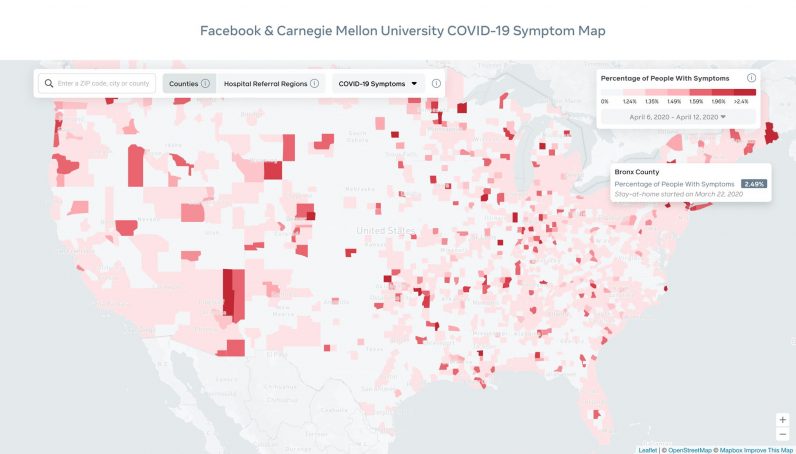 Mark Zuckerberg today revealed Facebook has teamed up with Carnegie Mellon University to help track the spread of potential COVID-19 cases around the world – even situations where there hasn’t been an explicit diagnosis.

The company today revealed an interactive map that tracks where people are experiencing symptoms from the novel coronavirus throughout the US, based on data from an ongoing survey the company is running with Carnegie Mellon. The map is granular enough to let you see an estimated percentage of people with COVID-19 symptoms down to the county level

To reiterate, the map shows an estimated percentage of people experiencing self-reported COVID-19 symptoms, not confirmed cases. Still, Facebook hopes the aggregate data could be useful for guidance regarding the virus. As Zuckerberg puts it:

Understanding how Covid-19 is spreading is critical for local governments and public health officials as they allocate scarce resources like ventilators and PPE, and eventually to decide when it is safe to start re-opening different places. Researchers believe these symptom survey maps can be an important tool in making these decisions.

The company says the survey currently includes a sample of users over 18 years of age within the US, but company plans on going global “this week,” according to Mark Zuckerberg.

Considering it’s likely many more people have been infected than tested, and given Facebook has over 2 billion monthly users around the globe, the data could prove insightful. And to assuage privacy concerns, the company says only Carnegie Mellon researchers can see individual survey responses — Facebook only sees the aggregate information.

You can try out the interactive map here. It can be divided by either counties or hospital referral regions. Facebook says it plans to update the map with new cases information daily.