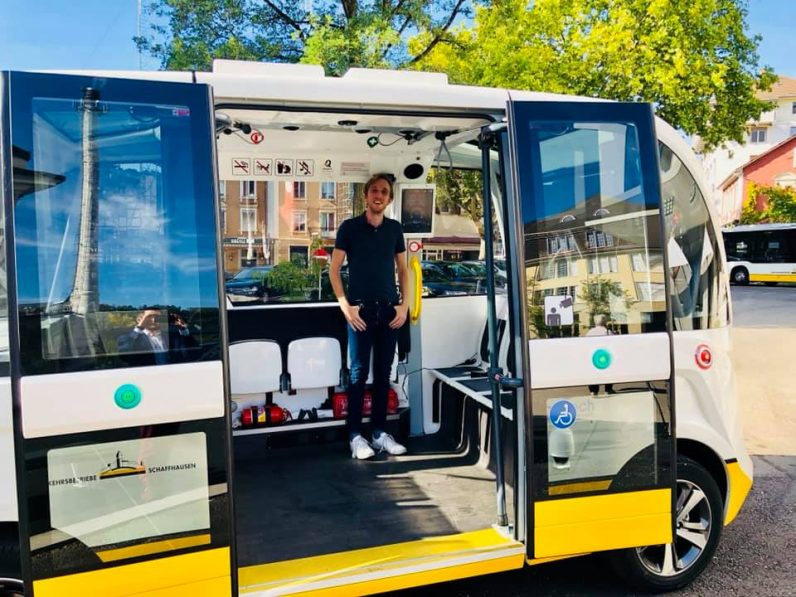 It was like navigating traffic in an electric-powered egg on wheels.

The canton of Schaffhausen is just 30 minutes away from the Swiss city of Zurich, but the municipality of 81,000 residents is home to less than one percent of the country’s population. It’s a beautiful and historic place to visit, home to big businesses and tourist attractions alike, but no one’s about to mistake it for an economic powerhouse.

Lots of planning and due diligence came together in March 2018 to change this perception. Schauffhausen’s economic promotion team quietly unveiled an autonomous public bus as the new killer feature for this canton’s brand of small town living. It’s called Route 12, and it connects an area called Industrieplatz with the town center of Neuhausen am Rheinfall. It runs 365 days a year, every ten minutes between noon and 4 PM.

Here’s what you’ll see when you catch your driverless ride:

And a shot from inside the vehicle:

Cutting a flattering line between publicity stunt and proof of concept, Route 12 is a fully integrated piece of public transportation infrastructure for use by the Swiss public. The bus moves right down the road under its own control, navigating among conventional cars, pedestrians, and cyclists. It carries up to 11 passengers at once, and there’s always a human supervisor aboard to prevent the bus from getting stuck.

During my ride, the “driver” used an Xbox controller to steer us around a double-parked vehicle that would’ve otherwise flummoxed the system. Despite a little human involvement to make it work, this is a compelling demonstration of the future of transportation.

Schaffhausen’s driverless bus came out of Swiss Transit Lab, a conglomerate of local organizations that teamed up to make this small-town driverless dream a reality. The economic history of Schaffhausen is primarily one of watch design and weapons manufacture, so the canton has a number of initiatives underway to remake its image. A former weapons factory on the edge of town is currently being remodeled into office and apartment space, for example. But as the driverless bus is up and running today, it’s probably the most public face of Schaffhausen’s transformation.

Big cities ought to take a cue from Schaffhausen’s hustle. Not only is the canton is using cutting-edge technology to figure out how the next generation of Schaffhausers will live in and move around town, but it’s redefining its story at the same time. Where the history of the area suggests it might be sleepy and unremarkable, Schaffhausen’s decision-makers are placing big bets on reshaping it as an affordable tech hub with easy access to Zurich.

This is only the beginning for Route 12. The map below shows the current active route in red, but the planned expansion marked in purple will come at a later date. Route 12 will soon shuttle tourists to Rhine Falls, the largest waterfall in Europe.