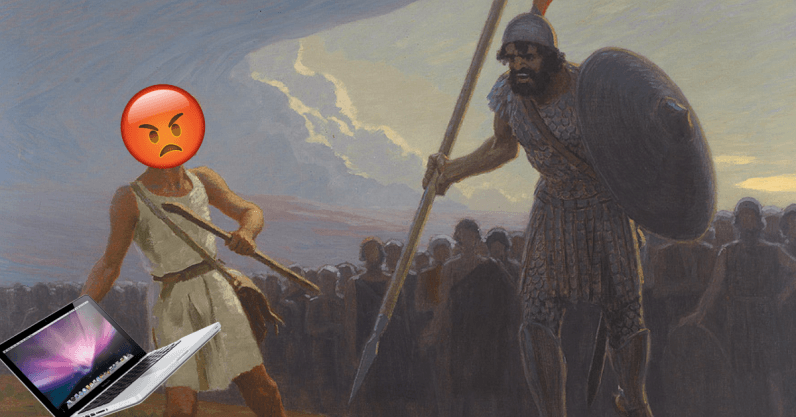 My fellow entrepreneurs, inventors, engineers, and problem solvers – this is the age of the startup, period. Technology is accessible, the money is currently flowing, and people (the market, users, customers, and humans) are receptive to change. In fact, not just receptive, but welcoming.

Tesla is outselling Mercedes-Benz. Just last month Casper put Mattress Firm out of business. A new crop of guys and gals have been left a slightly more paved road to creative fulfillment by those big disruptors who started in a garage, then set the world on fire. All industries and categories are up for grabs.

So yes, the good news is your time is now. The bad news? Most of you will fail.

If you’ve decided to disrupt – to look at old, antiquated, and often unfriendly ways of doing things and make them better – then you just picked a fight with the best in the business.

These companies are bigger than you, have more people, more money, and more time to make mistakes. Bottom line — they have all they need to trample you without anyone even hearing a peep.

But what these major businesses have in resources, startups have in intuition and the freedom to follow it. Your weapon against them isn’t just your services and products, it’s the ability to funnel that intuition and freedom into a vision that’s crystal clear. But how exactly can you tell if your vision is a game-changer or destined for the failure pile?

Your vision must start with serving people before serving itself. Over the last few decades, business culture in the western world has been driven by a quest for growth. However, a company-defining inspiration driven by growth for growth’s sake has weakness built into its foundation.

Growth serves itself first and attempts to dominate with brute force. Instead, startups should be nimble, inspired, driven, and haunted even by the idea of “making it better”.

If you look around at the successful disruptors today, you’ll realize that they have succeeded at one common thing — solving problems for people first. This is a very different driver than “We need to grow by x percent every year” and it also has very different outcomes.

Growth for growth’s sake looks at current culture and attempts to reflect back something it already identifies with. The inspired identify poor experiences or new opportunities and are obsessed with offering that new thing in that new way. Improving the human experience, big or small, should be at the core of every fight a challenger picks today.

Casper, for example, recognized that the mattress buying process was an “awful experience”, that margins were extremely high, and that there were too many options for a normal person. They addressed these misalignments with the market by setting out to make the process easier to buy and return a mattress.

Similarly, shaving and grooming success story Harry’s set out to solve three consumer pain points – a locked razor blade cabinet, expensive components, and undifferentiated options made the buying process frustrating. By delivering one razor with cheap blades directly to the doors of consumers, they solved the pain points simultaneously.

If you’ve ever been on LinkedIn, or even just the internet, you’ve probably been challenged by an article, column, or keynote to “grind” or “hustle” your way toward your goals. But grinding is loud and, frankly, obnoxious. It may also be the quickest way to an ulcer or worse because of perpetual dissatisfaction and the poison of comparison.

Vision is a funny thing. It must be shared and “bought into”. But that only happens, in the way that hits you at your core, if that vision is personal and comes from the honest place.

Vision is a luxury, one of the many things to be utterly grateful for when you’re a budding start-up, that the Goliath’s of the world simply don’t have. It’s a valuable advantage. But the noise of today’s grind culture means finding it is extremely hard.

It’s loud out there so in order to find that driving vision, you have to get quiet. Turn down the volume of other stories, because while they’re valuable to hear sometimes, they’re not your own.

Though it may sound strange, easy to talk about, and to hard to actually execute, the best approach to finding your vision is through meditation. Slow down, don’t speed up.

Steve Jobs was said to have begun meditating at 19. Arianna Huffington also began at a young age and says it played a huge part in her many accomplishments. Bridgewater Associates’ Ray Dalio credits meditation as the single biggest factor in his success. The list goes on and on.

Step 3. Make a promise, then over-deliver

As creators and makers, we overcomplicate, or misunderstand, our value often. We invest in technology and hairsplitting complexity that is necessary to offer the product but beside the point that it offers the customer.

Too often we forget that our solutions are in fact transactional, requiring a promise of something desirable and often an over-delivery on that promise. A vision can’t just serve up what you’d expect. It needs to give you something more.

Clothing brand Bonobos comes to mind. The company sold, ostensibly, the same product that consumers could get elsewhere, so instead of trying to reinvent pants, they over-delivered on their promise of great products by making shopping for pants a great experience.

Ultra-responsiveness became a tenet of their insanely great service, which ended up being a huge driver of direct traffic, building its powerful brand awareness. Warby Parker did the same in their mission to offer designer eyewear at a revolutionary price, while leading the way for socially conscious businesses.

They accomplished this through technology, leveraging the internet and their “try on at home” policy to get customers to buy into the idea that they could control their eyewear choices and costs.

However, Warby Parker went even further to deliver on their promise. They recognized that eye exams were costly ($50/visit/year) and cumbersome. Plus, other brands had a foothold in POS at optometrists’ offices. So instead of fighting for space in POS, which would translate to higher costs, they took on the exam itself.

They built an app called Prescription Check to replace the traditional eye exam and deliver a prescription to a user at home. Not only did this help recapture sales lost from customers being sold on frames at the optometrist’s office, it helped Warby Parker deliver a seamless experience for consumers that keeps added costs to a minimum.

Listen, I get it. You want to disrupt and you want to do it quickly. But “move fast and break things” isn’t all you have to offer as a startup. You also have a vision – and that’s what really separates you from the Goliaths of the world.

This isn’t an arms race where the person with the most toys wins, it’s a battle of ideas and purpose. So long as you’re focusing on how best to serve the people you’re trying to help, and not just on how to grow, you’ll have a better chance of making the cut.