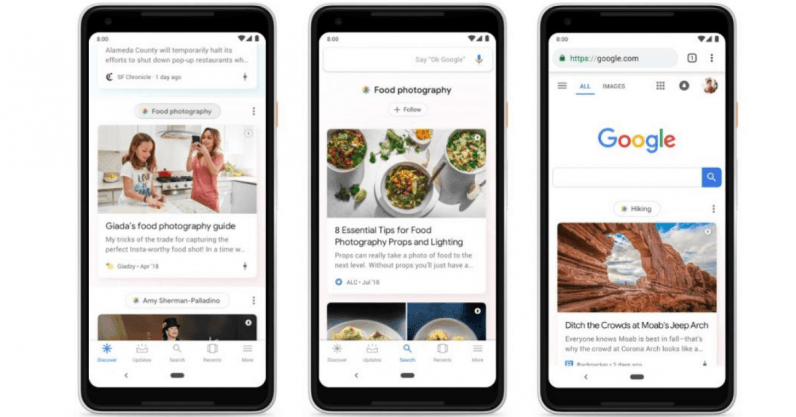 In late October, Google made an important change to its mobile homepage. In place of the traditional page, with a search bar and little else, the homepage now displays Google Discover, the revamped version of Google Feed that was announced in late September.

While there is nothing technologically revolutionary about this content discovery engine, its inclusion on Google’s homepage has important implications for the future of the search engines and the way users interact with the web.

What Google Discover does

The Google Feed was first introduced in December of 2016, a content recommendation engine intended to keep users up to date on topics they are interested in, tailored to their interests based on their user history with Google.

In July of 2017, Google added the ability to “follow” topics from a “follow” button in the search results, as well as the ability to search Google for more about a topic from the feed with one tap.

With the revamp and rebranding to Google Discover, other new features have been added. These include topic headers to categorize the feed results, and the introduction of new types of content including more videos and images, as well as evergreen content that isn’t necessarily fresh but matches your interests and is considered to generate long term interest.

Google also claims that content will be matched to your level of experience and expertise with any given topic you have an interest in.

Additionally, they have added a toggle to each card that you can use to tell Discover whether you want more or less content like this in your feed.

Implications for the future

Google Discover hasn’t generated a lot of buzz, in part because Google’s handling of sexual misconduct scandals are taking center stage. But there is another reason: Discover feels oddly familiar.

Social media is dominated by recommendation engines after all, and users familiar with Pandora or Spotify will find some features familiar.

Then, of course, there is Google’s other big web property: YouTube.

Content recommendation has been central to the way users interact with YouTube. In fact, YouTube’s Chief Product Officer Neal Mohan revealed in January that YouTube’s AI-driven recommendations are responsible for 70% of the time people spend watching videos on the site. In discussing why, Mohan said “Our job is to give [users] a steady stream, almost a synthetic or personalized channel.”

What makes Google Discover important is that it is attempting to do the same for the way users interact with the web at large, at least through Google’s platforms.

By filtering all of the content on the web into a personalized channel for users, Google hopes to become a way for users to find novel content that they wouldn’t find through traditional search.

There are good reasons to suspect that Google’s efforts will be successful. With at least 2 trillion yearly searches to analyze, amounting to at least 63,000 searches per second, Google likely has more data about what content users are looking for than any other company on the planet.

Just how successful Google will be in this endeavor is debatable. It seems unlikely that the Discover feed will take over 70% of the web content we consume through Google the way things have gone on YouTube, but it’s possible.

It’s also possible that Discover will end up as just another one of Google’s abandoned projects, like the failed social network Google+, but there are reasons to think this is the less likely scenario.

Namely, similar efforts by Google to adapt to the mobile era and replace traditional search have been successful, most notably Google Assistant and the Knowledge Graph.

These efforts to take over user workload show no signs of stopping either, with Google demoing Google assistant making phone calls and promising that this technology is coming to users.

Other recent developments also hint that Google hopes to become the platform through which people interact with the web, rather than just a way to search it. In one notable example, Google’s Chrome team is currently considering ways to represent online identity besides the URL.

We don’t need to rely on clues and breadcrumbs like these to recognize that Google is changing the way they are thinking about their product, however.

They announced themselves that they are entering a new chapter for search that aims to replace “answers” with “journeys” that allow you to pick back up where you left off, that places more emphasis on finding information without needing to enter a search query, and that search will become more visual in the future.

But these developments come with a new set of concerns and questions about how we will interact with the web in the future. The more Google and other content recommendation engines tailor and personalize the user experience, the less control we have over that experience.

Concerns about filter bubbles, how they can blind us to other points of view, radicalize us, or discourage us from being active consumers, are not without warrant.

If history has taught us anything, technology is never uninvented. Something about Google Discover feels as though it’s been very inevitable, almost as though it should have been here years ago.

The future of the web is almost certainly one where the average user has less direct control. What that means depends on how our society adapts.

Read next: Yes, GPS apps make you worse at navigating – but that’s OK