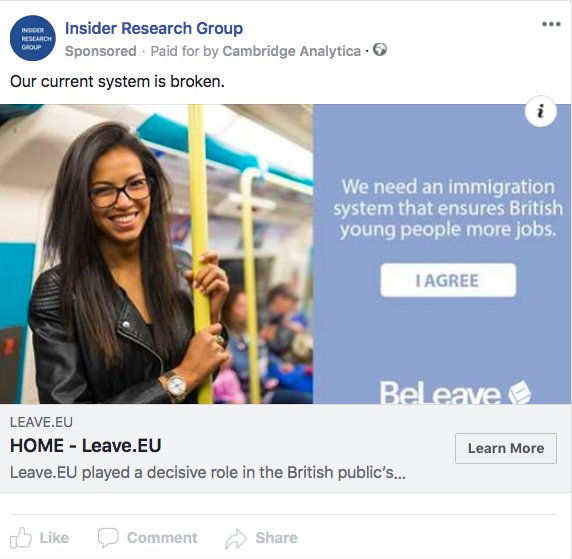 Facebook may well look back on 2018 as its annus horribilis. From the Cambridge Analytica  scandal in March, to a data breach affecting 29 million users in September, from accusations of fraud over misrepresentation of video viewing figures, to claims that it is destroying the very fabric of society, the social network’s reputation has suffered a battering.

Much of this criticism is entirely warranted. But Facebook’s ham-fisted attempts to address the most pressing concerns around disinformation have fallen flat.

Earlier this month the ad giant rolled out new transparency rules that would force political advertisers in the UK to publicly declare when they had paid for an advert. The scheme has also been established for the US and Brazil.

But the new rules are a fiasco! Business Insider was able to run adverts as being “paid for” by Cambridge Analytica, while Vice posed as US senators and ISIS to buy political ads and Facebook fell for every single one.

But look for that Business Insider “Leave” campaign advert in the Ad Library with the search term “Brexit” and you will not find it. Furthermore, Facebook would have us believe that only three accounts paid for Brexit-related ads in the whole of the UK in all of October!

As we grapple with the scourge of widespread disinformation, so-called “fake news” and bot armies trying to manipulate public votes, a “follow the money” approach is not a bad idea. Various countries around the world have clear electoral laws relating to political campaigning based on this very principle. In Ireland for example there are limitations on receiving campaign funding from abroad.

Unfortunately many electoral laws are outdated. In the run up to Ireland’s abortion referendum earlier this year, Facebook ran ads campaigning on the issue without disclosing who had paid for them or where those paying were from. In the end Facebook decided to suspend all foreign-funded ads a few weeks before the vote. Too little, too late?

It is this that prompted the new Ad Library that lists who has paid for political ads, and lets people search for “ads related to politics or issues of national importance.” The library also shows the duration of the ad, a range for the amount spent, the number of impressions, and demographic information and location related to those impressions. It will also show whether the ad is active or inactive and if an ad was active but was subsequently “disapproved”.

The ad, ostensibly supporting the Leave.EU campaign, created by Business Insider is one of those. In response to the article, Facebook said: “This ad was not created by Cambridge Analytica. It is fake, violates our policies and has been taken down. We believe people on Facebook should know who is behind political ads they’re seeing which is why we’re creating the Ads Library so you can see who is accountable for any political ad. We have tools for any one to report suspicious activity.”

But check out how user-friendly the Ad Library is: Selecting the UK and entering the search term “Brexit” does not return the purported Cambridge Analytica advert. In fact only 46 ads with the term Brexit were returned. One from campaign group “Leave Means Leave”, which ran for a week, three from Martyn Day MP, and the remainder from Best for Britain. Is it really credible that only 3 accounts paid for Brexit-related ads in the whole country for the whole month?!

By contrast, there were around 80 Brexit-related adverts in the US. Paid adverts came from organisations  ranging from news outlets to investment advisors, politicians to think tanks. Type in “Trump” and you will get more than 50,000 results in the US. “Bolosonaro” in Brazil nets around 8000.

This exposes further shortcomings of Facebook’s supposed “transparency” tool. As the Vice and Business Insider investigations showed, anyone can game the systems and fool Facebook into accepting their adverts.

But concerned users who want to look up adverts using what seem obvious search terms will not be shown what they expect. If a Leave.EU advert is not categorised as “Brexit”- related then how on Earth can the public be expected to find it?*

I have some sympathy for Facebook struggling to deal with nebulous terms, bad actors, and inconsistent laws – I don’t really think this should be Facebook’s job. As democracies we need better, more up to date, national laws relating to electoral campaigning and the proper independent authorities to enforce them. On the other hand, Facebook makes an obscene amount of money from this sort of advertising, so they should have the resources to manage it ethically.

I worry that this poorly implemented “transparency tool” will create the illusion of accountability with very little real effect.

*If you do want to find the Business Insider ad, use the search term “EU”.