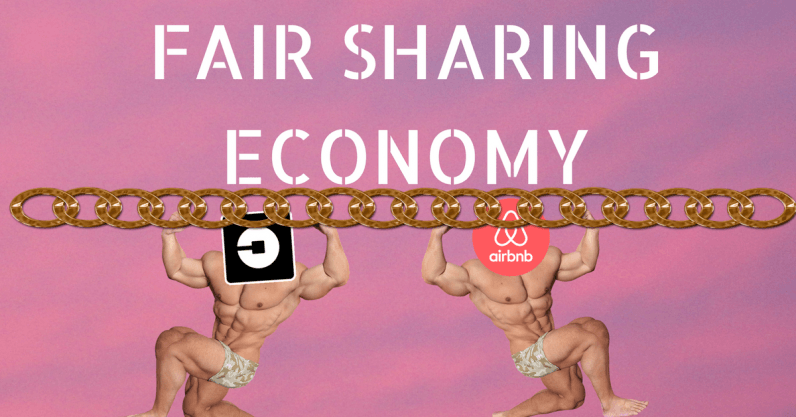 Early sharing economy enthusiasts had a clear vision for the peer-to-peer marketplace: path towards sustainability, empowerment of individuals, and new job opportunities for the disadvantaged. However, the sharing economy’s giants such as Uber and Airbnb quickly overtook the marketplace, painting a vastly different picture.

While they provide convenience and efficiency, there’s a price to pay: low wages and job insecurity. As a result, we’ve seen a number of workers across the globe take it to the streets to voice their dissatisfaction with unfair work practices.

And these workers are not just talking the talk; they’ve also started walking it. A number of them united to start or join platform cooperatives — platforms owned and governed by the workers, users, or both. While these platforms aim to reinvent Uber and Airbnb by using cooperative principles, they are struggling to get on the radar of consumers. But blockchain is coming to the rescue.

It’s promising to make trust, reputation, and coordination possible without the need for centralized authority. So I wonder, how would the sharing economy world look if it was run by the users, for the users?

This is how Uber and Airbnb create and capture value

The so-called “sharing economy,” pioneered by platforms such as Uber and Airbnb, is a marketplace for exchange of goods and services powered by digital technologies. Platforms bet their fortunes on people’s willingness to share their cars, homes, and even dogs with complete strangers. And it’s paying off. Uber, valued at $48 billion, is currently the second most valued tech startup in the world (behind Didi).

The way platforms earn their money is by connecting individuals to one another. In other words, their competitive advantage lies in their ability to exploit network effects. Meaning, the more users they have on one side of the platform, the more attractive is the platform for users on the other side.

For instance, the more Uber drivers join the platform, the more is the platform attractive for the passengers, and the other way around. Therefore, workers and users are at the core of value creation.

The value created by workers and users on these platforms is, however, captured by the platforms that facilitate transactions. The platforms are going even further to tap into communities and leverage individuals’ skills and talents. Airbnb recently launched “Experiences,” so for every tour guide a person offers or a cooking class he gives, Airbnb takes a 20 percent cut. Airbnb also decides which “experiences” are appropriate. Therefore, platforms not only capture a big chunk of the generated value, they also make decisions that affect communities.

Blockchain is promising to level the playing field. If in right hands, it could enable individuals to transact directly with one another without the need for centralized authority, while promising the same, if not superior, security levels. In addition, profits could go back to the community that generated them.

Sounds like a distant dream, doesn’t it? But it’s actually not that far from becoming a reality.

The rise of platform cooperatives

Cooperatives existed since the 19th century and in the long-run, they proved to be more successful and resilient to economic crises. Despite this, they’ve never become mainstream. But the sharing economy has given cooperatives a chance to be reborn, this time as platform cooperatives. While they offer alike services to Uber, Airbnb, TaskRabbit, and Bla Bla car, they differ in ideology.

Up&Go, currently operating in New York is a platform cooperative version of a popular platform Helpling. It connects house cleaners to customers. Workers realized that if they unite, they can make their own decisions and capture all the profits. Partago, a cooperative version of Bla bla car, offers car sharing of electric vehicles. Community members can also get together, purchase an electric vehicle, share it with other communities and get returns on the investment, while a small portion goes back to the cooperative for administrative purposes.

Despite cooperatives’ good intentions, they have difficulty of acquiring venture capital, which prohibits them from being an early-entrant and leveraging network effects that made Uber and Airbnb rise to the fame. In addition, cooperatives struggle with efficient decision making and they still need to facilitate trust like other platforms. But blockchain is promising to provide exactly that, giving platform cooperatives a needed push.

Blockchain is probably one of the most radical technologies today. Some prescribe the existence of institutions themselves to the cost of transactions. Blockchain is making those transactions practically costless, shaking the very foundations of capitalism. While this technology has many advantages, as well as flaws, in the case of sharing economy, it can be an extremely valuable asset.

This is how blockchain can assist platform cooperatives:

Blockchain can make trusting one another possible without the need for centralized authority. Members of the cooperative can define a set of rules that would be enforced by smart contracts.

For instance, members can decide that each new member must be trusted by at least three other members in the network. Smart contracts would then insure this condition is met.

This idea of “distributed trust” could be carried onto insurance. Each existing member would need to place a monetary value on the trust of a new member.

If the new member does not deliver a desired service (clean rental apartment), the members that vouched for him would take a hit. This could reduce free-riding and create a community that enforces trust and cooperation.

With centralized systems such as Airbnb, the platform decides which reviews are to be shown. With the blockchain, on the contrary, once something is written, it stays there forever.

Cooperatives have historically struggled to organize efficiently. Blockchain could make decision making easier than ever. Members of the cooperative, all over the world, could digitally vote for various issues. Blockchain ensures that each member stays anonymous and that the system cannot be hacked. One startup has already developed digital ballot boxes.

Finally, generated profits could be shared among the members of the cooperative. Blockchain could record each member’s contribution to the platform and compensate the person accordingly.

Blockchain technology is far from perfect and platform cooperatives have a long way to go to be seen as real competitors of platforms like Uber and Airbnb. But the times are changing and if people are already comfortable with sharing their personal goods and offering services to complete strangers, the day may come when they will unconditionally trust one another and engage in collaborative ownership, with one word doing the magic: blockchain.

Read next: The 'Roomba of toilets' exists only to clean your skid marks