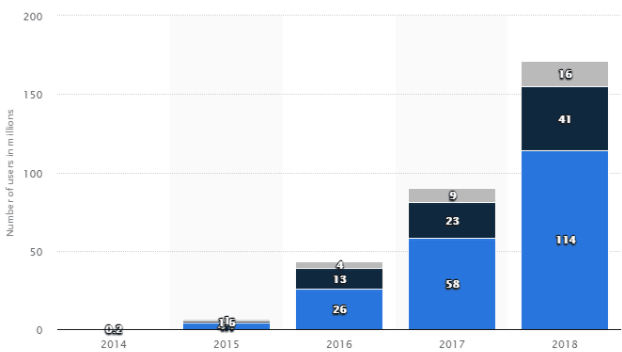 One of my predictions for 2018 is that virtual reality (VR) will become more mainstream. When you look at the growth trajectory of the VR industry over the past few years, it is clear that only great things lie ahead. For one, just a few years ago (in 2014), there were about 200 thousand active virtual reality users.

This increased to 90 million active users in 2017, and It is projected to increase to 171 million users in 2018 (almost double that of 2017). Here’s a growth chart courtesy of Statista:

Surely, this is an exciting industry to pay attention to, but what are the trends to watch out for? Here are my predictions:

According to research from Omnivirt, 360° videos received higher engagement in 2017 than regular video and content. This data was based on analysis of video completions, clicks and overall engagement from 1,000+ campaigns. The Omnivirt study also found that besides the fact that brands using 360° videos were spread across all verticals, content quality is improving every year.

Major brands that have used VR and 360° videos include NASA, Microsoft, IBM, Honda and Ford. In fact, Youtube’s channel dedicated to 360° videos now has almost 3 million subscribers. Going forward, you can expect to see increased adoption of 360° VR videos on a much larger scale.

2. We will see more VR adoption in advertising

What will be the catalyst for the growth of VR is more mainstream adoption as I predicted in my article last year, and one of the things that will drive this is adoption of VR by the advertising industry.

We have already seen signs of this in the recent past: last year Google announced its experiment with virtual reality ads that react to users’ eyes, Infiniti formed an alliance with OmniVirt to let people virtually test drive the Q60 using 360° VR video and Chick-fil-A launched a VR website around its “Eat Mor Chikin” Cow icon. While these are just very few examples of VR marketing in action, you can expect to see more VR adverts in 2018, and these ads will further drive the growth of the VR industry.

3. A rise in VR developers

The growth of any industry will only be commensurate with the ability of the talent in that industry. While the VR industry is poised for more exponential growth, this can only be threatened by availability of talent to enable this growth. There is no stopping this beast, however, so you can expect an increase in demand for developers with VR skills.

In fact, industry giants are already making moves to encourage VR content producers; in Google’s last year experiment with VR ads, the tech giant stated that its goal is to help producers make money to fund their VR content.

Perhaps more important is the fact that VR will get even realer — in other words, we can look forward to development that will lead to a more immersive experience.

Just recently, HEAR360 was in the news for introducing the 8ball “omni-binaural” microphone that captures 360 degrees of audio by using 8 omnidirectional microphones — this leads to a more immersive sound experience that provides the ability to hear sound in front of, above, below, around, or behind the listener’s head. In other words, a more immersive sound experience.

This is a big deal for producers of VR 360 video content, an innovation that will come in handy in increasing the use of VR in advertising (prediction #1).

And this is just the beginning.

There are predictions that VR gadgets that engage our nose’s sense of smell and our skin’s sense of touch are closer to reality than they are farther. In other words, you can certainly look forward to a more immersive experience in 2018 and beyond.

Just last year, both Oculus and HTC engaged in what appeared to be a price competition with both brands almost simultaneously cutting the price of one of their products by $200. You can expect to see more of this in 2018 and beyond.

Whether software or hardware, VR will only become really mainstream when its products are easily affordable to the average Joe. Most VR gadgets are on the high side, costing thousands of dollars apiece and unaffordable for the average Joe. You can expect this to start to change going forward. In 2018, and beyond, VR products will become more available, and as a result there will be a gradual price adjustment that makes them more affordable to the masses.

Read next: Android Wear may soon be renamed 'Wear OS'