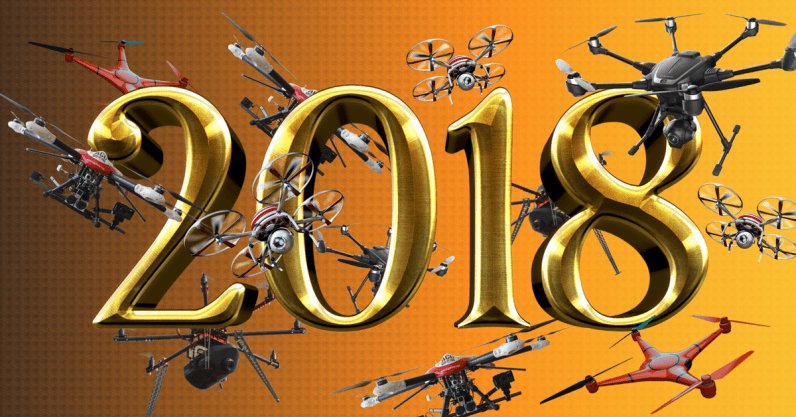 Perhaps I’m biased due to my passion and business, but to me, 2017 was the year drones became mainstream. Initially a military innovation used for covert missile strikes and aerial reconnaissance — drones have evolved to become a novelty toy, readily available in any main street store.

And as with so many other technologies, entry into the consumer market has led to abuse: pranksters spying on neighbors, criminals smuggling drugs and terrorists converting drones into homemade missiles.

But there’s great news, too. Commercial drones have proven their worth, saving lives during hurricanes Irma and Harvey, reducing labor costs through infrastructure inspections and improving border security.

I’m optimistic about what drones have to offer the world. With an expected total addressable value of $127 billion by 2020 — in markets such as security, infrastructure inspection, and agriculture – here are four reasons I believe 2018 will be the defining year for the commercial UAV industry, far surpassing anything we saw in 2017.

1. The technology will evolve

Drone technologies will develop to enable fully autonomous operations and increased Beyond Visual Line-of-Sight (BVLOS) missions. What does this mean practically? Today, someone flying a drone must be able to see that drone in the air — the drone may not leave their line of sight. However, BVLOS means the operator can be in one place, while the drone is doing its job in another, making it significantly easier to support security and surveillance systems.

Today all drones work on a “node-to-node” basis — one controller is connected to one drone — but this will also change in 2018. The introduction of MESH networks will allow drones to simultaneously connect to the same control center and also interconnect with each other, enabling individual drones to “talk,” exchange data and streamline activity.

Right now, drones are mostly “flying cameras” that collect data. The drone returns from its data collecting mission, and then an operator analyzes the footage. In 2018, we’ll see stronger processing power that will allow drones to become smart sensors, integrating computer vision and neural network technologies to analyze data on the surroundings and mission in real time, autonomously, without the need for human direction. This adds up to drones independently making decisions and taking care of business.

All this will culminate in the establishment of swarm technology. Like insects in a colony, factories will comprise workforces of drones, performing their tasks and working together.

Each of these changes are exciting, but when you put it all together, drones will be a game-changer for multiple fields in 2018.

Based on what I’ve observed in the market over the past couple of years, law enforcement, security, and first response will be the first to implement drones in a significant way. Drones proved their worth last year, delivering emergency relief supplies in Texas, Florida and Puerto Rico.

Crucially, these markets are also the most willing to pay for drone tech, as they’re already paying for tools that perform the same “jobs” in an inefficient manner — either very expensive helicopters, or consumer drones with limited capabilities. Eventually, commercial-grade drones will be among the everyday tools used by fire departments, police forces, border security, and emergency response teams.

Security organizations, in particular, will be able to fully integrate drones into their more comprehensive closed security systems, which might include smart fences, security cameras and sensors. And full integration allows each of these elements to be controlled from the same central command center.

These early adopters will lead by example — other industries will see the benefits of drone-based solutions, eventually making commercial drone technologies ubiquitous across industries. And from what we’ve been seeing, this will be happening fast.

We’ve been conditioned to think regulation limits growth. But with drones, it’s actually a good thing. As the technology progresses, producing drones with greater capabilities and increased BVLOS operations (drone operation from a remote location), regulation will advance in favor of professional drones. These regulations will also address genuine concerns over privacy, safety and national security.

We’ve already started to see this shift following reports of cartels using drones to smuggle drugs and ISIS weaponizing drones against allied troops. Unusually for the commercial sector, developers will be in favor of stricter regulations on consumer drones, as they will create greater opportunities for professional drone use.

In fact, this past summer, the US government began talks with drone developers to discuss the expansion of commercial drone operations. Additionally, the U.K. government introduced tougher regulations to crackdown on dangerous flying and criminal drone use.

As such, I believe we’ll see increased regulation on the consumer drone market in 2018, limiting the opportunities for criminals to strap bombs and other weapons or contraband onto a drone purchased at their local Radio Shack, and helping the commercial market spread its wings (pun intended!).

4. The drone business model will shift

As technology advances to make drones more user-friendly and affordable, organizations will shift their business strategies accordingly. As the technology evolves towards fully autonomous UAV solutions, we will remove the need for human operators, and enable a business model that is based on Drones-as-a-Service.

Specific industries that don’t want to create a dedicated “drone division” will begin leasing drones, which will then be integrated into their own closed systems, according to the application they need, enabling them to extract the value from the data without having to operate or maintain the drones themselves — that’s the beauty of outsourcing!

These new business models will eventually open up the industry to more stakeholders, allowing new players to get in on the game, developing new use cases for autonomous drones.

These four factors have the potential to completely transform the commercial drone space. 2018 is the year we’ll see it happen.

Capabilities will increase as complex aeronautical technology is simplified into accessible and easily integrated products. Meanwhile, adoption will increase along with the realization that autonomous drone platforms can meet the demands of countless applications across multiple industries. Hold on tight, this year is going to be a heck of a ride.

Read next: This engineer fixed his own heart with a mesh sleeve